The Congolese army has pushed Rwanda’s M23 back by about four miles in recent days, and U.N. envoy says that their success makes this a good time to negotiate. Jean-Mobert N’senga, an activist lawyer in Goma, and his group, Fight for Change, agree but say the DRC needs to negotiate with Rwanda, not M23.

KPFA News Anchor Anthony Fest: Rwandan troops have been amassing at Rwanda’s border with the Democratic Republic of the Congo, now that the Congolese army, supported by the U.N. Force Intervention Brigade, has pushed Rwanda’s M23 militia roughly four miles back towards the border. 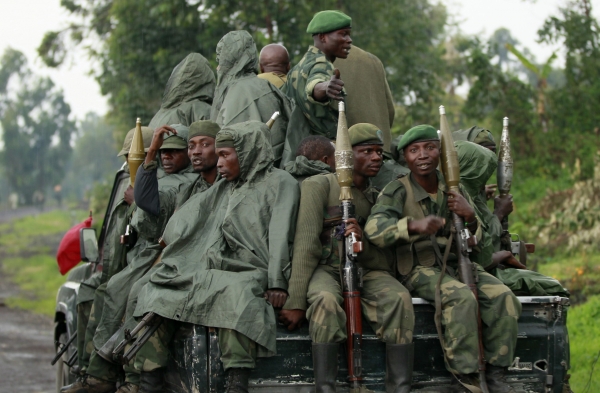 This has caused fear of another conflagration on the scale of the First and Second Congo Wars, both of which began when Rwanda, Uganda and Burundi invaded Congo, first in 1996 and then in 1998. A peace treaty was signed in 2003, but the conflict has continued off and on since, and the death toll is estimated to be between 5 and 10 million. Most have died of hunger and disease after fleeing the fighting. KPFA’s Ann Garrison has the story.

KPFA/Ann Garrison: In March 2013, roughly a year after Rwanda’s M23 militia resumed the war in Congo’s Kivu Provinces, Congolese historian and activist BK Kumbi burst in on U.N. Secretary General Ban-Ki-Moon in Geneva to accuse him and other politicians of refusing to name Rwanda, Uganda and Burundi as the aggressors.

BK Kumbi: But what about people of the Congo, PLEASE? What about people of the CONGO? You don’t say anything about that. There’s been killed 8 million people and you’re making fictitious peace, and you’re telling us that this is peace, when aggressors are not named. Rwanda has been known … has … is responsible of what is going wrong in the peace, in Congo, and nobody says something about that! Burundi! Uganda! You should say that!

KPFA/Ann Garrison: Today U.N. envoy Mary Robinson arrived in Goma with U.S. envoy Russ Feingold and African Union representative Boubacar Diarra. The three were coming from Congo’s capital Kinshasa and will go from Goma to Rwanda, then to Uganda for more of the peace talks that began in 2012.

Robinson said that the Congolese army’s military success made this a good time to resume the peace talks. But, Jean-Mobert N’senga, a young activist lawyer in Goma, told KPFA that he and his group, Fight for Change, consider the talks a diversion and say that his country, the Democratic Republic of the Congo, needs to negotiate with Rwanda, not M23.

Jean-Mobert N’Senga: We say Kampala talks are not the good way to go because the United Nations has recognized that Rwanda is backing this M23, in troops, in strategies, in material, and if DRC needs to negotiate with someone, it must be with Rwanda, not with M23, which has no self-existence. 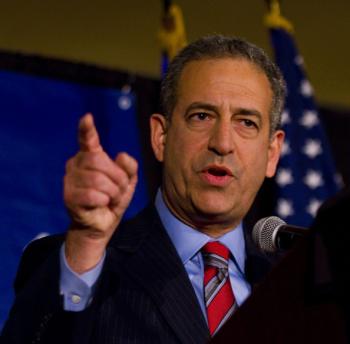 The U.S. has been the dominant foreign power in the region since an alliance of Congolese rebels and Rwandan and Ugandan troops overthrew Mobutu Sese Seko in 1997, at the conclusion of the First Congo War.

Author’s postscript: I had a much longer conversation than I was able to air on KPFA with young Congolese activist lawyer Jean-Mobert N’senga of the group Fight for Change. The essence of it was that Kampala peace talks avoid the main issues to be negotiated. The first is land inside the borders of the Democratic Republic of the Congo. Because Rwanda can make only a pre-colonial claim to land inside the borders of the DRC, it has been backing faux “Congo rebel” groups commanded by top officers of the Rwandan military.

The second issue is the end to impunity and the question of who will be brought to justice by whom. This has been, to now, a political issue largely determined by the Western powers who dominate the region, the U.N. Security Council and the international courts created by the U.N. – Ann Garrison