Tuesday night, Sept. 10, the Richmond, California, City Council held a meeting packed with hundreds of community members, many of them in bright yellow ACCE T-shirts, who rallied to defend the Richmond CARES principal reduction plan that has inspired hope nationwide and a Wall Street-led campaign of threats, litigation and a deceptive election-style effort to sway public opinion. Late Tuesday evening after hearing testimony from 64 speakers, most of whom urged the Council to defy Wall Street and move forward with Richmond CARES, the City Council rejected a motion to cancel the program and voted 4-3 to form a Joint Powers Authority to enact local principal reduction, taking the next formal step to advance the plan.

The Richmond CARES Program would utilize the local government’s ability to enact eminent domain to seize loans of underwater borrowers at current market value. The program is a partnership with MRP, Mortgage Resolution Partnership, a San Francisco based investment firm, which has committed to provide the capital and pay legal expenses if and when the City of Richmond is pulled into a lawsuit, to purchase the loans and resell the notes back to homeowners who have elected to be a part of the program at the current market value. For a city like Richmond, where 50 percent of borrowers are underwater, the program would provide the principle reduction that banks have actively fought against.

The program was met with opposition, mainly lead by Wells Fargo and Deutsche Bank, which have filed lawsuits against the city for considering the use of eminent domain and have made threats to not work with any city that enacts eminent domain. Richmond City Council member Nathaniel Bates introduced legislation that would revoke last month’s passage of the program, stating, “We can ill afford to get in a financial fight with monies we do not have as taxpayers to defend ourselves in an issue of this nature.”

For a city like Richmond, where 50 percent of borrowers are underwater, the program would provide the principle reduction that banks have actively fought against.

On Monday, Sept. 9, San Francisco City Supervisor David Campos announced his intention to introduce a resolution before the Board of Supervisors expressing support for the City of Richmond’s innovative effort to save hundreds of underwater borrowers – Richmond CARES – calling on Wells Fargo and the SIFMA lobby group to stop trying to block the program and instructing staff to explore opportunities in San Francisco to adopt a similar program. The resolution, introduced on Tuesday, Sept. 10, was co-sponsored by Supervisors John Avalos, Malia Cohen, Jane Kim and Eric Mar. 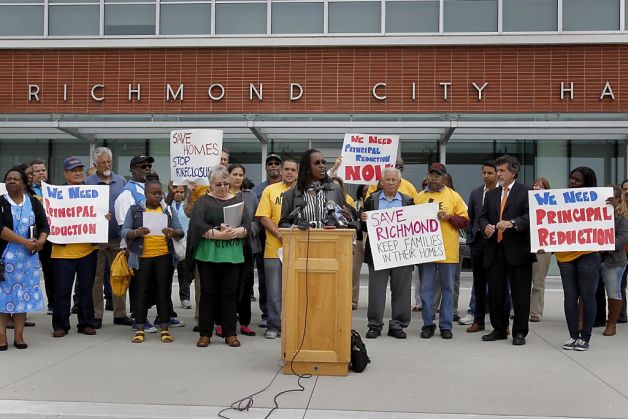 The campaign received a boost Monday when a coalition of fair housing groups came to the defense of Richmond and other communities that wish to explore local principal reduction in an amicus brief for a court case to be heard on Thursday. The brief, filed by the law firm Relman, Dane & Colfax, PLLC, on behalf of the National Housing Law Project, Housing and Economic Rights Advocates, Bay Area Legal Aid, the Law Foundation of Silicon Valley and the California Reinvestment Coalition, argues that the actions the securitization industry has threatened to take to block Richmond CARES would amount to illegal redlining and would violate federal and state fair housing and fair lending laws, including the federal Fair Housing Act.

Tuesday’s vote follows an amicus brief filed Monday by national fair housing groups in support of Richmond CARES in advance of a federal court hearing to dismiss the request for a preliminary injunction filed by Wall Street banks against the City of Richmond. In that brief, housing groups argued that the banks’ threats not to provide mortgages to city residents amounted to illegal discrimination against Richmond homeowners, particularly communities of color.

To support the Richmond CARES program and similar programs being considered in other cities throughout the nation, sign the petition and STAND WITH RICHMOND! Go to http://www.homedefendersleague.org/stand_with_richmond_ca.

Read and share the worldwide coverage of Richmond’s bold plan to keep residents in their homes despite the Wall Street bullies:

Grace Martinez, an organizer with ACCE (Alliance of Californians for Community Empowerment ) and the Home Defenders League, can be reached at gmartinez@calorganize.org.

In a straightforward continuation of the private label securitization industry’s “bluff and intimidate” strategy commenced in the summer of 2012, several banks that “service” underwater securitized loans and accordingly profit by protracted foreclosure, filed a sham lawsuit against the City of Richmond, California, last month. They hoped in so doing to frighten both Richmond and other cities out of purchasing local mortgage loans, writing down principal and keeping families in their homes – all in a manner that benefits homeowners, bond investors and their neighbors alike. 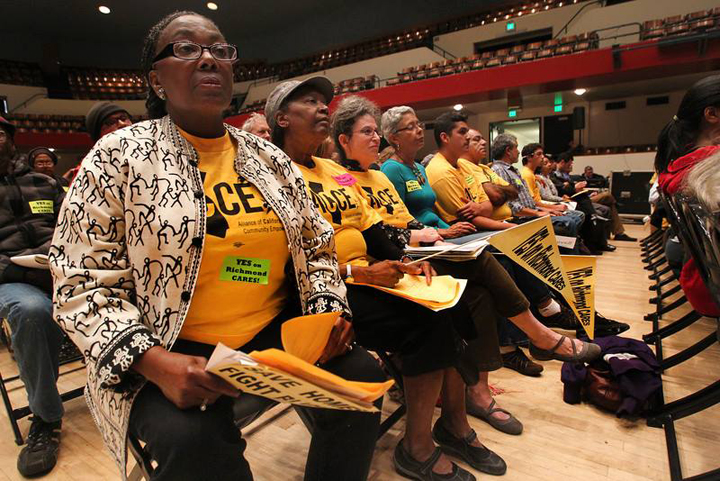 The City filed a response, demonstrating both that the lawsuit was not ripe for decision and that the Wall Street institutions have no bona fide legal case in any event and are simply harassing Richmond to frighten off dozens of other cities now planning to follow its lead. A federal court heard arguments in the case Thursday, Sept. 12, and dismissed the suit just as Richmond had called for.

That is very good news for Richmond, for California and for the U.S. economy.

Mortgage debt overhang is one of the principal impediments to restored economic and fiscal health and has been since 2007. Eliminating mortgage debt through serious principal write downs could do more to boost growth than most recovery and growth plans being talked about by policymakers.

Robert Hockett, a Cornell University Law School professor who is the author of a plan to use eminent domain to purchase underwater mortgages in distressed communities such as Richmond, Calif., can be reached through Cornell’s Media Relations Office, KMC327@cornell.edu.