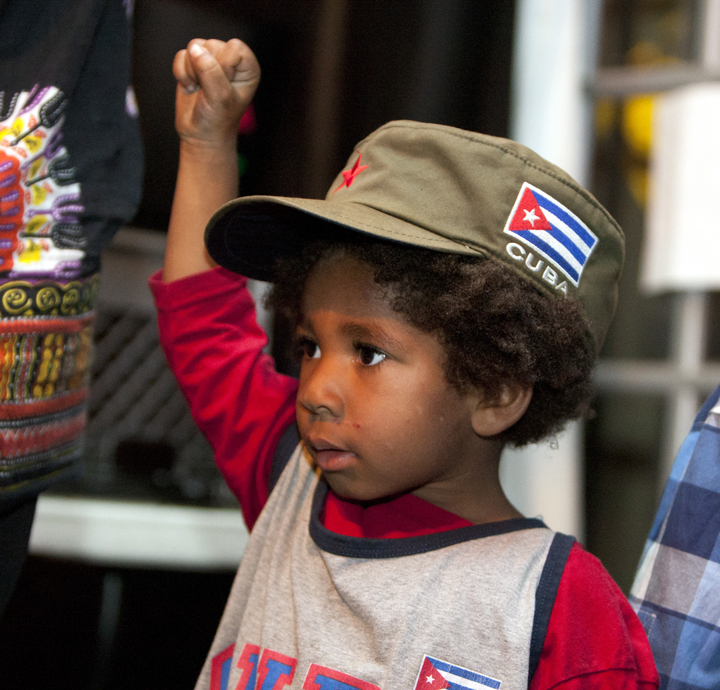 In October of 1966 when Huey P. Newton and Bobby Seale developed and put forward the Black Panther Party for Self Defense 10 Point Platform and Program, little did they suspect the continuum of historic events which they would precipitate and in which they would participate.

By May 2, 1967, 30 fully armed members of the Black Panther Party for Self-Defense and their supporters were in the California State Capitol at Sacramento, California, protesting the infamous Mulford Act. The bill on its face was aimed at banning a U.S. citizen’s right to carry loaded weapons in public, so long as the weapons were “registered, not concealed, and not pointed in a threatening manner.”

In actuality the Mulford Act – or “the Panther Bill,” as it was tagged by the media – was designed to end the BPP Police Patrols that were organized against police brutality in the Afrikan community; as it was the Panther Party’s belief that “armed citizen patrols and the arming of the citizenry as guaranteed by the Constitution were the most effective deterrents to excessive use of police force.”

The alarmed and instantaneous reaction to the fully armed BPP in Sacramento further confirmed this, and then Gov. Ronald Reagan’s signing of the bill into law catapulted the Black Panther Party for Self-Defense into national prominence.

Three months prior to this, in March 1967, the U.S. Federal Bureau of Investigation (FBI) had begun an “internal security” investigation of Huey Newton, prompting then FBI Director J. Edgar Hoover to announce, on Sept. 8, 1968, that the BPP was considered to be “the greatest threat to the internal security of the country.” At the time, the Black Panther Party was barely known outside of Oakland, Calif. 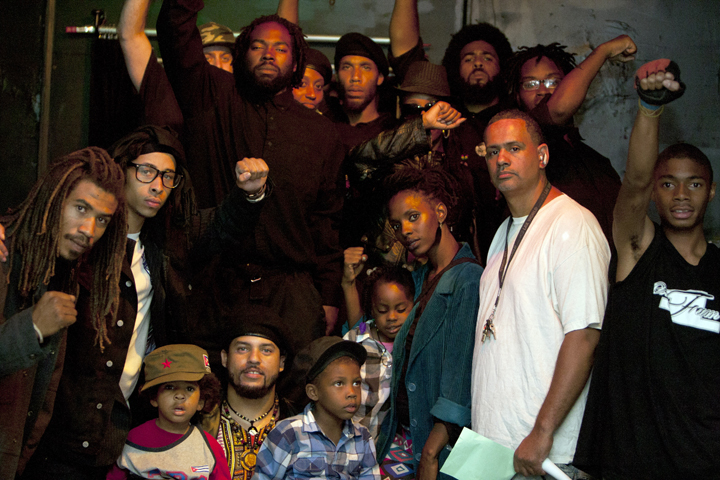 Despite these dire pronouncements, BPP Deputy Minister of Defense for Southern California Alprentice “Bunchy” Carter organized the Southern California branch of the BPP, with a branch office at Central Avenue and 43rd in January 1968, and January 1969 saw the BPP Free Breakfast for Children Program (FBCP) firmly under way at St. Augustine’s Church in Oakland. At that point, membership of the BPP was peaking at 10,000 members within the continental U.S. alone, and circulation of the Black Panther Newspaper had hit 139,000 by 1970.

Between 1967 and 1969, the Black Panther Party for Self Defense not only grew in local, national and international stature, they forged unity with other oppressed people and inspired the formation of the 12- and 13-point political platforms of the Brown Beret, I Wor Kuen and Young Lords political organizations.

By 1980, the Black Panther Party for Self Defense was no more, due to the depredations of FBI Director J. Edgar Hoover’s extensive program – COINTELPRO – of surveillance, infiltration, perjury, disruption, misdirection, police harassment and assassinations of party members within U.S. borders that were designed to make the political criminal.

A critical analysis and well-documented account of this repression was written by Huey Newton, entitled “War Against the Panthers: A Study of Repression in America.” Published first as a doctoral dissertation in partial satisfaction of the requirements for a doctor of philosophy degree in history of consciousness at Santa Cruz University in June of 1980, the thesis was next published in book form for the first time in 1982, seven years prior to the author’s death on Aug. 22, 1989. In the 1996 foreword, Fredrika Newton states, “(I)n kinship to those rare few whose footprints remain in defiance of time, Huey Newton and the Black Panther Party leave a legacy that stands as a beacon from the past to those seeking to cross the abyss of human barbarity.” 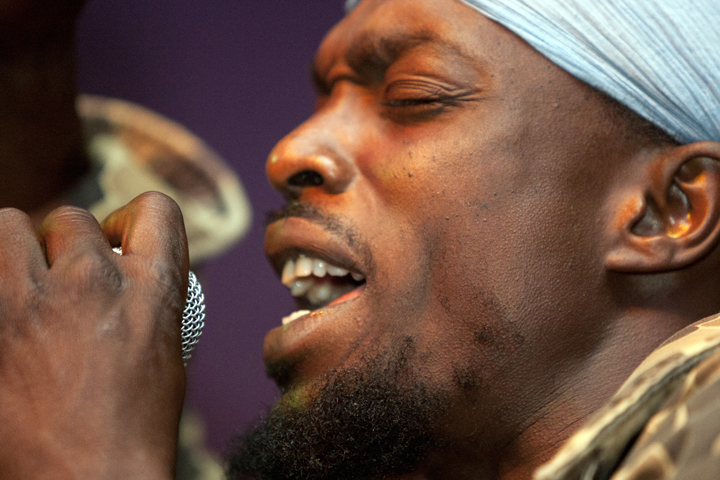 Fast-forward to the 21st century and the formation of the Black Riders Liberation Party.

Formed in the crucible of YTS (Youth Training School in Chino, California) prison, the groundwork for the resurrection of the Black Panther Party – under the official name Black Riders Liberation Party – was created. The formulation of a Black Commune program inside called for many of the points of the original BPP 10 point platform plus some new points: 1) the demand for proper medical care for AIDS victims and 2) an immediate end to the smuggling of crack cocaine into the Black community.

The Black Riders describe themselves as being “faster, stronger, smarter and upgraded.” ((From: The African Inter-Communal News Service: The Black Riders Liberation Party New Generation Black Panthers, Volume No. 1, Fall 2012)) Immediately upon their release, they attacked the problem of police brutality in poor Afrikan communities. “Their determined resistance to police terrorism produced a decrease in police harassment in areas they patrolled.” ((Ibid, p. 2))

The African Inter-Communal News Service states: “Black Riders Liberation Party is the New Generation Black Panther Party for Self Defense and has been organizing since 1996 in Los Angeles and 2010 in Oakland. In serving the people, we have created multiple regularly functioning survival programs that are serving the masses’ interest of self-determination.”

These programs include Watch a Pig, Educate to Liberate and Break the Lock Prisoner Support. They also include a thorough study of effective resistance, in the forms of fearless armed and unarmed community self-defense, which has its genesis in Marcus Garvey’s Black Legion, the Fruit of Islam created by Malcolm X, Robert F. Williams’ “Negroes with Guns,” the Deacons for Defense and, of course, the Black Panther Party for Self-Defense. 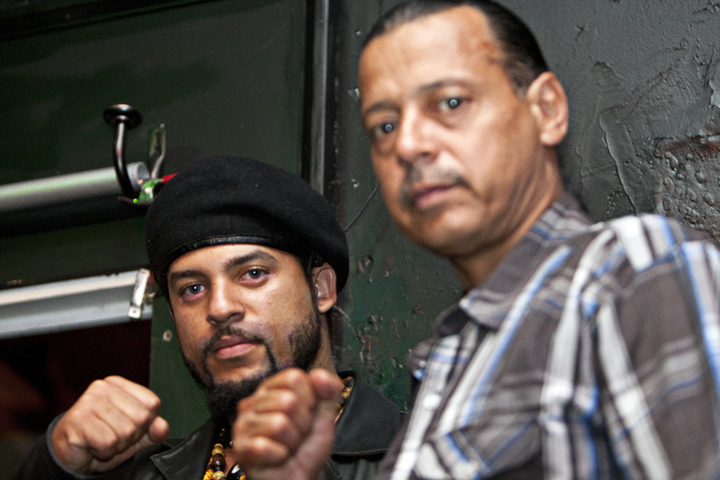 Other serious studies on this subject include the recently published “We Will Shoot Back: Armed Resistance in the Mississippi Freedom Movement.”

From 1996 to 2011, The Black Riders for Liberation Party in Los Angeles forged ties of unity in the communities of Watts and South Central, even as they battled police raids, brutality and assassinations against their organization. According to the 2012 Volume 1 issue of the BRLP newspaper, in April 2002 the 20-year-old BRLP national spokesman delivered a speech in front of San Francisco City Hall and 45,000 anti-war demonstrators denouncing the Patriot Act as racist and urging Afrikan community self-defense and opposition to the so-called War on Terrorism. Six months later he was mysteriously assassinated. No one was ever charged with his murder, despite the family’s appeals to authorities.

“In February 2011, The Black Riders Liberation Party followed in the footsteps of our ancestors W.E.B. Dubois, Malcolm X, Eldridge Cleaver and Mzee Pete and Charlotte O’Neal and more in making the pilgrimage back to the motherland. It was due to the efforts of the Pan Afrikan Peoples Organization (PAPO), the United African Alliance Community Center (UAACC) the Black Riders Liberation Party (BRLP) family members, and others, that there was a Black Rider in Afrika” ((Ibid, p. 3)) at the UAACC compound with Mzee Pete and Charlotte O’Neil in Tanzania. 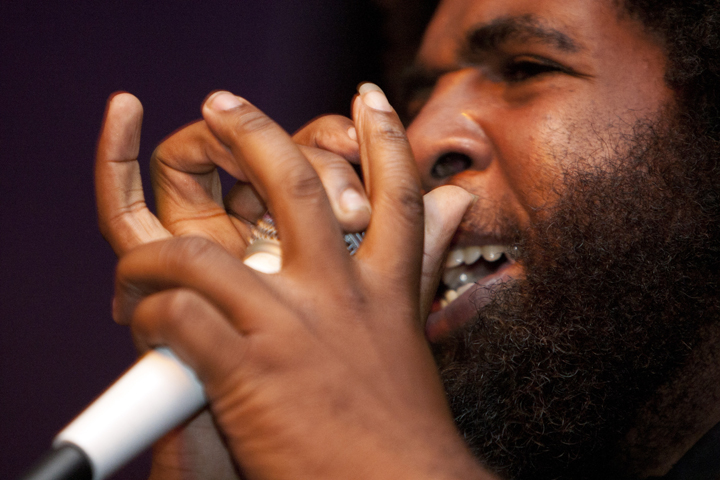 “The Black Riders Liberation Party (BRLP) launched the Inter-Communal Solidarity Committee in Los Angeles, Calif., with a gathering at the Southern California Library for Social Studies and Research on Saturday, Nov. 10, 2012. At this event, numerous activist and community members from different races, philosophies and ideological lines came together to form the Inter-Communal Solidarity Committee. The idea to form this committee comes from our study of the Black Panther Party’s (BPP) forming the National Committee to Combat Fascism (NCCF), which would later become the Inter-Communal Committee to Combat Fascism (ICCF). This paper is a historical analysis of our theoretical framework for this development.

“’Unitary Conduct implies a “search” for those elements in our present situation which can become the basis for joint action. It involves a conscious reaching for the relevant, the entente, and especially in our case the reconcilable. Throughout the centralizing authoritarian process of Amerikan history, the ruling classes have found it necessary to discourage and punish any genuine opposition to hierarchy. But there have always been individuals and groups who rejected the ideal of two unequal societies, existing one on top of the other.’ – George Jackson, ‘Blood in My Eye’

“In analyzing this war we are engaged in today, we can see a lot of political strikes being launched against the most fascist arm of this kkkapitalist government, the Prison Industrial Complex. These are coming mostly from the prisoners themselves, in a series of hunger and labor strikes from Georgia to Ohio, North Carolina, California and more. Many warriors from behind enemy lines have given a much-needed spark of intensity to the Left. Or at least this has happened to the organizations with enough analysis to pay attention. 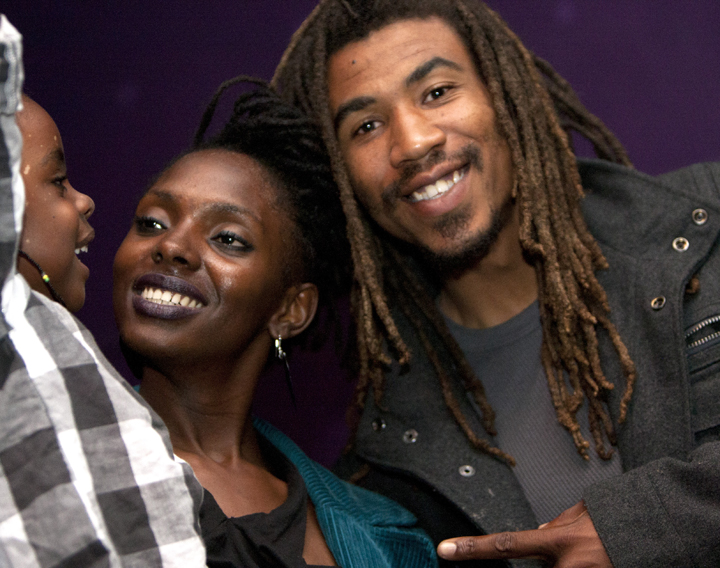 “The ideological swords have been swung! From the belly of the beast we have received marching orders to pick up the pace and be a better reflection of what our comrades are doing in the concentration camps of the enemy! What alternative do we have, when we consider the call put out in September by the Short Corridor Collective in the Pelican Bay SHU?

“’Beginning on Oct. 10, 2012, all hostilities between our racial groups in SHU, ad-seg, general population and county jails will officially cease.’

“Thanks to the courage of the Short Corridor Collective and all the prisoners who have been unifying and working to dismantle the beast across the country, the stage has been set for unitary conduct for the purpose of creating and sustaining inter-communal solidarity.”

Examples of this solidarity and organizing in Oakland are: 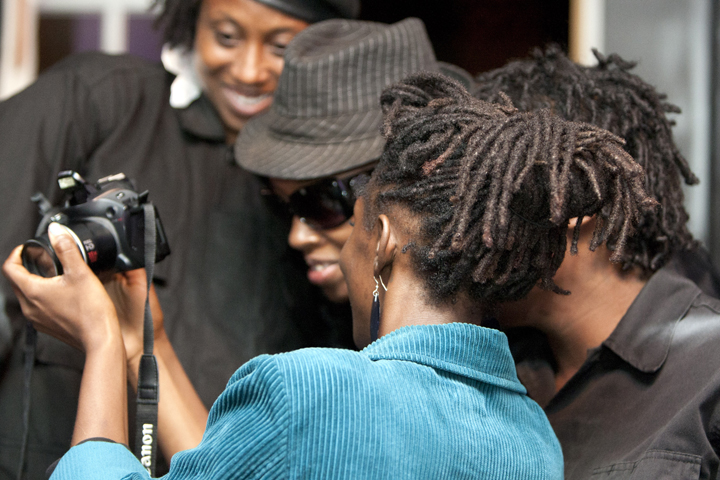 Spanning a length of time deemed the “Year of Black August,” the documentary highlights the work being done by the Black Riders from Aug. 5, 2012, to Aug. 7, 2013, in conjunction with the People’s Community Medics. From Los Angeles and San Diego to Vallejo, Stockton, Fairfield, Oakland and Bayview Hunters Point in San Francisco, film footage includes Oakland programs and events; fighting against police brutality in the cases of Mario Romero in Vallejo, James Rivera Jr. in Stockton and Kenneth Harding Jr. in Bayview Hunters Point; the framing and false imprisonment of Antoine Thomas in Fairfield; and the campaign against unemployment at the Cahill Construction site, also in Bayview Hunters Point. Read a community review and see a trailer of “Let Um Hear Ya Coming,” written by Ms. Incredible on her popular blog, My Current Train of Thought!

The following are a few of the recent community events sponsored in part by the Black Riders:

Hip Hop artist Ms. Incredible sums up the strong community feeling for the Riders in this short poem:

They’re fightin’ for the people ‘cause we been under attack

Dedication, determination and discipline they show

They’re a young group of warriors and each day I watch them grow.

They love, they feel, they cry, they fight, they got a serious mission that they won’t let out their sight …

Liberation of the nation, stand up and give these souls a bow