Oakland, Oct. 18, 2013 – I’m surprised and sorry to be standing here tonight. In all my years in the labor movement, I’ve never seen an employer drive negotiations that were this close to a deal into a strike. 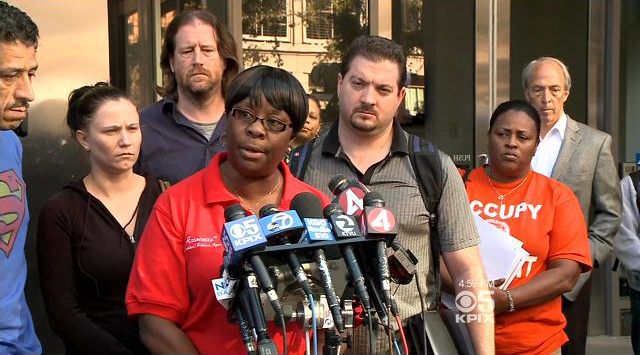 After a marathon 28-hour bargaining session, BART’s two largest unions thought they had the final framework for a deal.

We met BART’s demands on pensions.

We had the outline of a deal on wages.

But after telling the public that their main goal at the bargaining table was saving money to buy new trains, BART management blew up negotiations by insisting that employees sacrifice workplace protections in exchange for economic well-being. This was a poison pill for workers: Choose between your paycheck and your rights.

We had a rough deal on economics. We can’t believe BART is willing to incite a strike over their professed desire to implement an electronic pay stub system and handheld computers in the workplace. This is ridiculous.

BART became the top-rated transit system in America with its current work rules.

What’s more, BART never focused on performance or efficiency issues during bargaining and repeatedly acknowledged that productivity in the system had increased. The fact is that the system is carrying more passengers than ever with fewer frontline workers than ever.

BART management blew up negotiations by insisting that employees sacrifice workplace protections in exchange for economic well-being. This was a poison pill for workers: Choose between your paycheck and your rights.

The rules we’re focused on protect basic rights. Like the eight-hour workday. Like past practice language that protect our workers from punishment and retribution when they report favoritism, sexual harassment and other problems in the workplace.

In the end, we’re willing to let a neutral third-party arbitrator help both sides work through the differences on work rules and reach final agreement on the economic package discussed on the last 28-hour bargaining session.

Despite reports that BART General Manager Grace Crunican and Board Chair Tom Radulovich are trying to meet with our union, I want to confirm that neither has contacted me nor the other top staff of the union to restart talks since bargaining broke up this afternoon.