Yesterday I woke up with my stomach touching my back and empty once again. “I need water,” I told myself. “I can’t die! I can’t tap out! Yet and still, I must continue to fight the fight and have willpower to withstand adversity.” 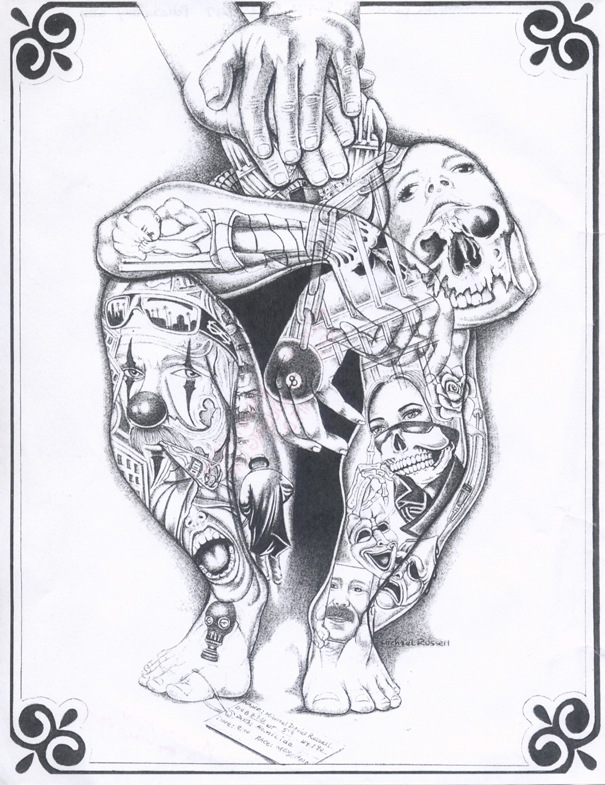 For the past weeks, I told myself this over and over again. The hunger strike for my comrades and fellow people of unjust confinement started July 8, 2013, and I was one of the 30,000 prisoners throughout the state of California prison system to participate. Yet defeated as I write, I must address all the dirty games that are being played and why the numbers drastically dropped from the thousands to the hundreds.

From age 14 to 24, I’d been incarcerated, many of these years spent in solitary confinement in Tehachapi SHU. I was released two months before my 25th birthday. I stayed out two years and 10 months. I was returned back to prison after starting my own publishing company, indie record label and motorcycle club. I am now a father of two beautiful daughters and the author of several published novels.

On July 9, 2012, I re-entered the belly of the beast (CDCR) via Los Angeles sheriffs after being sentenced to 32 months. Charges: possession of a firearm by an ex-con while participating in gang activity. Coincidentally, the pre-release party of my self-help book on gang intervention titled “Gangs: Breaking the Cycle” was shut down by sheriffs and a firearm was found in the establishment. The ex-con got the beef (charge).

Upon re-entering this human warehouse, I weighed 280 pounds. I stand 5 feet 10 inches tall so, yes, I was very much overweight. I would not be truthful if I told you that the scale didn’t hurt me. I had paroled in August 2009 weighing a solid 200.

I landed in the belly of the beast on Delano reception yard. Four months later, I was shipped to Arizona. Due to the overcrowding problems the prison system here is facing, I was sent to Lapalma Correctional Center, a prison privately owned by the $1 billion company, Corrections Corporation of America (CCA).

I arrived at CCA on Nov. 19, 2012. I stayed there long enough to get a Christmas visit from my wife and kids and a family visit on April 4, 2013. I am enrolled into computer classes, which was great for me because I could type and work on manuscripts.

I received word about the peaceful demonstration for our brothers isolated in solitary confinement and decided to be a part of the movement when it occurred. I had been in the SHU and condemned to these harsh conditions.

The hunger strike for my comrades and fellow people of unjust confinement started July 8, 2013, and I was one of the 30,000 prisoners throughout the state of California prison system to participate. Yet defeated as I write, I must address all the dirty games that are being played and why the numbers drastically dropped from the thousands to the hundreds.

The SHU is where I taught myself how to read and write. It is where I became a man of understanding, knowledge and patience, because a lot of people were hanging themselves due to the extremities of that cruel environment. I mean, imagine living years and decades in a box – better yet, a bathroom – where it’s only you.

Imagine having no one to talk to, no one to see your pain, no one to hear your cries. Imagine living in a cold cement tomb. Imagine waking up to spoiled sour milk, half boiled eggs, hard grits and stale bread. Imagine this was all you had to eat. Imagine the spiritually wounded who just need guidance, love and care being subjected to this “degrading treatment” that violates international law. I mean, what if this was your son, brother, father, cousin, friend, lover?

I decided to spread the word to so-called comrades but, as we all know, there’s no honor amongst thieves. The house-cats and rats somehow got me out of Lapalma fast.

A few days after I spoke to a small collective of individuals, I was summoned to the warden’s office. In attendance were the warden, psych and three watchdogs. The warden asked, “Mr. Wroten, are you eating?” My response: “Yes.” The psych chimed in: “Do you feel suicidal?” My simple reply was “no.” A few days later I was called to transpack my property.

On May 12, 2013, I was transferred back to California to Wasco Reception Center. How did I get sent back to a reception center? I don’t know! But I was supposedly transferred from Lapalma because of mental health concerns.

Under the contract CDCR has with CCA, prisoners who have medical or mental health issues are not allowed. Remember, CCA is a corporation all about selling bed space to state prisons. Prisoners with any health concerns are liabilities that CCA does not want.

I was placed back on a reception yard and stripped of all my belongings because reception inmates are not allowed nothing. It was like being placed in Ad-Seg (Administration Segregation). I could not use the phone. My visits went from contact to behind the glass for only one hour. My wife, family, readers and lawyers called but all got the same BS. “Mr. Wroten is not being punished. He just needs to be reclassified back into our California system.”

Imagine having no one to talk to, no one to see your pain, no one to hear your cries. Imagine living in a cold cement tomb. Imagine waking up to spoiled sour milk, half boiled eggs, hard grits and stale bread. Imagine this was all you had to eat.

During the wait for classification, the hunger strike took off. Unlike the dudes at Lapalma, prisoners at Wasco Reception Center knew what was up. The first day, July 8, 2013, everyone in my block participated, even prisoners with health issues. To us it was for a greater cause.

However, CDCR had a strategy employed. That morning they came around with a list writing names of all the participants. They cancelled yard, dayroom and all movement. No showers. Nothing!

After a couple of days, more than 90 percent of the block was back eating. Guards locked doors of the couple of cells still participating so other prisoners could not pass anything to us. Truth is, each day I thought I was going to die! I stopped exercising and drank plenty of water. Luckily for me I had stored fat that my body was eating at. This was not the case for my cellmate. He tapped out and the guards moved him out of my cell.

Ten days into the hunger strike I weighed in at 218. I was down 62 pounds. Most of the weight loss came from working out, but a large chunk came from the hunger strike. That weekend my wife came to visit me and did not like my rapid weight loss. This was when I realized being incarcerated and hunger striking, I had left the defense, health and leadership of my family in question.

My wife began to go into a state of panic, not knowing the true essence of my drive and push for the hunger strike. To her and from what prison officials led her to believe, hunger strikers were just rebelling against the system. I could only explain the situation through pen and paper, but most letters weren’t making it home.

My wife and supporters called daily asking why I still had not been placed back in general population (mainline). The excuse they were given was that I was now being watched for health concerns regarding my extreme weight loss and hunger strike.

My wife and lawyers pleaded with me to just do the rest of my time and come home. My wife cried rivers at that visit expressing to me everything prison officials told her.

To sum everything up, a dirty game had been played and she was led to believe all hunger strikers were combative prisoners whose only goal is to disrupt the order of operations in prison. Yet the truth is these peaceful strikers only want to be treated like humans and not caged animals.

Not truly understanding what was going on – and one hour behind the glass wasn’t enough time to explain – my wife was on the verge of a nervous breakdown. I had to do what was right for my family. On the walk back to my cell, I told the guard escorting me to take me off the hunger strike list.

That night I got my dinner tray, looked at it – and flushed it down the toilet. I would be lying if I tell you I was not hungry, but the guilt that grew over me made it hard to swallow. I mean, I felt like I had let so many people down. However, I told myself the fight isn’t over!

A dirty game had been played and she was led to believe all hunger strikers were combative prisoners whose only goal is to disrupt the order of operations in prison. Yet the truth is these peaceful strikers only want to be treated like humans and not caged animals.

Today is Sept. 15, 2013. I was moved from the reception yard to Wasco State Prison III. I have been on orientation for 20 days when it’s usually only a 10-14 day process. My wife and I have been made whole from this experience because now she understands the degrading treatment being displayed by CDCR. Through it all, a war is won by the many battles. I applaud everyone who’s standing up. Your solidarity is educational to all.

Remember, knowledge is power! The more people know, the more mountains we could move. History has been made and blind eyes are beginning to see.

I am not proud to say I tapped out, but I am proud to say the fight is not over. I am due to be released within the next nine months. I have new books coming out, a motorcycle magazine in the making, a T-shirt line brewing and a family who now understands the injustices of the system. The fight is not over! In our brokenness we are made whole!

Terry L. Wroten is the award-winning author of “To Live & Die in L.A.,” “Natural Born Killers” and “Girl, I Had Enough.” He is also the founder and publisher of No Brakes Publishing and Enterprises. He can be reached at Facebook.com./Author Terry Wroten or Twitter.com@TerryL.Worten or by email at AuthorW@yahoo.com. Send our brother some love and light: Terry Wroten, V-00108, A4-125, P.O. Box 4400, Wasco, CA 93280.