As a founding member of the Black Panther Party and also of PACH, the Police Accountability Clinic and Helpline of Sonoma County, I am all too familiar with police abuse. PACH, an all-volunteer organization, was formed to take reports of police misconduct after community meetings which occurred because of a series of killings in 2007.

I am making this statement on behalf of myself and PACH and in response and protest to the killing of Andy Lopez, 13 years of age, by law enforcement.

One of the reasons that the Black Panther Party was formed in 1966, and why they fought so hard many years ago, was to have community control of the police – to make the police accountable to the community. In the present atmosphere that still exists of racial profiling and police abuse, the politicians and law enforcement agencies are accountable to no one.

Now, 47 years later, here I am, waking up to the news that on Oct. 22, the very day we recognize as the National Day of Protest Against Police Brutality, this 13-year-old child has been shot down and killed by Sonoma County sheriff’s deputies.

On Oct. 22, the very day we recognize as the National Day of Protest Against Police Brutality, this 13-year-old child has been shot down and killed by Sonoma County sheriff’s deputies.

Clearly, police misconduct remains an on-going issue in our community as the civil and human rights of people in our communities are ignored and violated. We all need to protest the police abuse, racial profiling and the killings by law enforcement that continue to occur in our community.

Law enforcement, in this county, is a system against the people. The treatment of people at the hands of law enforcement remains an ongoing issue and, instead of improving, it has clearly worsened. The fact that this child has been gunned down is just one example of an entire unjust system.

Details of these deaths in the past and present are always “not for public record.” The so-called details take weeks to be obtained. We, as community members, demand an accounting of this shooting. We want to know why this child is dead.

In order to protest the police abuse and racial profiling that continues to thrive in our community, we need to take action in various ways.

One of these ways is that we need to cease supporting, as taxpayers, the funding of laws, law enforcement agencies and criminal penalties that do not work and violate our civil, constitutional and human rights.

Some of you may remember, back in May of 2000, the U.S. Commission on Civil Rights, after investigating charges of police misconduct in Sonoma County, recommended that there should be an office formed, independent of the District Attorney’s, to both investigate and prosecute cases of police abuse. It never happened. Why? Was it due to a lack of community political will? 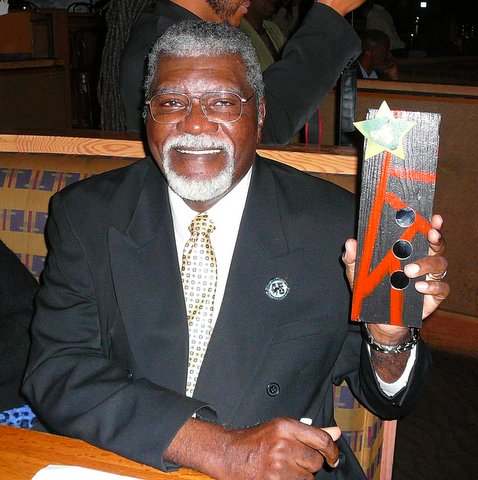 Below are three statements of solidarity with the family of Andy Lopez and the movement for justice.

Statement by Adrienne DeSantis, mother of Richard DeSantis, who was killed by Santa Rosa police in 2007:

“My heart goes out to the family and friends of Andy Lopez. The finality of Andy’s passing from this life, like that of my own son, brings another terrible wave of urgency that we keep our fingers on the pulse of what is happening around us and that we express our love often, before it is too late.

“Regarding the many, many unnecessary deaths by law enforcement, given that the policies in place bring cruel results, why do we let them continue? There’s something backward and very inhumane about shooting first, then handcuffing the dying or already dead person, and then going through the motions of administering first aid.

“All lives have worth, so we must insist on policies that attempt to save all lives. To accomplish that, law enforcement officers must act under the assumption that people are not robots but are thinking, feeling individuals. 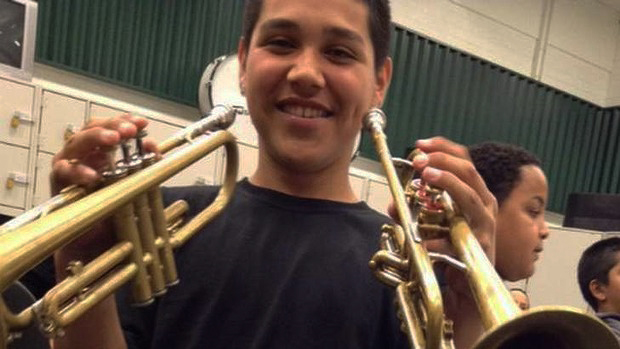 “When weapons are aimed at people by police and orders are shouted, we can expect that fear, confusion and a desire for self-preservation will be one natural reaction. A delayed response is another possibility, while the person is processing what is happening. It is not reasonable to insist under those conditions that commands must be obeyed or the person annihilated.

“How about talking to the person in question in a non-threatening manner? How about asking relevant questions? In many instances, reaching out as an ally is bound to have better results. Vibes are contagious. Tension creates desperation. We need real authorities who are calm in crises and who see the preciousness of all lives.

“The old refrains of, ‘I thought he had a gun’ or ‘It was a quickly evolving situation’ just don’t wash any more. We pay officers to think on their feet and to be courageous. Responders must take an honest look at their part in how things evolve and comprehend that by taking a threatening posture toward citizens, the officers themselves are escalating the situation.

“I know the difference between a competent response by police and a disastrous one. I have had both. And when it was unexpectedly helpful, I took the time to say so to the responder’s supervisor.

“If police want to be respected and trusted in the community, they must not only be courageous and respect the people they are paid to serve but also be truthful when things go wrong and refuse to align themselves with indefensible patterns of conduct that give the whole profession a bad name. Let’s work together for positive change.” 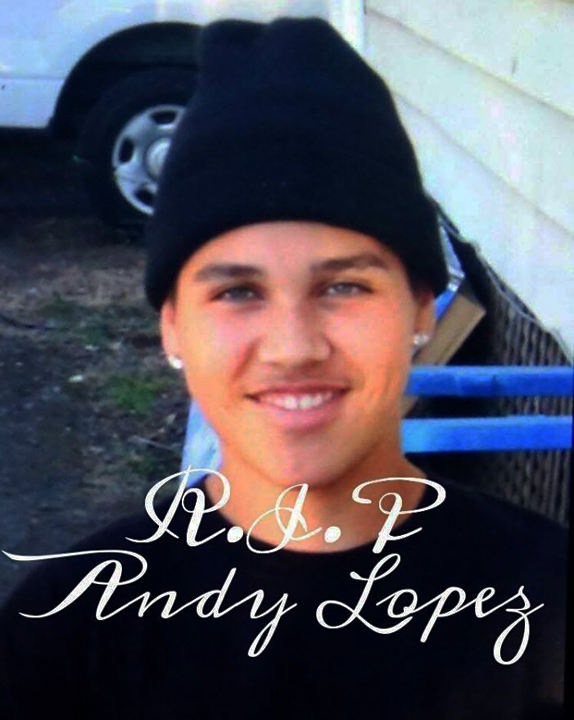 Statement by Marty McReynolds, chair of the Sonoma County Chapter of the ACLU, on behalf of the chapter’s board of directors:

“The fatal shooting of 13-year-old Andy Lopez by a Sonoma County sheriff’s deputy in Southwest Santa Rosa on Tuesday is a tragedy that underlines the need for an independent civilian review board with subpoena powers to investigate police conduct and report to the public. This was strongly recommended by the U.S. Civil Rights Commission in 2000 following its investigation of fatal incidents involving police in Sonoma County. Only such an independent investigation can supply the facts needed for corrective recommendations and give the public confidence in the actions of the agents pledged to protect our community.”

Statement by Megan Gordon, member of Stop Mass Incarceration, who was protesting police abuse with the October 22nd Coalition at Santa Rosa City Hall before Andy Lopez was murdered by law enforcement on the National Day of Protest to Stop Police Brutality, Repression and the Criminalization of a Generation:

“We are heartbroken at the shooting death of Andy Lopez. This needs to be the last act of needless police violence in our county. The fact that it occurred on Oct. 22, the National Day of Protest Against Police Brutality, highlights the truth that our youth are viewed as criminals by law enforcement.”

Only two years ago, in August 2011 at the South Park Day and Night Festival in Martin Luther King Jr. Park, Santa Rosa law enforcement – the police SWAT team in this case, backed by the Mayor’s Gang Prevention Task Force – encouraged children to handle guns. A public outcry followed, and Elbert “Big Man” Howard wrote this letter to the editor of the Santa Rosa Press Democrat, who did not publish it: 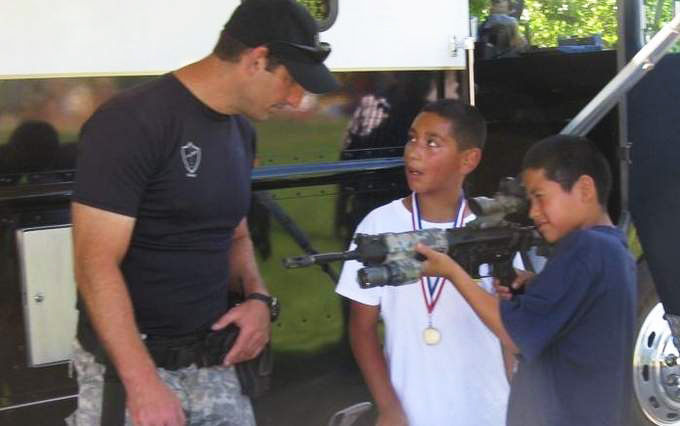 “It is interesting to read letters praising law officers whose latest actions ‘to reach the community’ included a demonstration of force and weaponry for the children whose rights they violate daily.

“Law officers and ICE agents routinely descend on these community members, racially profiling them, harassing and detaining them. They impound their vehicles, bust into their homes and arrest them, for little or no reason. Innocent community members are shot and killed with this same type of weaponry.

“Yet here they are, proudly displaying and allowing children to handle their weapons. Do you think the parents of these children were asked for permission first?

“We cannot comprehend what the intent of all this was, but we do know that justice does not come from the barrel of a gun, and we believe many of these same children already know this fact. Demonstrating how much killing power is available to impressionable children is not protecting or serving the community, but is just a further reminder of the power and terror available for some to exert control over others and how easy it is for those armed in such a manner to take lives if and when they so choose.” 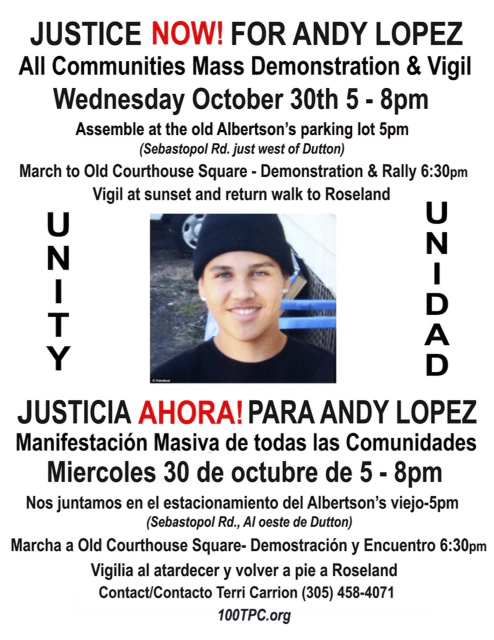