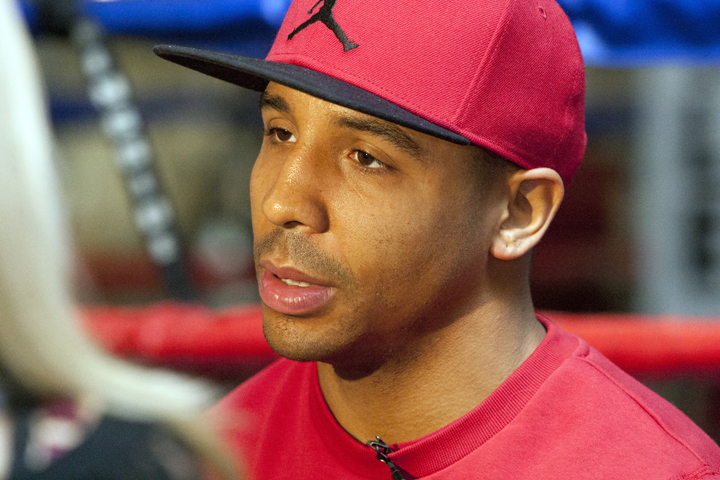 And The Boxing Voice should have thought several times before they printed such crap. But perhaps the ingestion of several tons of eat-crow will be good for them and all who think like them.

The wonder is that they haven’t choked yet, given the Son of God’s spotless reputation.

A reputation, as the world knows, that was built – and has been building ever stronger – since the age of 12. Twelve, lest any forget, is the last time that Andre “Son of God” Ward lost a boxing match.

“La Bomba” cannot say the same. More’s the pity for him, since what he is spending all of his pre-fight time uttering is hardly news worthy, and falls more into the realm of publicity stunt hype.

Firstly, Edwin Rodriguez is in fact the challenger. It wasn’t until very recently, all things considered, that he decided to openly challenge the pound for pound, best of the best super middleweight Bay Area hero, Andre Ward. Did we hear anything from Mr. Rodriguez prior to Mr. Ward’s recent shoulder injury? De nada. Not a peep.

Secondly, the big hubbub about money: Was Mr. Rodriguez going to get “paid what he is worth”? Well, we don’t know. Exactly what is he worth? Will his mouth outrun his feet when he finally steps into the ring? He has been quoted, as late as Oct. 26, 2013, as saying that he is “getting prepared to the fullest.” Getting prepared? Fight night is Nov. 16, 2013, and Mr. Rodriguez is getting prepared?

Getting prepared for what? Running like a rabbit, maybe? Time will tell – significantly.

Thirdly there is the media scam-publicity stunt-hype loaded alleged drug testing controversy. Brought on by Mr. Rodriguez’ shouting loudly that additional drug testing by VADA is necessary for this fight, labeled “The Return” for Andre Ward. The Ward camp’s quiet response was to inquire why this wasn’t made a part of the initial – and lengthy – contract negotiations?

For those who do not know, according to their website, the Voluntary Anti-Doping Association is an independent organization founded to offer and promote effective anti-doping programs in boxing and mixed martial arts. According to its mission statement:

“Through voluntary participation, VADA aims to help protect the health and safety of athletes who are willing to demonstrate their commitment to clean sport.

“VADA will provide confidential counseling and referral assistance to athletes at risk for performance enhancing drug and harmful supplement use.

“VADA aspires to educate participants, commissions and the public about the risks of using performance enhancing drugs as well as the benefits of utilizing effective nutrition and training practices.”

Bully for them. One wonders if Mr. Rodriguez has had to avail himself of the “confidential counseling and referral assistance” offered by VADA. That isn’t the point of this reporter’s curiosity, however.

The point is that on the under, it seems that Mr. Rodriguez has introduced a publicity stunt into the mix by choosing the Saturday afternoon Manhattan Beach press conference held in September to announce his intention to sign up for VADA testing for the upcoming fight, allegedly “so that when I do beat Andre Ward, everyone knows I’m clean” and to condescendingly announce that the tests could be had free of cost to both fighters.

Well, hot damn, Edwin! With millions of dollars on the table, the burning question is why would anyone presume that either fighter isn’t clean? Mr. Ward’s reputation is historically impeccable. Is yours, Mr. Rodriguez?

The negotiations for this fight were lengthy in the extreme, centering, not surprisingly, on money. If there was a serious doping issue during contract negotiations, certainly the involvement of the U.S. Anti-Doping Agency (USADA) or the Voluntary Anti-Doping Association would have been deemed a necessary condition for contract settlement.

So even though Mr. Ward was mildly surprised, he is not unduly concerned with Rodriguez’ antics. Instead, he’s offered a typically brief, concise analysis as to why the question came up at all and additionally why it came up in such a public manner. His expressed thought is that it is a publicity stunt and an attempt to put him on the spot. His advice to media and fans, repeated (again) at his recent press conference at Oakland’s King’s Boxing Gym, is “Don’t believe the hype.”

This response makes sense. Andre “SOG” Ward’s reputation is so clean that most mainstream idiot media pundits routinely flap their lips about Mr. Ward not being an “exciting” enough fighter. They flock like vultures to fighters who trash talk themselves into the ring and have to be carried out feet first after they lose. Or conversely, they have a string of victories that don’t matter.

Andre “SOG” Ward’s reputation is so clean that most mainstream idiot media pundits routinely flap their lips about Mr. Ward not being an “exciting” enough fighter. They flock like vultures to fighters who trash talk themselves into the ring and have to be carried out feet first after they lose.

And “the press,” being as reactionary as it tends to be as a body, prefers blood and guts and gore and veins in their teeth, rather than the kind of skilled boxing that heralds the sport as the “sweet science” that it truly is.

Fourth and finally is the very incendiary remark made by Mr. Rodriguez that Mr. Ward is “definitely a dirty fighter.” Get a life, Edwin!

This is such a childish assertion that it portrays Mr. Rodriguez as someone who isn’t really sure that he’s a real boxer. Is this his way of proclaiming to the world that he’s bigger than he is? Is this his idea of “doing his part for the sport” by accusing Mr. Ward of being a dirty fighter?

Who ever heard of sour grapes before the freaking fight? Doesn’t that usually come after a loss, not before? Especially since at the Manhattan Beach press conference, Mr. Rodriguez was quoted as having said: “I’m trying to be in a clean sport. I don’t believe he’s (Andre Ward) dirty at all. I think he’s a great fighter ….”

Seems to this reporter that the upcoming match between Andre “Son of God” Ward and Edwin “La Bomba” Rodriguez could be the remix of Mr. Ward’s 2010 bout with Oklahoma-born Allan “Sweetness” Green during the World Super Six super middleweight boxing competition. Mr. Ward won that bout against Allan Green.

Mr. Green stated that he was the “champion of jive.” He believed that could “out jive” the Son of God and become WBA champ by virtue of his undisputed ability to uselessly run his mouth.

Mr. Green lost so decisively that he was hospitalized after the fight, so he didn’t even make the post-fight press conference. No jive!

Mr. “La Bomba” the Lip may be cruising for the same kind of fall as Allan “Sweetness” Green. If this is the case, someone remember to bring the soap. After the fight, Edwin “La Bomba” Rodriguez is going to need it to wash out his mouth and clean up his act before he’s ready for another fight.

The Ward v. Rodridguez fight will be held on Nov. 16, 2013, at Citizens Bank Arena in Ontario, California.

On the subject of ‘jive’