KPFA Evening News Anchor: A memorial service and funeral were held in New Orleans today (Oct. 12) for famed Angola 3 prisoner Herman Wallace. Wallace died of liver cancer last week, three days after his indictment was overturned and he was released in an ambulance from Louisiana’s Hunt Correctional Center. 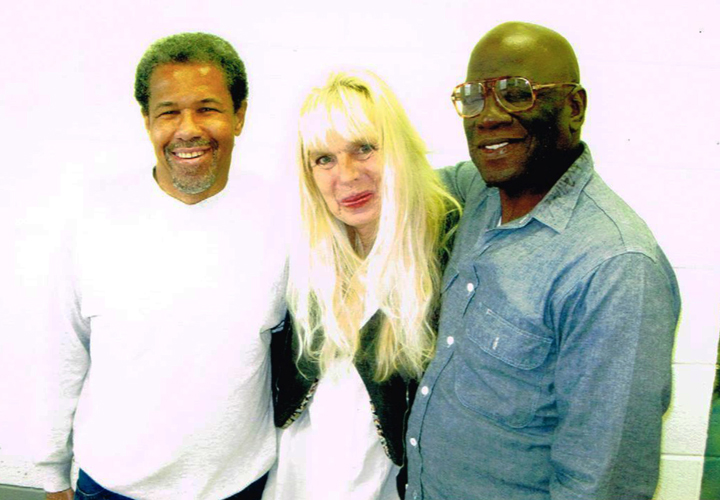 His death also came one day after a Louisiana grand jury re-indicted him for the murder of a prison guard which he always maintained he did not commit, as have Robert King and Albert Woodfox, the other two members of the Angola 3. The three say they were framed and held in solitary confinement for founding a chapter of the Black Panther Party in the Angola State Prison.

KPFA/Ann Garrison: Marina, could you briefly review the major flaws in the evidence against Herman Wallace, Robert King and Albert Woodfox.

Marina Drummer: Well, the major flaw is that there was no evidence. There was absolutely no evidence whatsoever. All there was was conflicting eyewitness reports and a prison administration that was determined to stop Herman and Albert from organizing in the prison.

KPFA: In the film “Herman’s House,” Herman describes the moment in 2008 when he and Albert Woodfox were inexplicably returned to the general prison population.

TV Newscaster: After 36 years in solitary confinement, two of the men known as the Angola 3 have been moved into a dormitory with other inmates at Angola. Herman Wallace and Albert Woodfox were convicted of killing a prison guard but they claim they didn’t do it. They have sued the state claiming cruel and unusual punishment, because they’ve been kept in solitary confinement since the early ‘70s.

Herman Wallace: It happened … ummmm … after 35 years, 11 months and 7 days in a cell, that we were taken from the cell and put on a bus, and we were bused on the concrete all the way out here to Camp B. And, you know, and then they removed all the restraints off of us … off of us … and we walked into the dormitory and I tell you, it was spectacular. I’ve been in dormitory before, but, it has been, you know, 36 years. And, it’s just going to take time for me to drop a great deal of my defense mechanisms, you know, and blend in with some of the social activities that’s going on around me. It’s good, and it’s preparing me for the street.

KPFA: Eight months later, Herman and Albert were returned to solitary confinement, this time to different prisons, far from one another. Was there ever any official explanation besides “General Prohibited Behavior”?

Marina Drummer: No. The thing about the prisons is even the sentence that they had didn’t say anything about solitary confinement. They were sentenced to life in prison and yet they spent that in solitary.

The kinds of decisions that are made about moving prisoners or where they’re kept are made entirely internally. These are not court ordered decisions. They’re made by the correctional department, and frequently at the whim of a warden or a guard.

And in Herman and Albert’s case, and King, when he was there, they were reviewed every few months as to why they were in solitary, and every time they were reviewed, it came back “reason is stated as cause of original sentence,” which … who knows what that means?

There was never ever any kind of explanation for what was going on, neither when they were put in solitary, when they were taken out of solitary, nor when they were moved back into solitary, although I’m sure that the move to separate prisons was something the warden at Angola certainly wished he had thought of 20 or 30 years earlier because it took all of the heat off of him.

KPFA: Do you think the unprecedented media attention that Herman won in the last few months of his life, and now in death, has a good chance of leading to the freedom of Albert Woodfox?

Marina Drummer: We certainly hope so and we’re certainly going to do everything we can to push for that and utilize the critical mass that’s developed. And yet, I cannot stress enough that the state could care less what the U.N. says, what the Congress says, what Amnesty says, what anybody says. They’re determined to fight this to the end, as was shown by the fact that even on his dying day, or two days before he died, they went to the trouble of calling a special grand jury to re-indict him.

KPFA: PBS has made the film “Herman’s House” available online for free until Nov. 2 in honor of Herman Wallace. Other films that tell more of the history of Angola Prison and the Angola 3 include “In the Land of the Free,” “Angola 3: Black Panthers and the Last Slave Plantation” and “Hard Time,” all of which are available online.