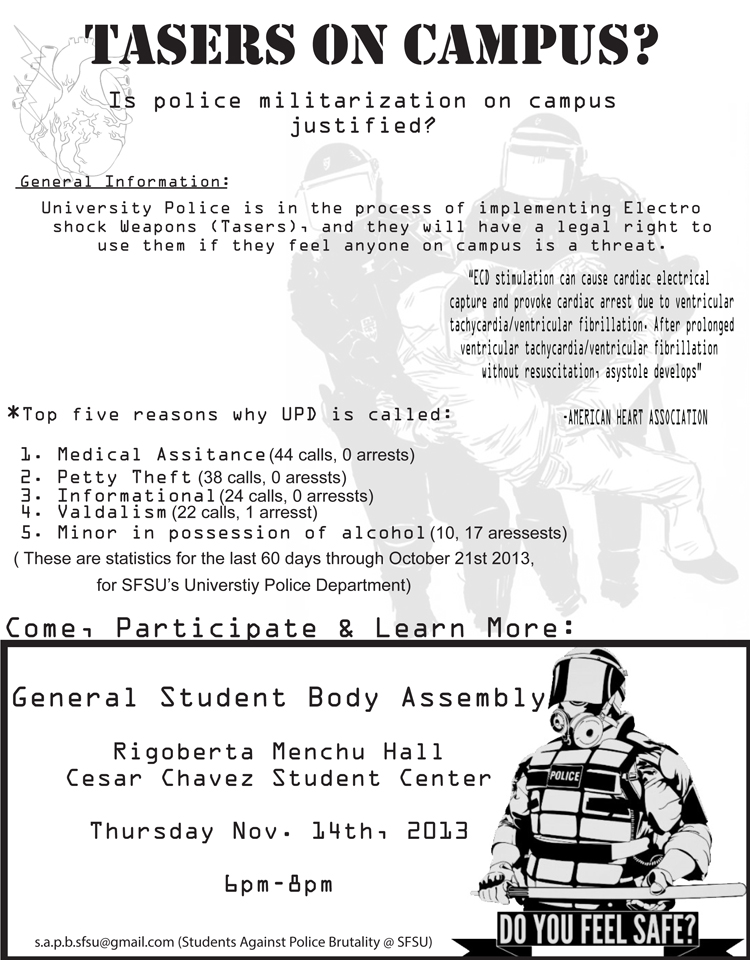 On Thursday, Oct. 24, San Francisco State President Leslie E. Wong and other university officials of met with students in an utterly under-advertised “colloquium on public safety.” The understated yet understood point of the meeting was to present the appearance of a willingness to engage student opinion on the highly controversial proposed adoption of Tasers for deployment by University Police.

“There aren’t any answers that I can promise you today that will last maybe even through tomorrow or even the next decade or to 2025 … but the effort [towards effective public safety] is being challenged daily, if not weekly, if not hourly.”

President Wong continued by introducing more explicit though equally dubious justifications for an increase in the arsenal of UPD. “My understanding is that the actual number of weapon incidents on campus is going up.”

He followed with the first of multiple references to the recent murder of a student – which occurred off campus. “We have been struck by a catastrophe, both in Justin Valdez’s murder, but even in the wounding of some of our students off campus, and all of that is certainly something we worry about as we monitor the campus 24/7, 365.”

“My understanding is that the actual number of weapon incidents on campus is going up,” said President Wong.

The students present did not share this same sense of imminent danger of violent crime. Alejandro Garcia Ochoa, a current student and Taser survivor, stated what was re-iterated in different terms by virtually every student at the forum.

“In terms of campus safety, I don’t understand how introducing another weapon, how that is going to diminish violent crimes on this campus.”

Another student, Donna Olivera, questioned Wong’s assertion of an increase in weapon incidents.

“It feels like there’s a push or an urgency that doesn’t really exist on our campus … In terms of what is actually recorded on your website as of Monday of this week, actually in the last 60 days there’s only been two possessions of weapons and only one arrest for that.

“In 2008 there were only eight recorded weapon possessions, in 2009 there were only two, and in 2010 there were only two. So you’re saying there’s been an increase in these type of weapons being used and weapons in general being carried on our campus but the numbers and figures that are available to us students and the independent public, that are sensible to us, are showing as actually decreasing.”

These figures have been challenged since the meeting by the Jeanne Clery report that updates the figures to four in 2010, five in 2011 and one in 2012. Yet despite spikes in 2010 and 2011 it still shows clearly a low incident rate and a decline in the last five years without the introduction of Tasers.

In 2008 there were only eight recorded weapon possessions, in 2009 there were only two … four in 2010, five in 2011 and one in 2012, clearly a low incident rate and a decline in the last five years without the introduction of Tasers.

Responding to this critique, President Wong resorted to an anti-intellectual and frankly patronizing tact worthy of a bad spaghetti western movie.

“Keep in mind that bad guys and bad women don’t tell you that they’re carrying a weapon.”

This alarmist line was carried by Deputy Chief Parson to the point of absurdity. He described the ease of access for violent criminals due to an open campus, and the glorious resources just waiting to be plundered.

“We have a wonderful library…all the things we have, resources we have here on campus that entice and invite people here to come to campus and victimize our campus community. We’re victims. We are all victims.”

When asked about the use of Tasers, Deputy Chief Parson referred to the weapon as an “incapacitator” and equated their use with that of pepper spray. The fact that according to Truth Not Tasers, an independent research group, at least 830 people have been killed in North America by Tasers, as opposed to pepper spray with 63 dead (Dr. Charles S. Petty, in a report for the U.S. DOJ) by the highest figure this author could find, did not seem to faze the officer in his ridiculous analogy.

“Resources we have here on campus entice and invite people here to come to campus and victimize our campus community. We’re victims. We are all victims,” said Deputy Chief Parson.

“I feel more threatened by the weapons actually than the supposed people coming on to our campus because the weapons are bringing a real trauma to us” said Donna Olivera.

Others pointed out that the resources (money) could be better placed elsewhere.

“Where are you getting the money to supply these Tasers and the hours of training when things are being cut for us that would actually help us?” questioned student, Andrea Chavez.

“As a college student, one of my main concerns is tuition. I feel like it connects because obviously there’s resources that could be going to other things … potentially going to the Tasers,” observed another student.

“There’s resources that could be going to other things … potentially going to the Tasers,” observed a student. “Where are you getting the money to supply these Tasers and the hours of training when things are being cut for us that would actually help us?” asked another.

Students also pointed out the history and possibility of racial discrimination in Taser deployment as well as the need for attention to other matters, such as student alcoholism and underfunded health concerns. This led to several off-topic attempted university face saving discussions about programs offered and gave a chance for administrators such as Joseph Greenwell, dean of students, to wax poetic about their student concern.

“We really want the discussion to be about campus safety overall, including what’s safe at night,” she expounded.

She then proceeded to announce “A Walk in the Dark” for Nov. 5, where administrators would walk the campus looking for dark hiding places that predators might occupy. But the students refused to be sidetracked by this or any other ploy.

The administration also employed the tactic of referring to Tasers as tools, as opposed to weapons, to deflate their possible lethality. This also did not go over well with the students. One student explicitly questioned the rhetorical device of tool as opposed to weapon and what the implications would be for officers who used Tasers in an inappropriate situation. When President Wong tried to dodge the question, the student sharpened it.

The administration also employed the tactic of referring to Tasers as tools, as opposed to weapons, to deflate their possible lethality.

“Does the rhetoric of tools make it more OK to use these weapons?”

President Wong’s agitated response to a call for police accountability should alarm all students at the university. He actually – loosely figuratively – threatened the student.

“I have a pen (which he proceeded to pull from his jacket) and I could probably kill you with it,” retorted the university president.

“Does the rhetoric of tools make it more OK to use these weapons?” asked a student. “I have a pen (which he proceeded to pull from his jacket) and I could probably kill you with it,” retorted the university president.

Ultimately the discussion was quite polar, with the administration trying everything they could to present an appearance of neutrality but obviously advocating the use of Tasers, an objective to which the eloquent and informed 19 students who attended were unanimously opposed.

The low attendance was blamed on bad advertising of such an important meeting and called out by many in attendance. In response, President Wong expressed his willingness to have more meetings to discuss the matter with students and stakeholders prior to implementing any policy.

Hopefully this exercise in campus democracy will occur and the discussion next time will be more inclusive, more sophisticated and less reliant on pen-wielding predators in the dark with voracious eyes turned towards San Francisco State’s admittedly magnificent new library.

Jeremy Miller is program director for the Idriss Stelley Foundation, part of the POOR Magazine family, former member of the San Francisco No-Taser Task Force, and a graduate of San Francisco State University. He can be reached at djasik87.9@gmail.com.

ANNOUNCEMENT: Students Against Police Brutality, an SFSU student activist group, will be hosting a General Assembly for students to discuss the issue of Taser deployment on campus, on Thursday, Nov. 14, 2013, at Malcolm X Plaza, SFSU main campus. The assembly will run from 6 to 8 p.m.