Fifty years ago, on a cold day in Dallas, Nov. 22, 1963, President Kennedy was assassinated. To my mind, what is extraordinary about the Kennedy assassination is that the haters did not win. Instead, crucifixion led to resurrection. As a result, for decades, African-American homes across the nation featured pictures of three people: Jesus Christ, Dr. Martin Luther King and John F. Kennedy. 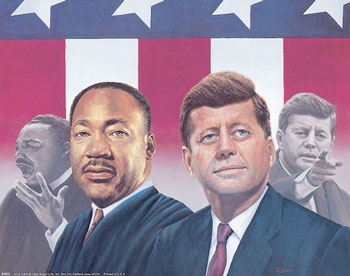 JFK was a cautious, pragmatic and stylish politician. He was a moderate in temperament and politics. His focus, to a large extent, was on the Cold War and America’s leadership in the world. His most imaginative domestic initiative was a commitment to go to the moon, in large part to answer the Soviet success with Sputnik.

Although he came from wealth, Kennedy was still an outsider. He was a Catholic, in those days a stigma for someone seeking national office. He was not a leader on civil rights during his one term in the Senate, voting against a weak civil rights bill in 1957.

But at the 1960 Democratic convention that nominated him for president, he lobbied forcefully for a strong civil rights plank in the platform, in the face of angry opposition from Southern Democrats. The African-American vote swung strongly for Kennedy after his famous phone call to Coretta Scott King during the campaign, when Dr. Martin Luther King Jr. was clapped in jail after a sit-in protest.

When Kennedy became president, segregationist Southern Democrats dominated the committee chairs in both houses of Congress and blocked any movement on civil rights. But the Civil Rights Movement was forcing America to face the immorality of segregation.

Kennedy sent troops to the University of Mississippi when James Meredith’s life was threatened as he integrated the school. After the horrors of Birmingham, when the country saw women and children beaten and gassed by brutal white police, Dr. King wrote his prophetic letter from the Birmingham jail.

On June 11, 1963, Kennedy responded with a major civil rights address.

“We are confronted primarily with a moral issue. It is as old as the Scriptures and as clear as the American Constitution,” he said, calling for a civil rights act to end discrimination in employment and public accommodations. He met with congressional leaders in October to press for legislation, despite the opposition of the Southern barons. 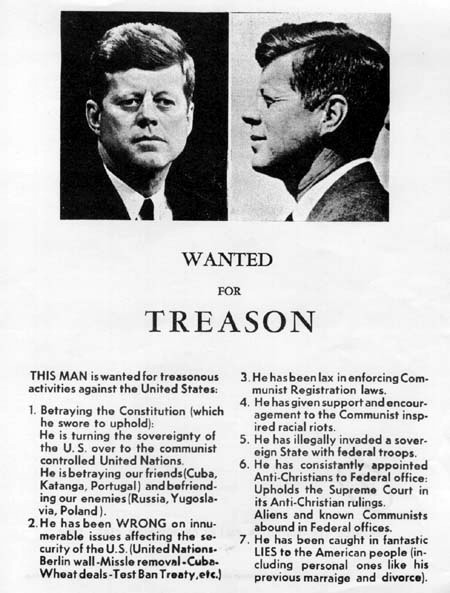 Not surprisingly, the haters loathed Kennedy. When he traveled to Dallas on the fateful day, the Dallas Morning News featured a hateful ad paid for by a group led by Dallas oil executive Nelson Bunker Hunt, accusing Kennedy of being a “pawn of Communists.” The John Birch Society distributed a pamphlet saying JFK was “wanted for treason,” accusing him of giving “support and encouragement to Communist-inspired racial riots.”

But Kennedy’s assassination shot him to immortality. In his first address to a joint session of the Congress five days after the assassination, Lyndon Johnson rallied members to act: “No memorial oration or eulogy could more eloquently honor President Kennedy’s memory than the earliest possible passage of the civil rights bill for which he fought so long.”

As a Southerner and former Senate majority leader, Johnson had the capacity to grasp the moment and drive through the legislation. It passed only after overcoming a Senate filibuster of over 50 days, the first civil rights legislation ever to survive a cloture vote.

In death, Kennedy ascended in popular memory and regard. Now, hilariously, conservatives even vie to claim him as their own. But don’t be misled. The right-wing haters who now accuse Obama of treason and call him a Muslim were indicting Kennedy as a Communist handing the government to the pope 50 years ago.

“No memorial oration or eulogy could more eloquently honor President Kennedy’s memory than the earliest possible passage of the civil rights bill for which he fought so long.”

Republican House Speaker John Boehner, who refuses even to allow a vote on comprehensive immigration reform, is no different from Democratic House Rules Committee Chair Howard Smith, who kept civil rights legislation from the floor 50 years ago. And today as then, only powerful citizen movements that open up space for courageous leaders will overcome that hatred and prejudice.

Bayview resident is making a difference