Last Friday the eyes of the world were on San Francisco, California when thousands of people came together to transform the City by the Bay into Gotham City, home to the Caped Crusader Batman. On this particular day San Francisco was playing host to another hero, 5-year-old leukemia patient Miles Scott, who donned a suit and played Batkid. SFPD Chief Greg Suhr and Mayor Ed Lee pulled out all the stops to help the Make a Wish Foundation grant Scott his wish to enact a number of scenarios, ranging from saving a damsel in distress to stopping a bank robbery. He helped Batman take on his arch nemeses like the Penguin. 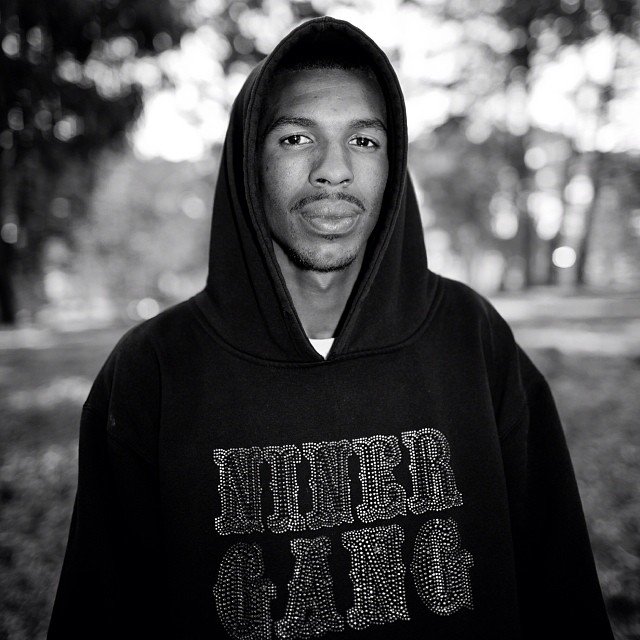 Seemingly everyone in the city got into the act. Traffic was stopped, buses rerouted and over 15,000 people took off from work and went down to City Hall to see Mayor Ed Lee present Miles a key to the city. The day was filled with lots of smiles and lots of tears as everyone wished Miles a speedy recovery. Among those in attendance was 21-year-old D’Paris “DJ” Williams, a well-mannered, popular 20-year-old SF City College student and avid bicyclist.

He left the event elated along with everyone and rode his bike back home, which was several blocks away at Valencia Gardens. As DJ rode up to his door as he has done hundreds of times, he was approached by two undercover officers. They took issue with DJ riding his bike on the sidewalk. Here’s what DJ’s friend wrote about what took place next on the instagram site TakingaStandSF:

“Apparently, the officers said something to DJ about riding his bicycle on the sidewalk as he was pulling up to his home in the complex. It is unclear whether the officers identified themselves or not, but did proceed to get out of their car, grab DJ from behind as he was entering the home and beat him for no apparent reason. A police search uncovered a cupcake and juice that DJ had just purchased from the corner store. Nobody has spoken to DJ since the incident occurred as he was immediately taken to S.F. General Hospital for treatment, and then to the 850 Bryant police station. So far, it appears no charges have been made against DJ either.

“There is building video surveillance footage of DJ’s confrontation w/ police, but it that has yet to be released by housing authority. Furthermore, three residents came to DJ’s aid when they saw officers beating him up, only to find themselves also under attack by officers. By this time, uniformed backup had arrived on the scene. Including DJ, a total of four individuals were beaten and arrested by officers. Video footage of the altercations that occurred after DJ was beaten can be seen here”:

Needless to say what took place has angered not only the residents of Valencia Gardens, which is a tight-knit community, but folks all over the Bay Area who have grown weary of all this brutality by out of control police. From the shooting death of unarmed 13-year-old Andy Lopez last month to unarmed 16-year-old James Rivera being shot 48 times in Stockton to the coverup and shooting death of Alan Blueford in Oakland to 61-year-old disabled Andrea Naharro, shot this past weekend in San Jose, folks all over are on edge. There have been a number of protests calling for charges to be placed on the officers in the Valencia Gardens incident.

In talking with residents, a few concerns have surfaced. The main one is that Valencia Gardens is in the historic Mission District, which has been undergoing massive gentrification. As more white folks have been moving in, many Black and Brown folks, who long made up the majority of folks living in the Mission, have noted they are frequently being profiled and stopped by police.

They are often viewed suspiciously, even though they have lived there for generations. Many feel that they are being made to feel unwelcome in their own neighborhoods and police harassment is part of a larger process to make it so uncomfortable that folks move out.

The other concern is that the police now patrolling the area around Valencia Gardens are young, inexperienced and rookie cops who have little connection or familiarity to the community. It’s been noted that in years past the police knew the folks living in the Gardens and the residents knew the police. Now they have folks who see the VG as a community where they can get some street smarts and cut their teeth using the residents as fodder.

Many feel that they are being made to feel unwelcome in their own neighborhoods and police harassment is part of a larger process to make it so uncomfortable that folks move out.

Since the protests, instead of trying to meet and reassure residents, police have increased patrols and sending undercover officers around as a way to intimidate folks. The people who were beaten have been left traumatized. Some have not returned to their homes. 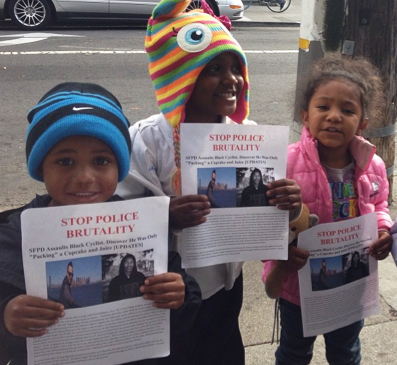 We sat down with Selina Rodriguez, whose brother Orlando was one of the residents shown in the video being pummeled by police. His face was smashed on the ground and was bloodied up pretty bad. The other person we interviewed is Frank Williams, father to DJ Williams and a longtime community activist who works with people coming out of prison to transition back into society. Both have degrees in criminal justice and are keen organizers. Selina has put together several of the protests with more to come and has complained about SFPD officers sitting right outside her house trying to intimidate her.

Frank Williams described his son as someone who is deeply hurt and too shook up to come back to Valencia Gardens. He’s been staying with relatives. He doesn’t understand how and why such brutality was unleashed on him.

Williams during our conversation described what took place as straight up terrorism with officers who had nothing but hate and contempt for the residents they beat up. Below is our interview with both Selina and Frank.

Also check out articles on this at http://missionlocal.org/2013/11/allegations-of-police-brutality-spark-protest/ and http://uptownalmanac.com/2013/11/sfpd-assaults-black-cyclist-discover-he-was-only-packing-cupcake-and-juice.

Davey D can be reached at mrdaveyd@aol.com. Visit his website, daveyd.com, and his blog, Davey D’s Hip Hop Corner, where this story first appeared, and listen to him on Hard Knock Radio.