HELLO! Good to be back on the scene talking about MY FOLKS! For decades, traveled San Francisco’s famed Fillmore and Divisadero Streets, writing about street action and Black life! So, here I am checking out the happenings on THIRD STREET, the heart and soul of the Bayview Hunters Point community – the LAST BASTION for African Americans in this town! 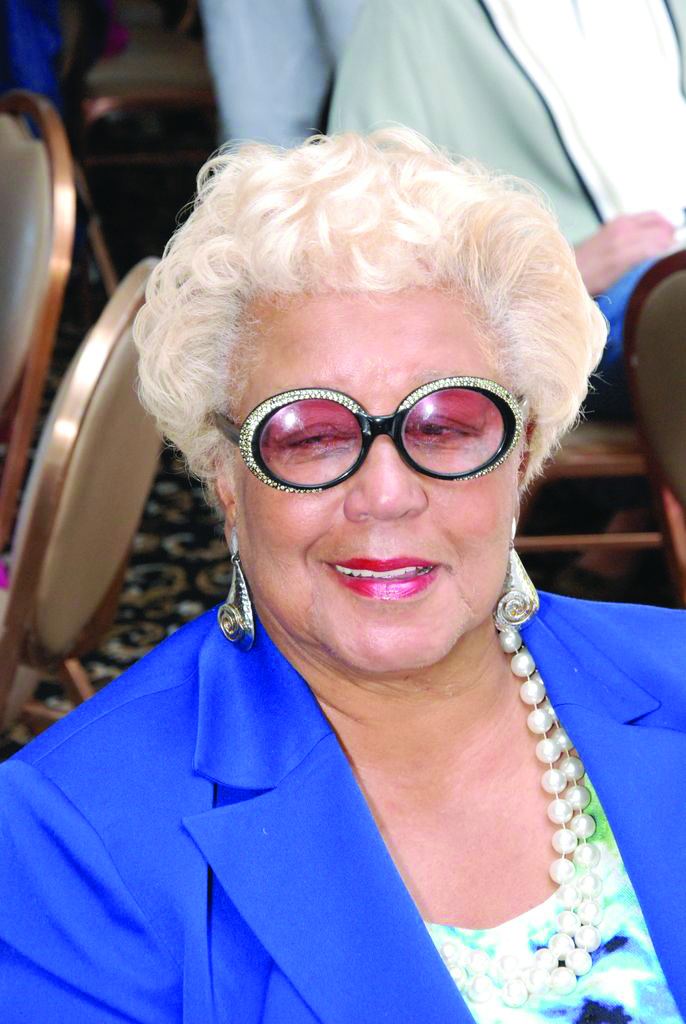 Started penning the popular column “I HEARD THAT,” published in the Sun Reporter newspaper from 1976 to 2007, now online at Beyondchron.org. Covered Third Street, mainly establishments like Sam Jordan’s – now designated a landmark. Loved Sam and Ruth Jordan, both deceased, but the Jordan family continue their legacy. Oldtimers still frequent the spot, mixed with the younger adult crowd whose parents did the same.

Club Long Island, Third and McKinnon, owned by Emmitt and Dorothy Kennedy, both deceased, was a showplace where famous stars performed – the likes of Blues great, Bobby “Blue” Bland, Ike and Tina Turner. Currently the club is owned by businessman CLARENCE WILLIAMS, who never quite got off the ground to open the nightclub; tragically, part of the club caught fire earlier this year – FUTURE in doubt!

After 24 years, The Monte Carlo Bar and Restaurant closed the middle of July – devastated customers were heartbroken! THERESA DEROUEN-LYNCH and hubby GARY LYNCH (of five years) yearned to move on with their life, sold the club. THE JAZZ ROOM, owned by BERNADETTE SMITH, still hanging on – enhanced with Monte Carlo customers – the likes of DON JUAN and his posse!

NEVER imagined, when moving to the Third Street corridor two years ago, would be asked to write a column in this publication. The San Francisco Bay View newspaper, located in the heart of Third Street, near Mendell Plaza, covers Bayview District and beyond since the early ‘90s, a time when Third Street was bustling with Black-owned businesses, entertainment venues. TIMES HAVE CHANGED!

During these economic hard times – government shutdown last month, recession, high unemployment in Bayview with a lack of jobs for Black folks and other people of color – Third Street is STILL predominately Black. HOLD ON! A change is coming – planned revitalization of the area. Black-owned businesses on Third are struggling to keep a foothold, while those with BIG bucks are moving in! HOLD ON!

One of the SWEETEST businesses on Third is YVONNE’S Sweets Creation doing a brisk business selling mouthwatering desserts and Praelines, a Southern confection made with butter, sugar, pecans and milk. CONGRATULATIONS, LADY! Oct. 26, Yvonne celebrated the store’s seventh anniversary, located next door to “Let’s Eat” Barbecue Place – both within the same block as Frisco Fried and JJ’s.

Stopped in on a warm Thursday afternoon, as I will occasionally do, to purchase something sweet and chat. SO PROUD of this young lady who grew up in the Ingleside District of San Francisco – and once had a crush on my son! INSPIRED by her grandmother, the late VERMELL HINES, under her cooking apprenticeship, found her niche!

And balances her life as a single mom, raising her daughter, the joy of her life, 10-year-old SHAVONNE (father deceased) who has taken interest in the business since a young child, shares her vision; someday will carry on.

Two happy gents – ANTHONY ANDERSON and his “mentor,” MICHAEL RED, assistant case manager with Senior Ex-Offenders Program, offices at Bayview Hunters Point Multi-Purpose Senior Center (founded by Dr. George Davis), eager to place their order. Asked, “What’s so sweet about Yvonne’s desserts?” Red enthusiastically responded, “HOME COOKING – she puts her FINGER in it. I like everything she bakes.” I HEARD THAT! 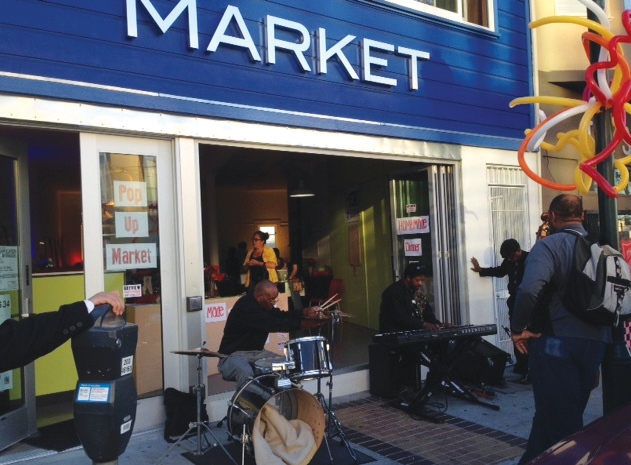 I told friends, when I moved to the Bayview – I’M AT THE RIGHT PLACE at the RIGHT TIME – area slowing going through a RENAISSANCE! A lover of SWINGING music – Jazz, Blues, R&B – found a good spot at Dr. George Davis’ Senior Center and Monday Night Jazz, produced by SUZY TYNER, program director, who has presented some foot stompin’ feel-good smooth music for the past four years, during summer and fall. Sorry – October was the last line up! She’s hiring stellar musicians like RICARDO SCALES, JAYE AND FRIENDS, baaaad blowin’ saxman ANTHONY DILLARD and friends – OFF THE HOOK!

There’s a lot of action on 3-STREET! COME STROLL with me on a Thursday night. 3RD ON THIRD ended in October, but was a wonderful PR event, started during the summer, brought the community together, supported by the San Francisco Art Commission, Bayview Merchants Association and District Supervisor MALIA COHEN who was able to obtain grant moneys that will cover next year as well. October was the last event until, perhaps, January.

3rd on Third brings communities together to enjoy specialty foods, entertainment, cable car rides up and down several blocks of the street, bells ringing, folks hopping on and off. One stop, at SAM JORDAN’S, legendary customer MR. CHARLIE GENERETTE celebrated his 80-plus birthday that evening, delighted to get on board!

Son of Sam, CHEF ALLEN JORDAN, House of Jordan’s Ribs restaurant, located in the back of the club, served FREE turkey dinners that evening for all who came, joined regular customers, some played dominoes on sidewalk tables. New resident to the area, ANIETIE and his pals, enjoyed the evening – DIVERSITY!

BETCHA’ didn’t know about The MARKET PLACE ON THIRD – a community pop-up, next to AUNTIE APRIL’S Chicken and Waffles Restaurant! Third Thursday night from 5-7:30, walked into a large room bursting with activity, filled with vendors, all from the Bayview neighborhood – local artisan food producers and artists together under one roof.

EARL of Earl’s Bread, who sells a variety of breads and peanut brittle, explained: “We’re offering healthy, affordable food to the community, a $5 menu. One can eat really well – food from vendors who sell Jambalaya, chicken salad, vegetarian soup, Ethiopian, PIA SOUL, pulled pork and short ribs. Market, idea of Earl and consultant and community activist ANDREA BAKER, opened in September, will run through this month.

One can see within certain blocks, it’s not all rosy on 3-Street, with boarded up storefronts, loiterers hanging around liquor stores and the Plaza – the PEOPLES PLAZA. BUT the goal is to make 3-Street a destination point! AND A PRESENCE FOR BLACK FOLKS!

Thrilled to pause, pat my feet, snap my fingers, movin’ to the sounds of musicians CURTIS MAESTRO on keyboards and his unit, performing on the sidewalk in front of the Market. What a groove – a JIMMY SMITH feeling – funky Jazz on 3-Street. MADE MY NIGHT! RONNIE WARDELL stood next to me, shared he’s studying Blues and Jazz class at City College, digging the action, taking notes!

Moved over to AUNTIE APRIL’s, where INFINITY Performing Ensemble entertained diners (got me some OXTAILS), performed splendid theater reading, led by actress and playwright MARY BOOKER, founder of Infinity. BRAVO! Rev. CALVIN JONES in the gathering.

PASSING – Longtime Bayview resident Mr. JIMMYE V. HAMPTON passed Oct. 3, 2013. Mr. Hampton and his wife, Gloria Wardell Hampton, established the Joshua Marie Cameron Academy in 1993 to assist youth in crisis, worked together until 2012 where they closed the school and retired. Both members of Providence Baptist Church, where homegoing services were held. Repast at The Jazz Room, located on Third.

Mr. Hampton served in the USAF, stationed at Hamilton Air Force Base, Novato. Honorably discharged in 1960. My sincere condolences to Mrs. Hampton and family in their loss. Met Jimmye at Hamilton AFB, observed his success in life. 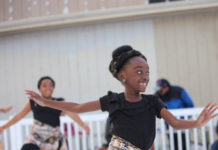