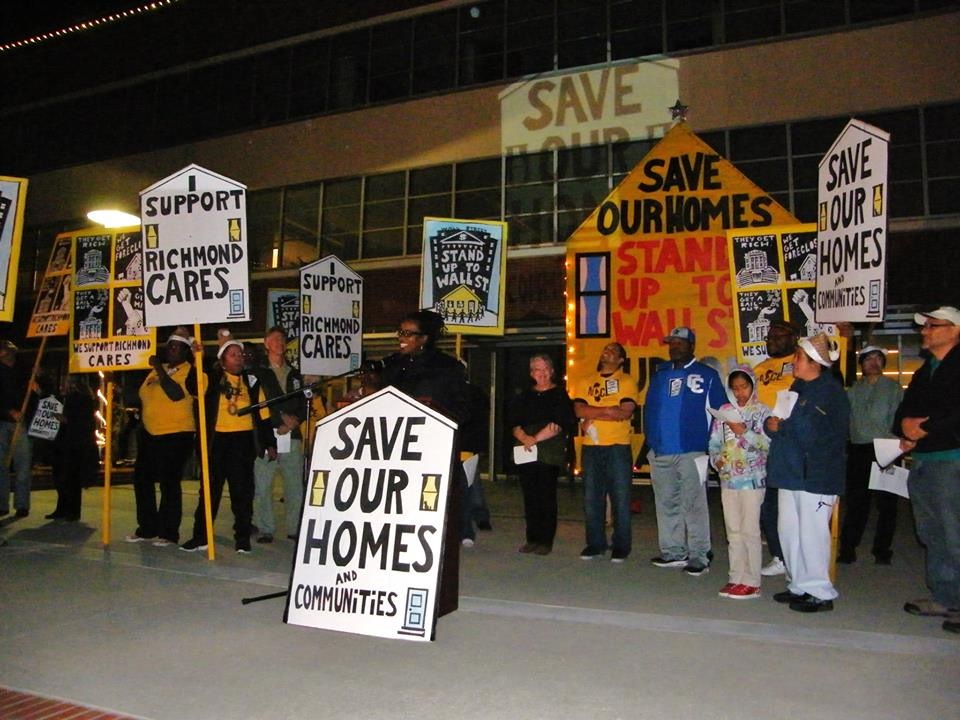 The Richmond community has decided not to rely on the banks or federal government to address this national problem. With a grassroots campaign lead by ACCE (Alliance of Californians for Community Empowerment), the community is demanding action. The banks and realtors have seen this as a threat to their power which could spread throughout the country. The lines have been drawn and the battle is on.

Actually it is more like “reverse” eminent domain. For years eminent domain has been used by developers to force people out of their houses. Richmond is proposing to use eminent domain to keep people in their homes.

At the Dec. 17 City Council meeting, a resolution passed creating guidelines to assure that the plan would help those people hurt most by the foreclosure crisis by making the hardest hit areas the priority and by putting a cap on the mortgage size. Under these guidelines most of the houses helped will be in areas where families make less than $55,000 annual income.

For years eminent domain has been used by developers to force people out of their houses. Richmond is proposing to use eminent domain to keep people in their homes.

This program is really a win-win solution for communities. It allows people to stay in their homes. It stabilizes the community. It even stabilizes “toxic mortgages” for investors. Yet big money is flowing into Richmond to fight this community supported program.

There are many good real estate agencies like The Munir Group who provide a service matching people with homes that are available. But there are many other realtors who have no problem disrupting the stability of the community. They make their profit when there are sales. For them, foreclosures are forced sales. The realtor associations who have mounted a campaign of lies and fear against Richmond are giving all realtors a bad name.

Another interested party opposing Richmond CARES is land speculators. These individuals are nothing more than profiteers who could be compared to carpetbaggers and who make financial gains from blighted communities.

They buy (now cheap) blighted, stripped homes and then cash in on the gentrification which is spreading as middle class and working class people are being driven out of San Francisco and into Richmond and other parts of the East Bay. Finally, there are the rightwing ideologues who oppose any community-led action to save communities for the residents.

Fortunately, as the word gets out, interest in the program is spreading. The more cities that are willing to join the fight, the stronger we can be against the banks and realtors. A majority of San Francisco Supervisors have written a letter stating that they are looking into the plan. Other Bay Area cities are expressing interest.

Richmond is hoping to go forward in coalition with other cities because we understand that we are stronger with others. Practically speaking, a coalition will allow us to share legal and management costs.

The community organization ACCE that is leading the campaign for the program in Richmond is beginning similar campaigns in other cities in California. In San Francisco (see http://www.homedefendersleague.org) I encourage all homeowners and renters alike to be well informed by investigating and critically analyzing the situation in order to make the best decisions going forward.

Jovanka Beckles is a Richmond city councilmember who also works full time as a mental health specialist for Contra Costa County. She was born in Panama City, where she grew up in a bilingual, multicultural household. Her parents moved to the United States in1972, and she has lived in Richmond for the last 13 years. She can be reached at Jovankabeckles@gmail.com.

Richmond battles banksters to save homeowners from foreclosure

The City of Richmond, California, voted to continue its groundbreaking effort to save resident homeowners from foreclosure on Dec. 17, 2013. The Richmond City Council voted 4 to 2 in favor of moving forward with its plan to use its right of eminent domain to protect homeowners and to “prioritize those neighborhoods that have been particularly hard hit by the housing crisis.”

The San Francisco Chronicle reported that Richmond could invoke eminent domain for underwater mortgages by uniting with another city in a Joint Powers Authority – even without getting a super-majority of the City Council to approve the controversial idea. More than half of homeowner mortgages in Richmond are said to be underwater.

Opponents of the plan seek to block its implementation by relying on the city’s charter, which requires a super-majority to invoke eminent domain. The council is currently divided, with four members supporting Mayor Gayle McLaughlin’s plan and three opposing, which is short of a super-majority.

Banks and realtors oppose the concept, saying it is unconstitutional and would drive up lending costs in the city. They’ve run a well-financed campaign attacking the plan and are poised to launch a fierce court battle against it, according to the Chronicle.

The Contra Costa Times reported that the resolution adopted directs city staff to step up efforts to partner with other cities in a possible Joint Powers Authority.

“To keep my support, we need to ensure we have partner” cities, Councilman Jael Myrick said. “Other cities cheerleading Richmond is fine, but let’s be honest here. Richmond needs other cities to reduce the risk,” he told the Contra Costa Times.

Prior to the Dec. 17 council meeting, supporters of Richmond’s initiative rallied in from of Richmond City Hall. Later, at the City Council meeting, a majority of approximately 40 speakers spoke in favor of moving forward.