With books like “The Skin I’m In” by Sharon Flake, it is obvious that dark-skinned African American women have endured a myriad of struggles and pain based on their complexion.

What about the other side of the racial hue? 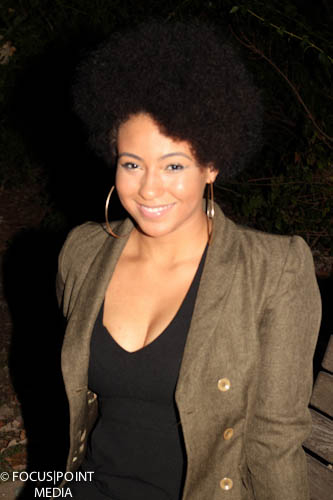 Trapped within the framework of those stereotypes, Rikki Frohmader, broadcast journalism major from Southern California, sheds some light on what life is really like as a light-skinned woman.

A product of a bi-racial relationship – German father, Black mother – Rikki expressed what it means to be a light-skinned woman in America: “To be honest, I am very aware that I am light-skinned, I guess. [But] I really wouldn’t consider myself light-skinned because I truly do see myself as a Black woman.”

In her opinion, she is “no different or any better than a ‘dark-skinned’ Black woman. But maybe with some ignorant, insecure, brainwashed Black people I have an advantage.”

Rikki believes that her pseudo-advantage over her dark-skinned counterparts stems from an ideology placed in the Black community by white society, an ideology that Rikki says “is just another tool to fortify the white man’s soul as he watches Black people ignorantly divide themselves.”

“I think I am at an advantage with [those] people who are brainwashed to think that anything closer to white is better and anything too Black is not. Now physically maybe I am light-skinned, but on the inside I do not reflect that stereotypical mindset at all,” states Rikki.

According to psychologist Dr. Lisa M. Brown: “If a Black woman lacks self-esteem, she is susceptible to allowing negative, external messages to define her worth based on any false criteria. The key is to help women of color truly know that feeling good about oneself is based on being spiritually, emotionally and even physically healthy.”

Rikki, voicing her opinion on beauty and self-esteem stated: “When I hear people talk about how light-skinned girls are more attractive than other Black girls, it truly does make me angry! If a man or anyone thought I was beautiful because I am biracial or whatever, I would be highly offended!”

A fact that isn’t known to most dark-skinned women is that self-esteem issues are present in light-skinned woman as well.

Maryland therapist Yasmeen Mabry, LCPC, says she has “encountered few Black women who openly admit to disliking themselves due to the hue of their skin. The dislike is internalized and manifested in other aspects of daily living, such as the hue of the partner they choose to have children with, purchasing skin care products with bleaching agents, and refusing to sun bathe. Actions that validate skin color are the underlying issues.”

Rikki, being light-skinned, empathizes with what she likes to call her “dark-skinned sistas.” Even she struggles with her appearance. Rikki stated: “I cut my hair for this exact reason. I don’t want to be associated with that stereotype of the pretty light-skinned girl with the long, curly hair.”

A fact that isn’t known to most dark-skinned women is that self-esteem issues are present in light-skinned woman as well.

Speaking more in depth about the struggle of being light-skinned, Rikki says: “I feel like I might be at a disadvantage when it comes to relating to people. It is quite possible that people judge me based on what I look like, which is very common, before they actually even hear me speak. They might think I am that typical light-skinned mixed girl who thinks she is better than everyone else or prettier because she is mixed and light-skinned. That is not me at all.”

Rikki looks to her mother, a dark-skinned Black woman, as a form of inspiration: a constant reminder as to why Black is beautiful regardless of her skin tone.

Rikki states: “A beautiful Black queen raised me. She helped shape me into the woman I am today. It is because of how I see her that I view myself as a Black queen also. My mother exudes Blackness, Black beauty, she loves being Black. So how could I not do the same?”

Even though she is aware of the stereotypes that come with being light-skinned, Rikki says, while showing herself as an example, “I don’t regret being light-skinned because it has made me who I am. Blackness is so diverse, and I just see the fact of me being biracial as another facet of Blackness. This is how beautiful Black is. Look at the beauty Black women create. We did this!”

In Rikki’s own words, “I am not attractive physically, mentally, emotionally and spiritually etc. because I am biracial and light-skinned. I am who I am because I have the joyous privilege of being BLACK.”

A privilege that Black women everywhere no matter what the shade should embrace! So ladies – black, brown, yellow and light – say it loud: “I’m Black and I’m proud!”

Karen Moore is a writer, WHBC on-air personality and public relations major at Howard University in Washington, D.C. She can be reached at karenmoore1220@gmail.com.