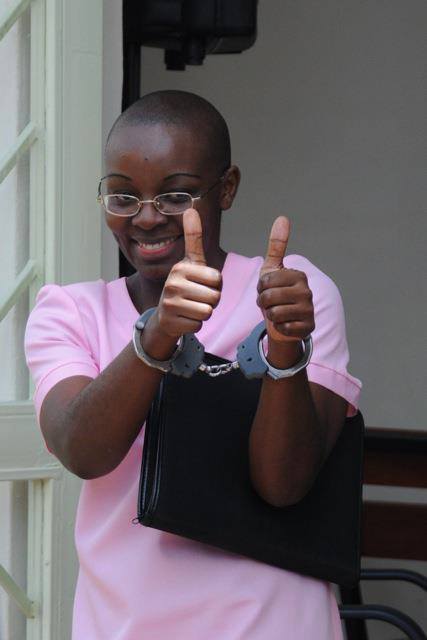 KPFA Evening News Anchor: Yesterday, while Rwandan President Paul Kagame was in South Africa to pay his last respects to Nelson Mandela, the Rwandan Supreme Court upheld the conviction of imprisoned opposition leader Victoire Ingabire and extended her sentence from eight to fifteen years. As she left the courtroom, Ingabire gave her usual thumbs up salute and urged her supporters not to be afraid, because, she said, time and history are on their side. KPFA’s Ann Garrison spoke to Rwanda Genocide survivor and African Great Lakes Action Network Executive Director Claude Gatebuke about the court’s ruling.

KPFA/Ann Garrison: Claude, Victoire Ingabire was convicted of conspiring to form an armed group to undermine the government of Rwanda, for seeking to minimize the 1994 genocide by asking that Hutu as well as Tutsi victims be remembered, and for “spreading false rumors” intended to incite the public to rise up against the state. Human Rights Watch said that the charges were politically motivated, and the European Parliament called for justice and said that the first trial did not meet international judicial standards. Is there anything you’d like to add?

Claude Gatebuke: The extension of Ingabire’s sentence is not surprising to those of us who are familiar with how the ruling Rwandan Patriotic Front has always operated. It’s a criminal organization from the very beginning, and they do not like anyone who exposes the inconvenient truth of the crimes they committed. The point of Victoire Ingabire’s speech was not to incite people. It was to spur true reconciliation based in truth telling.

So all of the charges against Ingabire were politically motivated. There are many other Rwandans who are in jail today for simply disagreeing with the Rwandan government led by Gen. Kagame. And those include genocide survivors such as Deo Mushayidi.

The other thing is that 60% or nearly 60% of the Parliament in Rwanda is women. However, all those women are the puppets of the RPF. And today, the only woman who was brave enough to stand up and speak up against the atrocities committed by the RPF, by the ruling party, is in jail. She’s serving 15 years for simply exercising a right that is guaranteed under international law. It is a universal human right to have your freedom of speech.

And, nothing she said was new. President Kagame himself has admitted, on April 13th of 2010, Paul Kagame made a speech and admitted to massacring Hutu refugees in the Congo. Many other times he’s made the same admission. So she’s not saying anything new. She’s just being punished for stating an inconvenient truth that the RPF, the ruling party in Rwanda, has committed crimes against Rwandan citizens.

KPFA/Ann Garrison: OK, now wait a minute. I think you must mean that he made this 2010 speech or any of these other admissions in the Kinyarwanda language to a Kinyarwanda speaking audience, right?

Claude Gatebuke: Yes, all of the admissions that I have heard are in Kinyarwanda, and the specific speech in 2010, April 13, 2010, was in Parliament, in Kinyarwanda, during the swearing in ceremony of the military leaders, and these included Gen. James Kabarebe, who was made minister of defense at that time, and Gen. Charles Kayonga, who was made military chief of staff of Rwanda and, as you know, both of them – Kayonga and Kabarebe – are implicated in the recent rebellion, or the militia, M23, as the commanders of that militia, who were providing support, command and ammunition. And that militia has ravaged the eastern Congo and displaced over a million people.

Paul Kagame made a speech and admitted to massacring Hutu refugees in the Congo. Many other times he’s made the same admission.

KPFA: You’re a Rwanda Genocide survivor, but you’re also very active with Friends of the Congo. Could you say something about the significance of Victoire’s case in the Democratic Republic of the Congo, and particularly its eastern Kivu Provinces bordering Rwanda? 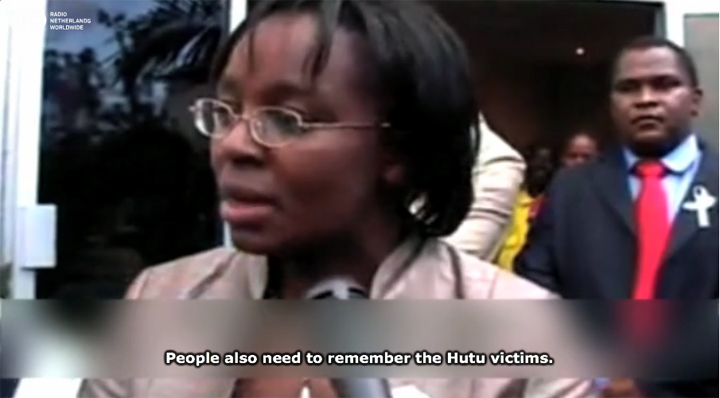 Claude Gatebuke: Victoire Ingabire does not believe in invading the neighbors. She believes in living peacefully with your neighbors, and if there is a conflict, resolving it peacefully. So it is very significant. If Victoire Ingabire was allowed to run for president in Rwanda, and she won, there would be a major change in how Rwandans and Congolese live as neighbors, because that would be the end of Rwanda invading Congo.

KPFA: Is there anything you’d like to say about President Kagame being in South Africa to pay his last respects to Nelson Mandela while the court ruled?

Claude Gatebuke: As for Kagame being in South Africa during the ruling of the court, I think it’s an insult to freedom and peace loving humans that a war criminal such as Kagame came to pay respects to peace loving Mandela. He should instead be in court being tried for the crimes he’s committed against Rwandan people – Hutus, Tutsis, Twas – and for the crimes he’s committed against Congolese.

If Victoire Ingabire was allowed to run for president in Rwanda, and she won, there would be a major change in how Rwandans and Congolese live as neighbors, because that would be the end of Rwanda invading Congo.