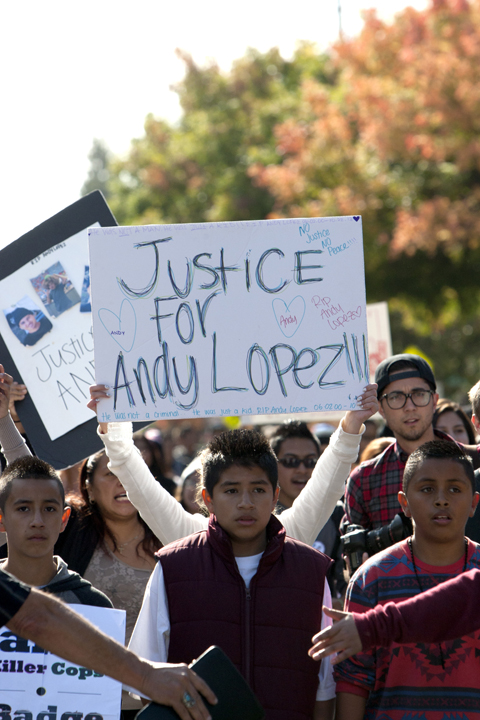 The DA’s press release failed to mention a single word as to the actual findings of SRPD’s report. While DA Ravitch praised the SRPD for its “thorough review” of the Oct. 22 shooting of Andy, the press release dodged the essential issue – the finding of the report as to the criminal liability of Deputy Gelhaus. After over three months, the public demands to know the results of the investigative report, but mum is the word.

“The impenetrable code of silence surrounding the SRPD’s investigative report is precisely what we have both feared and predicted,” said JCAL attorney Jonathan Melrod. “JCAL has maintained from the outset of the investigation that the SRPD is incapable of conducting an unbiased, transparent review of Deputy Gelhaus’ shooting of Andy. By not releasing a single detail, the report amounts to a continued whitewash of this wanton, brutal murder of a young Latino boy in the Moorland community.”

JCAL organizer Mary Moore agreed. “We have maintained even before Andy’s killing that Sonoma County needs an independent eye looking at ongoing law enforcement issues in our community, as this issue has a long history. In 1998, after a spate of police related deaths of civilians, we were able to get the U.S. Civil Rights Commission up here for hearings.

“Their report, issued in 2000, sided with the community concerns and made several recommendations which have been ignored since then,” she said. “Independent oversight is desperately needed and that does not mean one local law enforcement group investigating another.”

DA Ravitch went on to lay groundwork for not issuing her finding as to whether Deputy Gelhaus “violated criminal law” within the 90-day period allotted to her office to make a final decision. “I caution the public to remember that this timeline is not a legal requirement but a recommendation,” said DA Ravitch.

“The impenetrable code of silence surrounding the SRPD’s investigative report is precisely what we have both feared and predicted,” said JCAL attorney Jonathan Melrod.

Pushing her decision past the 90-day mark allows the DA to remain silent until after Election Day June 3. JCAL dismisses talk of exceeding the 90-day period as a dodge to allow Ravitch to skate by Election Day without taking action to indict Deputy Gelhaus for the murder of Andy.

“The SRPD is incapable of conducting an unbiased, transparent review of Deputy Gelhaus’ shooting of Andy. By not releasing a single detail, the report amounts to a continued whitewash of this wanton, brutal murder of a young Latino boy in the Moorland community.”

According to JCAL’s Jonathan Melrod, “Last night the Coalition endorsed a robust “90 Day Justice Campaign” to demand that DA Ravitch unequivocally respect the 90-day period and move to indict Deputy Gelhaus. We have plans for a concerted series of weekly and monthly protests that will continue to include mobilization of the Latino community in southwest Santa Rosa, marches and street demonstrations, aggressive lawsuits targeting police harassment and attendance at City Council and County Board meetings. This spring’s Justice Campaign will culminate in a massive statewide march in Santa Rosa on June 20 in commemoration of what would be Andy’s 14th birthday.”

To reach JCAL, email Jon Melrod at jonathan4536@sbcglobal.net, Ramon Cairo (Spanish) at cairo.ramon@yahoo.com or Mary Moore at justice3@sonic.net. Visit their website at www.justicecoalitionforandylopez.com.