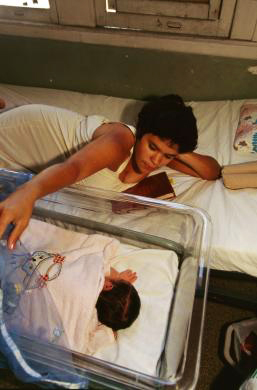 “Florida’s infant mortality rate is at an all-time low,” reports the Tampa Tribune. So is Cuba’s, according to Prensa Latina.

In Miami, the infant mortality rate dropped from 6.4 out of every 1,000 live births in 2011 to 6 in 2013. “State health officials credit improved prenatal and infant health care for the good news,” says the Tribune.

By that measure, Cuba’s prenatal and infant health care must be much better than Miami’s, where 34 percent of the population is Cuban.

“Cuba recorded a rate of 4.2 per thousand live births, and eight provinces were below the national rate,” Prensa Latina reports. “Of the country’s 168 municipalities, 22 had no child dead.

“Granma explained that the main causes of the death of children under one year old are mainly perinatal conditions, congenital abnormalities and infections.

“This time 45 fewer children than in 2012 died from congenital malformations, which keeps Cuba among the countries with the lowest infant mortality from this cause. According to preliminary data provided by the National Board of Medical Records and Statistics of the Ministry of Public Health, last year there were 125,830 births, 156 more than in 2012.

“Granma newspaper said that Cuba also strengthens the results of the program aimed at reducing complications and maternal deaths, reporting only 26 deaths directly related to pregnancy, childbirth and postpartum.

“In this regard, Cuba achieved a direct maternal mortality rate of 20.7 per 100,000 live births, the lowest in the country’s history.”