KPFA Evening News Anchor Anthony Fest: Turning now to news from Africa, The New York Times reported on Friday that the U.S. has no direct plans for military intervention in South Sudan but is nonetheless “consulting” with Uganda and Ethiopia about sending their troops in to defend the South Sudanese government. Uganda and Ethiopia are two of the U.S.’ closest military partners on the African continent. Uganda borders South Sudan to the south, Ethiopia to the east. 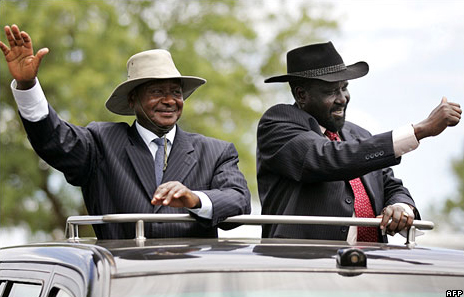 However, the South Sudan Human Rights Society for Advocacy published a critique of Ugandan President Yoweri Museveni’s role in destabilizing South Sudan during the past year. Museveni, they wrote, has encouraged the South Sudanese government to put their faith in the Ugandan army’s military might to back up their own forces against internal political critics. KPFA’s Ann Garrison has more.

KPFA/Ann Garrison: The South Sudan Human Rights Society for Advocacy is based in both Juba and Kampala, the capitals of South Sudan and Uganda. In a statement published in the New York City-based Black Star News, they called South Sudan’s President Kiir and Uganda’s President Museveni an unholy alliance and called on the international community not to let Museveni destroy South Sudan.

The NGO also called the designation of Museveni as one of the central mediators in the Addis Ababa peace talks “an unforgivable betrayal of the people of South Sudan by the international community.” The U.S., U.K. and other nations, they wrote, should “rise up to prevent more bloodbaths fueled by Mr. Museveni in South Sudan.”

Two South Sudanese diaspora groups, one based in Washington, D.C., another in Toronto, issued similar statements, and representatives of each spoke to KPFA.

Gateluke Reat, of the Toronto-based North American Nuer Congress, said that the U.N. Mission in South Sudan ignored the progressive destabilization of the country as Salva Kiir violated the Constitution and became more and more dictatorial with the backing of Yoweri Museveni and his army.

Gateluke Reat: Uganda, with Museveni, has a history, in the Great Lakes Region, of destruction. Had it not been the case that the Ugandan army was in South Sudan, all this kind of thing would never happen, because Salva Kiir himself will not order the killing because he knows that if he does, he will be the first person to die.

KPFA: Gatluak Peter of the Washington, D.C.-based Alliance for South Sudanese in Diaspora said that he does not want South Sudanese to keep killing each other, but that the only way to stop the war now is for Salva Kiir to step down and make way for a transitional government.

And then he went and pulled a gun and killed his own people. Now, what would you do? People are resolving to take him out from the power. If he’s now agreed to leave the power, there’s no reason for people of South Sudan to kill themselves.

These are brothers and sisters, and there shouldn’t be any reason for them to kill. And what the world should do is to come in and tell the president to leave. He has been in power since 2005. This is a long time for President Kiir, and he should leave the power.

KPFA: Despite his designation as a mediator in Addis Ababa, President Museveni threatened to cross the border and come after opposition leader Riek Machar, the deposed deputy vice president now commanding forces fighting Salva Kiir, which are reported to include divisions of the national army that have defected.

Members of Uganda’s own Parliament called on Museveni to stop recklessly warmongering and recuse himself as a mediator at the peace talks in Addis Ababa.