A new study of the effects of tiny quantities of radioactive fallout from Fukushima on the health of babies born in California shows a significant excess of hypothyroidism caused by the radioactive contamination travelling 5,000 miles across the Pacific. The article has been published in the peer-reviewed journal Open Journal of Pediatrics. 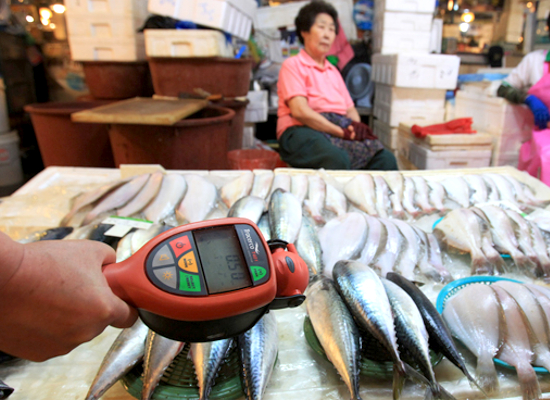 Congenital hypothyroidism is a rare but serious condition normally affecting about one child in 2,000 and one that demands clinical intervention – the growth of children suffering from the condition is affected if they are left untreated. All babies born in California are monitored at birth for Thyroid Stimulating Hormone (TSH) levels in blood, since high levels indicate hypothyroidism.

Joe Mangano and Janette Sherman of the Radiation and Public Health Project in New York, and Christopher Busby, guest researcher at Jacobs University, Bremen, examined congenital hypothyroidism (CH) rates in newborns using data obtained from the state of California over the period of the Fukushima explosions.

Their results are published in their paper “Changes in confirmed plus borderline cases of congenital hypothyroidism in California as a function of environmental fallout from the Fukushima nuclear meltdown.” The researchers compared data for babies exposed to radioactive Iodine-131 and born between March 17 and Dec. 31, 2011, with unexposed babies born in 2011 before the exposures plus those born in 2012.

Confirmed cases of hypothyroidism, defined as those with TSH level greater than 29 units increased by 21 percent in the group of babies that were exposed to excess radioactive Iodine in the womb. The same group of children had a 27 percent increase in “borderline cases.”

Contrary to many reports, the explosion of the reactors and spent fuel pools at Fukushima produced levels of radioactive contamination which were comparable with the Chernobyl releases in 1986. Using estimates made by the Norwegian Air Laboratory, it is possible to estimate that more than 250PBq (200 x 1015) Bq of Iodine-131 (half life eight days) were released at Fukushima.

This is also predicted by comparing the Caesium-137 estimates with I-131 releases from Chernobyl, quantities which caused the thyroid cancer epidemic in Byelarus, the Ukraine and parts of the Russian Republic.

More on this later. At Fukushima, the winds generally blew the radioactive iodine and other volatile radionuclides out to sea, to the Pacific Ocean. The journey 5,000 miles to the West Coast of the USA leaves a lot of time for dispersal and dilution. Nevertheless, small amounts of I-131 were measured in milk, causing widespread concern.

Contrary to many reports, the explosion of the reactors and spent fuel pools at Fukushima produced levels of radioactive contamination which were comparable with the Chernobyl releases in 1986.

The authorities downplayed any risk on the basis that the “doses” were very low, far lower than the natural background radiation. The University of California, Berkeley, measured I-131 in rainwater from March 18 to 28, 2011, after which levels fell. If we assume that mothers drank one liter of rainwater a day for this period (of course they didn’t) the current radiation risk model of the International Commission on Radiological Protection (ICRP) calculates an absorbed dose to the adult thyroid of 23 microSieverts, less than 1/100th the annual background “dose.” The fetus is more sensitive (by a factor of about 10, according to ICRP) but is exposed to less, as it is perhaps 100 times smaller.

So this finding is one more instance of the fact that the current radiation risk model, employed by the governments of every nation, is massively insecure for predicting harm from internal radionuclide exposures or explaining the clear observations.

The Fukushima catastrophe has been dismissed as a potential cause of health effects even in Japan, let alone as far away as California. And on what basis? Because the “dose” is too low.

This is the mantra chanted by the International Atomic Energy Agency (IAEA), the World Health Organization (WHO), largely the same outfit), and the United Nations Scientific Committee on the Effects of Atomic Radiation (UNSCEAR). And let’s not forget all the nuclear scientists who swooped down on Fukushima with their International Conferences and placatory soothing presentations.

This chant was heard after Chernobyl, after the nuclear site child leukemias; in the nuclear atmospheric test veterans’ cases; and in all the other clear situations which in any unbiased scientific arena would long ago have blown away the belief that low level internal exposures are safe.

The Fukushima catastrophe has been dismissed as a potential cause of health effects even in Japan, let alone as far away as California. And on what basis? Because the “dose” is too low.

But this one-size-fits-all concept of “dose” is the nuclear industry’s sinking ship. It provides essential cover for the use of uranium weapons, whether fission bombs or depleted uranium munitions; for the development of nuclear power stations like Hinkley Point; the burying of radioactive waste in landfills in middle England; releases of plutonium to the Irish Sea from Sellafield (where it drifts ashore and causes increases in cancer on the coasts of Wales and Ireland); and, most recently, for the British government’s denial of excess cancers among nuclear test veterans.

This new study is not the first to draw attention to the sensitivity of the unborn baby to internal fission products. In 2009 I used data supplied to me when I was a member of the U.K. government Committee Examining Radiation Risks from Internal Emitters (CERRIE) to carry out a meta-analysis of infant leukemia rates in five countries in Europe: England and Wales, Germany, Greece and Byelarus.

There had been an unexpected and statistically significant increase in infant leukemia (age 0-1) in those children who were in the womb during the (whole body monitored) increased levels of Caesium-137 from Chernobyl. The beauty of this study, like the TSH study, is that, unlike the Sellafield child leukemias, there is really no possible alternative explanation.

It was the low “dose” of Caesium-137 that caused the leukemias. And the dose response trend was not a straight line: The effect at the very low “dose” was greater than at the very high “dose.” Presumably because at the high doses the babies perished in the womb and could not, therefore, develop leukemia. I published the results and drew attention to the failure of the ICRP model in the International Journal of Environment and Public Health in 2009.

It was the low “dose” of Caesium-137 that caused the leukemias.

I had published a paper on this infant leukemia proof of the failure of the risk model in Energy and Environment in 2000 and also presented it in the same year at the World Health Organization conference in Kiev. It was there that I first really came up against the inversion of science deployed by the chiefs of the IAEA and UNSCEAR. The conference was videofilmed by Wladimir Tchertkoff and you can see his excellent documentary, which made it to Swiss TV, “Atomic Lies,” re-released in 2004 as “Nuclear Controversies.”

For what is done by these people is to dismiss any evidence of increased rates of cancer or any other disease by shouting at it: “The doses were too low.” In this way, reality is airbrushed away. What is this quantity, “dose”? It is a simple physics-based quantity which represents the absorption of energy from radiation. One Sievert of gamma radiation is one Joule per kilogram of living tissue.

This might work for external radiation. But it doesn’t work for internal exposures to radioactive elements which can produce huge effects on cellular DNA at low average “doses.” It is like comparing warming yourself in front of the fire with eating a hot coal. Or comparing a punch to stabbing. Same dose, same energy. Very different effects.

This “dose” scam has been used to dismiss real effects since it was invented in 1952 to deal with the exposures from nuclear weapons development and testing. For those who want to dig deeper into the science, there is a recent book chapter I wrote in the book “New Research Directions in DNS Repair.”

The most scary instances of the sensitivity of the fetus to radiation are the sex ratio studies of Hagen Scherb, a German biostatistician and member of the European Committee on Radiation Risk (ECRR). With his colleague Christina Voigt, he has published a series of papers showing a sudden change in the sex ratio of newborns after various radiation exposure incidents.

Sex ratio, the number of boys born to 1,000 girls is a well accepted indicator of genetic damage and perturbations in the normal ratio of 1,050 boys to 1,000 girls are due to the deaths before birth of radiation damaged individuals of one sex or the other depending on whether the father (sperm) or mother (egg) was most exposed.

We found such an effect – more girls – in our study of Fallujah, Iraq, where there was exposure to uranium weapons. But Scherb and Voigt have looked at the major catastrophes, Chernobyl, the weapons tests fallout, near nuclear sites in data from many countries of the world. Huge datasets.

They estimate that millions of babies have been killed by these subtle internal radiation exposures. The nuclear military project is responsible for an awful lot of deaths. In years to come, I believe this will eventually be seen as the greatest public health scandal in human history.

Of course, the exposure to radio-Iodine is associated with thyroid cancer in children. There was a big rise of thyroid cancer in Byelarus, the Ukraine and the Russian Republic after Chernobyl. The situation at Fukushima seems set to echo this, despite the reassurances from the authorities that there will be no effects.

Our paper reports 44 confirmed thyroid cancer cases in 0-18-year-olds in Fukushima prefecture in the last six months – a figure that has since risen to 53. In the hypothyroidism paper, we discuss the 44 cases relative to the population and calculate that this represents an 80-fold excess based on national data prior to the Fukushima Iodine releases.

The nuclear military project is responsible for an awful lot of deaths. In years to come, I believe this will eventually be seen as the greatest public health scandal in human history.

This presents a severe challenge to Dr. Wolfgang Weiss of the U.N. and WHO, who stated last year that no thyroid cancers could result from the Fukushima disaster as the “doses were too low.” How does he explain the 80-fold increase in this normally rare condition?

Or rather, when will he admit that the entire scientific model that underpins his views is fraudulent? And that nuclear radiation is – roughly speaking – 1,000 times more dangerous to human health than he is letting on?

Chris Busby is the scientific secretary of the European Committee on Radiation Risk. For details and current CV see www.chrisbusbyexposed.org. For accounts of his work, see www.greeenaudit.org, www.llrc.org and www.nuclearjustice.org. This article previously appeared on Counterpunch. Busby can be reached on Facebook at Dr. Chris Busby Exposed.