On Monday, Feb. 3, residents of Midtown Park Apartments, joined by civil rights nonprofit Brightline Defense, legal services provider AIDS Legal Referral Panel and over 50 supporters, filed the biggest rent control petition in the history of the City and County of San Francisco. The petition requests protection against unlawful rent increases and evictions for 139 low- and moderate-income Western Addition households, representing approximately 300 tenants, after their landlord, the City and County of San Francisco, terminated their lease on Friday, Jan. 31.

Midtown, a diverse and resilient community of working class families and seniors of color that survived the wave of Redevelopment Agency urban renewal that decimated their neighborhood in the 1960s and 1970s, is in many ways emblematic of the struggle many San Franciscans face to remain in San Francisco during the escalating affordability crisis. The refrain heard often from Midtown supporters during Monday’s press conference and historic tenant rights announcement was “We Are Midtown.”

Local media outlets such as the San Francisco Examiner, ABC Channel 7, KTSF Channel 26 and KPFA Radio covered the event, which featured allies from around the City, including Dr. Espanola Jackson, known as the Godmother of Bayview Hunters Point, community-labor activists from Aboriginal Blackman United, and members of the San Francisco Latino Democratic Club, who last month voted unanimously to support Midtown residents in their efforts.

Midtown is a rainbow cross-section of San Francisco, including Black, Latino, Asian, Pacific Islander and White residents. It was the home of journalism legend Dr. Carlton B. Goodlett during a time when he published the Sun-Reporter. Community leader and labor activist Orville Luster served as a Midtown board president for more than 10 years.

Community fears of displacement and support for Midtown escalated when the Mayor’s Office of Housing Director Olson Lee inexplicably terminated Midtown’s 45-year-old lease in an email from his staff sent last Christmas Eve. Director Lee indicated that termination of the lease was necessary to implement rent hikes and circulate new lease agreements in order to fund basic maintenance and repairs that the City has failed to make for decades.

Dozens of Midtown residents led an intensive campaign to request Director Lee’s withdrawal of the lease termination, including a visit to the San Francisco Board of Supervisors on Jan. 28, but Director Lee declined the request last Friday.

The upside of Mayor’s Office of Housing’s decision to terminate the Midtown lease and leave 139 households without any form of tenant protection is that termination also stripped the Board of Supervisors of its power to establish rents at Midtown. That clause, according to the San Francisco Rent Ordinance, exempted Midtown from rent control and “just cause” eviction protections because residents whose rents are “controlled or regulated by any government unit, agency or authority” do not receive Rent Ordinance protection. 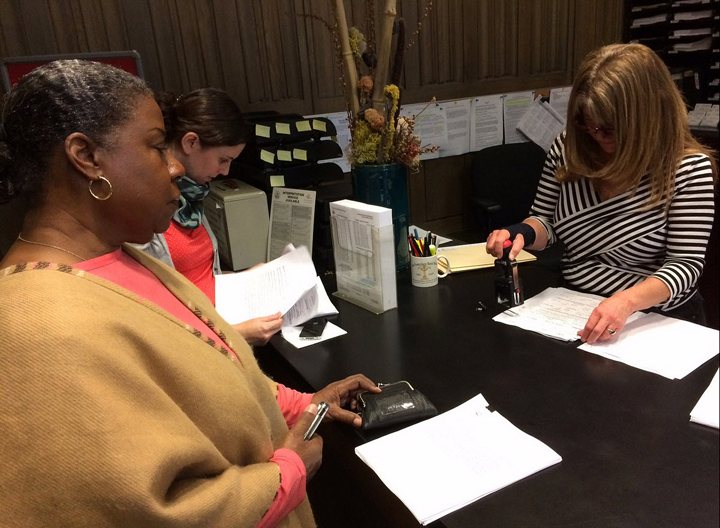 Midtown resident Natacha Yarbrough has joined Midtown’s resident-elected board of directors in educating Midtown residents of their rights during what has been an extremely stressful Christmas season and January at Midtown. Yarbrough uncovered “a typographical error” in a Planning Department document that suggested a City-backed plan to demolish all six Midtown buildings and began circulating Rent Board petitions even before Director Lee terminated the Midtown lease. When termination became effective on Jan. 31, rent control protection became automatic, making Monday’s historic Rent Board petition in some ways a formality.

“In our fight for survival, today has shown that we shall overcome,” said Midtown Board President Marchell Johnson. “We have a great team of residents, community partners and lawyers who are going to help us Save Midtown and win.”

“Midtown represents so much of San Francisco – African American, Latino American, Asian American and white low- to moderate-income residents alike – all facing the threat of displacement,” said Eddie Ahn, policy counsel for Brightline Defense. “In a time where everyone worries about the cost of housing and living in the City, we are Midtown.”

“The residents of Midtown Park have a strong legal argument that with the termination of the master lease, their tenancies are now governed by the SF Rent Ordinance,” said Jaime Rush, housing attorney for AIDS Legal Referral Panel. “Long-term San Francisco tenants should not be afforded fewer protections just because the property they rent is owned by the City.”

If you would like to support our “We Are Midtown” campaign, you can do so through our secured online donation system. Or drop us a line that says “I Am Midtown.”