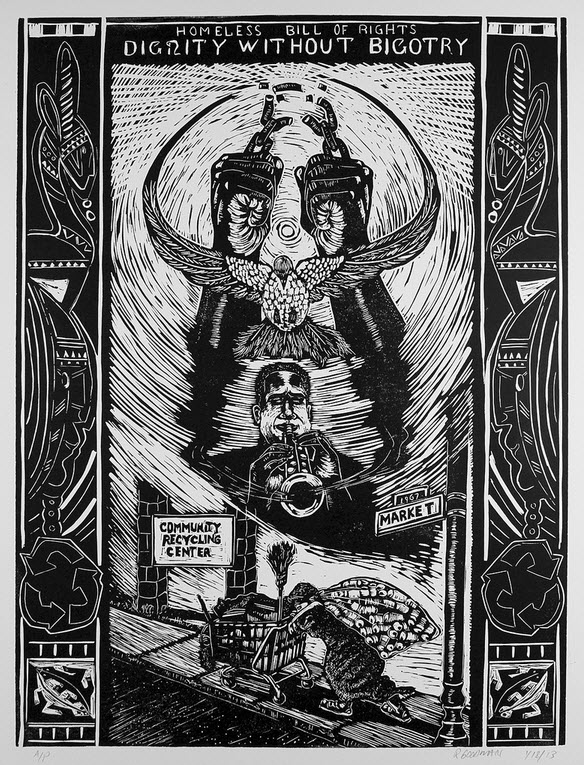 You and a guest enjoy warm roast chicken.

They snatch your plates. Station cops sock you with two $50 citations.

You climb into bed, exhausted. Your BeautyRest cradles you.

More cops jolt you awake. “Only Sealy is sanctioned!”

In a doorway, you curl on concrete against the cold.

Why are the unhoused forbidden to sit, eat, sleep like housed people? 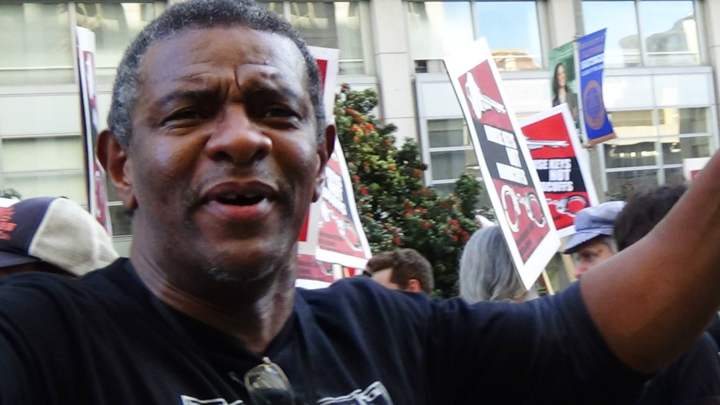 From 2005 to 2014, WRAP has worked to build a large people’s movement rooted in and accountable to groups and individuals defending poor peoples’ constitutionally-guaranteed human right to exist in public space, acquire housing and employment, and enjoy equal protection under law.

Seattle convened a housing and displacement panel followed by a poor peoples’ march to a local park. 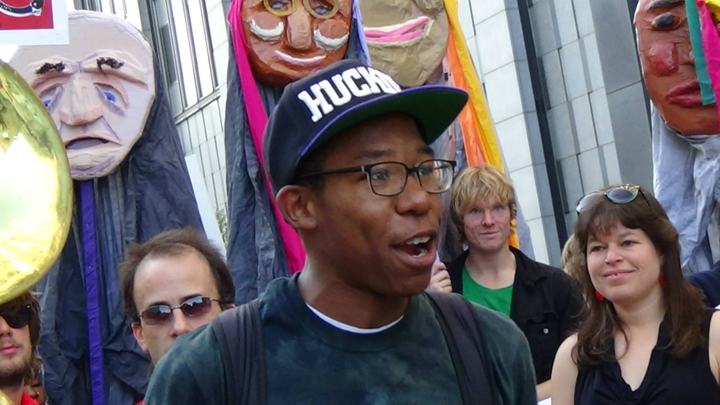 Eureka coordinated citywide flyering, educating people about the Days of Action Campaign, and encouraging them to join.

For many years, homeless Albany citizens have lived on a Bay peninsula landfill now known as “The Bulb.” Before the city finalizes its current eviction threats, residents conducted tours of hauntingly beautiful art they constructed from trash. Anti-eviction activists also held a sleep-out in front of the offices of Richard Cheasty, president of Citizens for East Shore Parks, one of the major proponents of the eviction.

Wanda Jones spoke for unhoused people everywhere: “We have no rights, we have police brutality and we have people being hurt and killed out here on the street. We have no protection whatsoever.”

Community United Against Violence (CUAV) members supplied to LGBTQ folks information on self-determination, safety, and ways to respond to and heal from violence.

St. James Infirmary gave sex workers, many of whom are homeless, information on HIV and STI testing, health and safety, needle exchange and harm reduction supplies.

In 2013, Rhode Island, Connecticut and Illinois passed homeless bills focused on anti-discrimination. In an interview, Boden applauded these states’ achievements but noted “their local governments can still have sit-lie laws so long as they claim it applies to the rich as well as the poor.” These laws did not go far enough for what WRAP is trying to achieve.

AB 5 was the only proposal over-writing city laws that segregate and criminalize the unhoused not for behaviors, but for monetary or class status – for just existing.

Assembly Bill 5 encouraged housed Californians to view eating, sleeping, sitting and standing by their outside counterparts as equally necessary and lawful life-sustaining acts they take for granted within their four walls.

Preparatory to launching “The Right to Exist,” a national campaign and social justice model for other states, WRAP’s grassroots teams have been interviewing homeless people, painstakingly documenting their interactions with police, business district security and the criminal justice system. To date, 1,276 people have been asked what injustices they have experienced.

Terming its findings, “an affront to fairness and decency,” WRAP disclosed that 81 percent of respondents reported harassment, citation or arrest for sleeping; 78 percent for sitting or lying on sidewalks; 66 percent for loitering.” Only 26 percent reported they knew of a safe place to sleep.

Why are poor and homeless citizens deprived of basic human rights housed people take for granted? 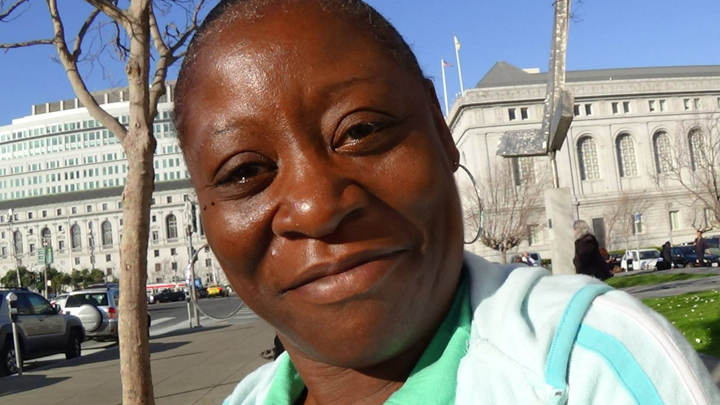 Why are Western Regional Advocacy Project and its member organization, the San Francisco Coalition on Homelessness, forced to struggle for a duplicative bill to ensure constitutional rights homeless and poor people already possess? As Bartholow told marchers, “We are fighting not for special rights, but for the same rights that everybody else has.”

In WRAP’s position papers, Boden suggests that, historically, something in the American psyche needs to cling to a “mainstream” concept demonizing and forcing to the margins scapegoat groups – African-Americans, Japanese, Irish and Jewish people, LGBTQ folks, women, the disabled, even elders.

San Francisco’s latter-day “ugly laws,” he writes, forbad people with “unsightly or disgusting” disabilities from appearing in public. “From 1866 to 1947, Chinese residents of San Francisco were forced to live in one area of the city.” After the Civil War, Southern states’ Jim Crow laws targeted Blacks.”

Boden’s analysis updates these attempts to label homeless people as “the other” and disappear them. Today’s “broken windows” theory is a criminal justice concept formulated by New York’s right wing think tank, the Manhattan Project. It promotes the idea that if urban landscapes tolerate homeless people, who are like fragments of broken glass lying on the ground, the neighborhood will decay.

“The sidewalks belong to the people,” he replied. “They’re public property. Public means all of us. Therefore, the people who are restricting public space are the ones committing the crime.”

When WRAP campaign members succeed in passing Homeless Bill of Rights legislation at the state level, Boden insists victory will come, as with Jim Crow and Ugly Laws, from the power of many people saying, ‘Enough is enough.’ With unemployment, foreclosures, and the disappearing middle class joining homeless ranks, that power-push for change may not be far behind.

The National Alliance to End Homelessness documents that between 2010 and 2011, “the majority of states reported a decrease in median household income” with the national poverty rate increasing from 15.3 percent to 15.9 percent, “an almost 5 percent increase.” As a result, more than 48 million people lived in poverty in 2011.

“Nationally, 28 states and the District of Columbia saw increases in homelessness” – more than half the country, according to the National Alliance to End Homelessness.

WRAP’s website notes, “The numbers of homeless children attending public school has almost doubled, 600,000 to 1.1 million in the past eight years!”

At the rally, Joe Wilson, San Francisco’s Hospitality House Program Director, told the crowd, “Every day in this country, 100 children are born into poverty.” This is “immoral” and “unacceptable,” he said.

Boden explained that AB 5 didn’t pass because local governments won’t easily relinquish the power to criminalize poor people, remove them from downtown areas and get them off the streets.

Business people in various cities lobbied their Sacramento representatives against AB 5, concerned that, if the bill became law, it would hobble local controls on what they labeled “quality of life crimes” like panhandling and public urination. 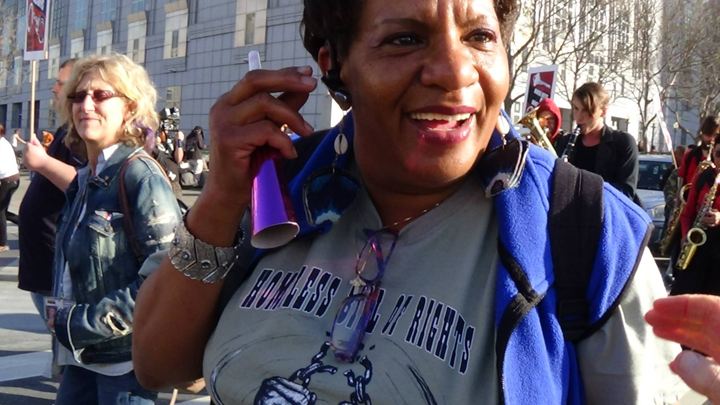 At the California Supreme Court Building, Bartholow announced, “The Chamber of Commerce said that if we give people basic human rights, we’ll kill jobs.

“The League of Cities opposed our bill. They said they didn’t know what to do about homelessness and … their only tool to address homelessness was to arrest people, put them in prison and take away their civil liberties because they need to sleep.

In politics, the tool of the lobbyist for corporate power is money. Social justice groups – people in large numbers – strengthen their power through community organizing and relentless action. Boden emphasized that WRAP and its 56 West Coast endorsing supporters conducted the Jan. 17-20, 2014, Days of Action as part of a power-building campaign, gradually accruing numbers to put mass pressure on legislators, “so that one day we can get AB 5 passed.”

Any reconstituted homeless bill of rights mandates will reflect the will of surveyed homeless interviewees.

WRAP’s Homeless Bill of Rights (HBR) campaign in Oregon and California “will create bills that protect the following rights and prohibit the enforcement of any local laws that violate these rights:

“Right to move freely, rest, sleep and pray and be protected in public spaces without discrimination.

“Right to serve food and eat in public.

“Right to legal counsel if being prosecuted.

Colleen Rivecca, advocacy coordinator at St. Anthony Foundation, likened the fight to convince legislators to pass a homeless bill of rights to the ad nauseam repetitions required to finally get your dog to sit.

Coalition on Homelessness Director, Jennifer Friedenbach promised marchers, “We are going to come back and come back till we get this thing!”