KPFA Evening News Anchor Anthony Fest: Turning now to news from Africa, this week’s mining and business headlines reported that Israeli billionaire Dan Gertler turned a profit of nearly 30,000 percent by buying the Democratic Republic of the Congo’s oil rights in waters off its Atlantic Coast in 2006, then selling the same rights back to them six years later. KPFA’s Ann Garrison spoke to anti-corruption and resource theft watchdog Global Witness and filed this report.

Daniel Balint-Kurti: So, in 2006, Nessergy, an offshore company associated with the businessman Dan Gertler, bought an oil block from the Congolese state for a signature bonus of half a million dollars. And then, six years later, it sold the block back to Congo for at least $150 million. That’s 300 times what it paid for it. 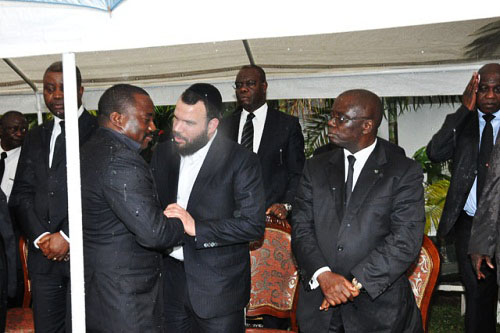 And then Angola was involved as well because the oil block is part of a shared oil zone with Angola, so Angola paid the money in the first instance, but ultimately Congo will have to pay because Congo will have to repay the purchase price from future oil revenues. So Congo lost out massively. They sold something for a half million dollars and bought it back for at least $150 million.

KPFA/Ann: Balint-Kurti said that the Atlantic Coast oil deal is just one of many such “grab-and-flip” deals involving Gertler and/or international mining and commodities trading giant Glencore-Xtrata, a corporation that Gertler often collaborates with in the Democratic Republic of the Congo. Just five such deals, he said, between 2010 and 2012, cost the Congolese people more than twice the nation’s annual health and education budgets.

Daniel Balint-Kurti: We collaborated with the African Progress Panel on that stuff. So the APP reportedly calculated that, in between 2010 and 2012, in just five deals, Congo lost out on $1.4 billion, and that’s equivalent to twice the country’s annual spending on health and education combined. So, you know, these are really serious things. And in this money they lost out on, instead of going to the Congolese state, is going to offshore companies registered mainly in the British Virgin Islands.

KPFA: The Fluerette Corp., which holds Nessergy Energy, is 75 percent owned by Dan Gertler himself. But, though Fluerette is incorporated in the British territory of Gibralter, it is in turn held by a company incorporated in the Virgin Islands, which does not require companies it incorporates to reveal shareholders’ names.

Dan Gertler is such a close friend of Congolese President Joseph Kabila that the friendship is assumed to be one of his business calling cards in the Democratic Republic of the Congo. Kabila currently approves all oil contracts on behalf of the Congolese people, but Gertler has told the press that Kabila owns no shares in Nessergy or Fluerette. Global Witness said that he should provide documentation as to who does.

Daniel Balint-Kurti: If you look at most of the world’s big corruption scandals, they involve the use of secretly owned companies. So, with regard to these deals specifically, one of the concerns we’ve expressed is that we don’t know who the owners of these companies are, and if the Fluerette Group, Dan Gertler’s holding company, wants to try to prove that there is no corruption in these deals, an important first step would be to name the beneficiaries at each of these offshore companies involved in the deals.

KPFA: Global Witness and other social justice groups are campaigning to end the international community’s tolerance of offshore incorporation, which enables corrupt “secret sales” to buyers whose names remain unknown.