Or, how I came to hate the Trans Pacific Partnership deal

TPP 101 – Want to eat poisoned food or triple your medication costs? TPP will do that. Confused about how multinational corporations created the TPP, a Trans Pacific Partnership “trade deal” that will hurt people globally? WikiLeaks recently published two chapters of the agreement big corporations developed in years of secret talks. Before we have our say, Obama wants to Fast Track TPP through Congress. Here’s a quick summary of why we should flush the TPP.

Why we should flush the TPP

Do you like knowing your food’s not poisoned? Do you count on steady, secure employment? Do you live on a limited budget and require low-cost generic meds? Do you depend on the internet to get a wide variety of accurate information? 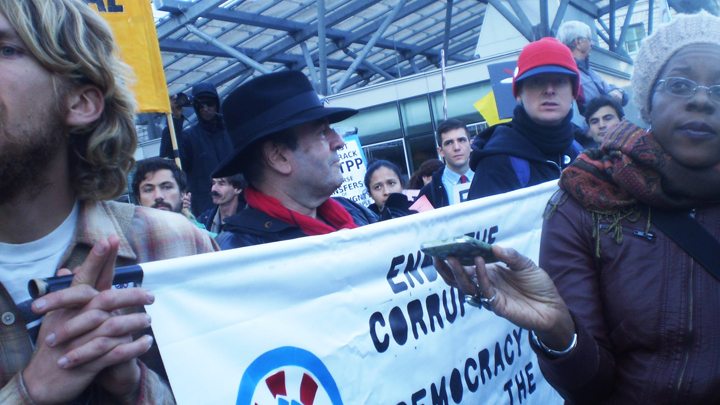 This publication is one of the only places where you will read about the really truly horrific, awful, life-threatening, democracy and human rights-murdering, power-grabbing Trans Pacific Partnership trade deal – the TPP.

Trust me – to survive, you need to know about TPP! You can help stop this bad deal, but only by learning about it.

Despite this broad multinational inclusion, Carlene Pickard, Global Exchange managing director, called TPP an “undemocratic agreement.” For years, the TPP “has been negotiated behind closed doors with input from 500 corporations, but no impact from the public,” she reported at a recent San Francisco protest.

President Barack Obama, who since 2009 has been at the negotiating table with these nations and the multinational corporations that control them, will attempt to fast-track this massive trade agreement through Congress right under the noses of the American people.

If Congress fast-tracks TPP, the super-wealthy corporations who wrote it will threaten – or end – poor and middle class folks’ (that’s us) reliable access and rights to a wide array of goods and services.

Why you don’t know about the TPP?

The mainstream media is covering the TPP agreement minimally, if at all. Jon Queally, Common Dreams staff writer, reported, “According to a new study by Media Matters, over the last six months the network evening news shows – including ABC, NBC, CBS and PBS – have ignored the TPP almost completely.”

This is a video documenting San Francisco’s participation in the Jan. 31 “Intercontinental Day of Action Against the TPP and Corporate Globalization.”

Despite the virtual media blackout on TPP, in that video Pickard observes that Canada, Mexico and the United States saw more than 45 coordinated Jan. 31 protests. “This week 80,000 people signed petitions against Fast Track,” she added.

In the video, you will see a series of experts’ quick summaries of the TPP’s key points, presented to San Francisco throngs who then marched down Market Street from Rep. Nancy Pelosi’s Seventh and Mission Federal Building office to Sen. Dianne Feinstein’s 1 Post St. headquarters.

Most of the speakers’ information was gleaned from WikiLeaks’ unveiling of two out of 29 total chapters of the agreement’s draft text. “The 29 chapters deal with everything from financial services to telecommunications to sanitary standards for food,” reports Lydia Depillis of the Washington Post’s Wonkblog. Specifically, Chapter 1 covers an attempt to curtail intellectual property rights and internet freedoms.

The shroud around the talks and the 27 chapters of unread draft text make much uncertain about TPP. However, based on the leaked portion, Moveon.org labeled TPP “a global corporate coup” and reported this agreement “will greatly empower corporations by virtually eliminating consumer, health, safety, labor, privacy and environmental regulations.”

As Max, an informed Santa Clara student, told me during the protest, the TPP’s multinationals would force U.S. citizens to submit to their greed by forming an overarching “internal trade tribunal,” which would circumvent and supersede the U.S. Constitution by creating laws which delete and overwrite parts of our national laws, including crucial environmental standards. 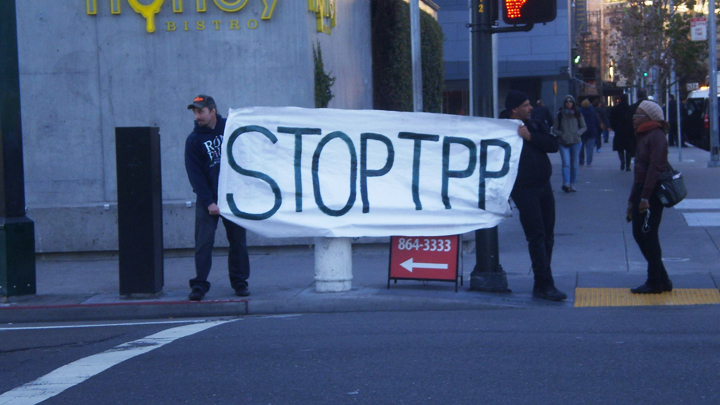 This structure could enable corporations to sue local governments, even individuals, for any activity they think would deprive them of future profits or to launch new attacks against environmental and consumer protections. Said Victor Menotti, executive director of the International Forum on Globalization: “All these agreements where the corporations are the ones who are allowed to write the rules have created this inequality and the ecological crisis that we’re all facing today. This drought, this climate change. This is crazy.”

Menotti spoke of the “600 corporate advisors” allowed to see and influence the writing of the TPP draft laws. Citizens of involved countries are not so favored. Menotti was indignant. “You can’t even look at the text. No debate on the text. And, they want to ram it through,” a reference to President Obama’s vow to fast track the deal. “There’s no way these trade agreements are going to get through if there’s open debate about it,” Menotti insisted.

Should I eat this?

The TPP deal “would import goods not met by U.S. safety standards,” Pickard declared. Tia Lebnerz, organizer for Northern California Food and Water Watch, added that the TPP would allow food importers to force their products which may be suspected of being tainted past border inspectors “while testing is being carried out,” including “farm-raised seafood from places like Vietnam.”

Lebnerz further detailed dangers to food safety such as no GMO labeling. She projected less local food availability. TPP would enable more fracking, she said. This would endanger both food and water sources.

Can I be jailed for singing this song?

According to the Electronic Frontier Foundation’s website, the TPP “threatens to extend restrictive intellectual property (IP) laws – including writing more stringent copyright laws – across the globe and to rewrite international rules on its enforcement,” which would levy criminal action upon anyone who violated global “property rights.” 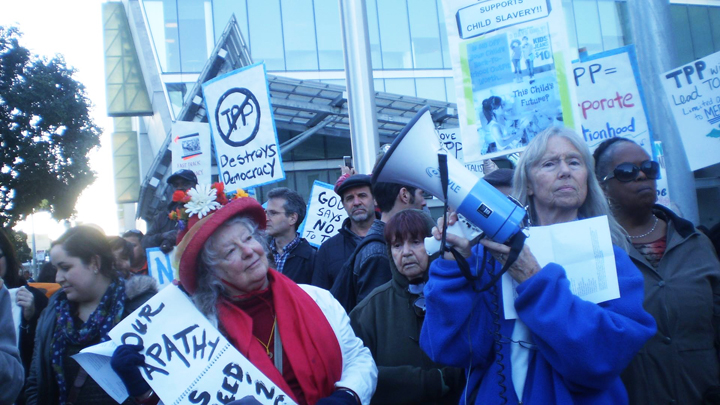 As one of the Raging Grannies singers observed during the protest, if you parody Walt Disney’s song, “Zippity Do-Dah” and upload it to You Tube, TPP’s expanded intellectual property restrictions could cause you to be arrested for criminal activity at a higher than national level.

Will I face arrest if my small business sells my cool new product?

Jake, a Santa Clara student, worried about unfair curtailment of small business’ ability to innovate in creating new products. He noted that TPP favors large, successful companies, edging out smaller entities trying to adapt to a global economy. “The way the patents are going, it’s really unfair. The people in the smaller companies should come first because we’re the majority.”

I’m scared of the internet!

Mira Sutton, Electronic Frontier Foundation Digital Rights international outreach coordinator, warned, “TPP copyright enforcement provisions pose a huge threat to your digital rights.” ISPs like Comcast and websites like Google and Facebook could be incentivized to police your activities, censor and take down your content.

“Do we want the internet to feel less free, more intimidating and more oppressive?” she asked. “These kinds of provisions are in the TPP because we are shut out.”

My job was offshored! How will my family eat?

Pickard noted that TPP “would offshore millions of good-paying jobs.” 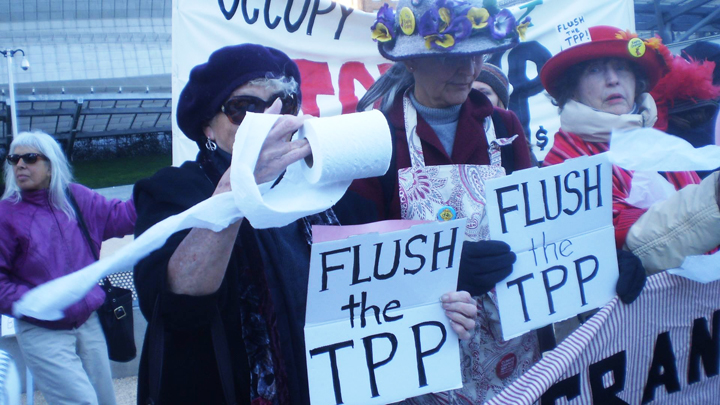 Tim Paulson of the San Francisco Labor Council, told the crowd, “Working families are talking and saying that they absolutely oppose the Fast Track and the TPP,” which would outsource jobs, “put pressure on wages,” and degrade working conditions, “with millions of lost jobs and communities devastated in the wake of closed factories.”

Jane Smith of Occupy San Francisco announced that the TPP put the interests of corporations first. She defined them as “profit-seeking entities that exist only on paper, ahead of real people, who are flesh and blood.” The deal could empower financial firms and groups of banks, like Goldman Sachs and Bank of America, part of TPP’s U.S. business coalition, to “directly attack governmental policies in foreign tribunals,” she said.

Nevada Sen. Harry Reid has said he would deny Obama presidential authority for fast-track, but Congresswoman Pelosi, who was negative on NAFTA, has not yet stated her position. Said Menotti expectantly, “Rep. Pelosi helped stop it [the TPP] in the past. She needs to do it again. “

Max vehemently opposed the TPP – not just for corrupting environmental justice and workers’ rights. TPP is degrading to U.S. citizens – to humans – he said.

You can help flush TPP down the drain

This is where you come in, dear reader. You can help stop this global poison pill “deal” by calling or texting Congress now! Vote No on TPP! Vote No on Fast Track!

If Medicare for All had been in force, hundreds of thousands killed by COVID would be alive 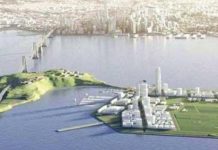 The TIDA board plunges into redevelopment, burying Yerba Buena and Treasure Islanders’ concerns: A tragedy in three parts – Part Three