On Feb. 9, 2014, prisoners in the special management unit (SMU) of the Georgia Diagnostic Correctional Prison began another hunger strike to protest conditions.

The hunger strike is in response to abusive conditions, bugs being served in food repeatedly, sexual harassment, sexual assaults, beatings by officers, being tortured by being thrown in strip cells without being fed by staff, getting very poor calories on daily trays, refusing prisoners access to law library, staff trying to poison prisoners, prisoners being threatened by staff, refusing prisoners proper medical treatment and denial of the equal protection of the laws as guaranteed, and due process of the law under the Fifth and 14th Amendments to the U.S. constitution.

On Jan. 25, 2014, the prisoners received trays at the SMU lockdown that had bugs in the food, and after the bugs were pointed out by the prisoners to staff, staff demanded that either they eat the food or don’t eat at all. Then, when the prisoners tried to keep the trays to show proof of the incident to the warden, they were further threatened by the OIC (Office of Investigations and Compliance).

The inmates had to go two days without eating just to show the warden the bugs in their food. And when the issue was finally brought to the warden’s attention, they only replied that the bugs are nothing but a little bit more meat to add to the flavor.

This is not the first time that bugs have been served in prisoners’ food. In fact, this has happened over nine times already. Nothing has been done about this issue by the staff or the kitchen stewardess despite the filing of grievances – still nothing but denials.

They were told that if they didn’t give up the trays that he was going to get his COs to suit up with their sticks and gear and gang rape the prisoners.

Additional incidents include prisoners being beaten by staff while in handcuffs and use of physical force by the staff and yet nothing has been done about these employees’ abusive actions. Instead, these incidents are being covered up by Warden Bruce Chatman, Deputy Warden June Bishop, Warden of Administration William Polnel, Capt. Michael Nopen, Lt. Michael J. Kyles, medical staff member Mary Gore and even mental health staff member Mr. Whitmore.

These prisoners are being denied their yard call, as this institution’s program contains a rule that prisoners in the E Wing are not allowed yard call, which is in violation of the Fifth and 14th amendments to the U.S. Constitution and the Georgia Bill of Rights Article I, Section 1, Paragraph 1 requiring due process of the law and equal protection of the laws, following the institution GDC SOP (Standard Operating Procedures) VE01-0004 restricted population. 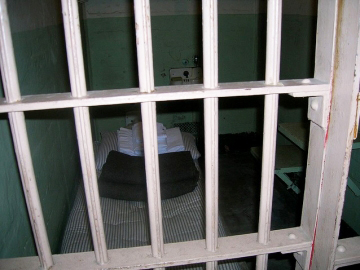 Even prisoners on death row get to have their hour a day on the yard cage. Other prisoners are allowed their yard call at this SMU prison from A, B, C, D and F wings. Some of the prisoners in E Wing have not smelled fresh air in eight months to a year.

These prisoners are also being denied their access to the law library as guaranteed by the Georgia Bill of Rights and the Fifth and 14th amendments to the U.S. Constitution, as they have a right to access to the courts and the due process of law and equal protection under the law. Currently the prisoners are only allowed a limit of two ordered cases per week to be delivered to their lockdown cells copied on paper, and in some cases, the law library staff person, Mr. Young, refuses to deliver these case copies if the cases pertain to securing inmates their freedom.

Medical staff is refusing to take serious actions on the hunger strike as required by health service regulations (GDC SOP VH47-0002). There is also evidence of the police trying to cover up medical records of weight loss and vital signs.

Some of the prisoners in E Wing have not smelled fresh air in eight months to a year.

Ultimately, there is very little that the prisoners can do to find the muscle to fight for their rights. Prisoners feel their only choice is to put their lives in danger by refusing to eat. Staff are even threatening the prisoners – that if they stay on the hunger strike, they will die under their watch and it would be no problem to cover it up.

These prisoners are pleading for some true outside support – from newspapers, world newspapers, magazines, television shows, pen pal services and any organizations.

Please contact the prisoners on strike. To write them messages of support and encouragement, use the names and Georgia Department of Corrections (GDC) numbers shown below and the address, GDCSP SMU, P.O. Box 3877, Jackson GA 30233.