A 1968 book-length report, titled “A Study of the Manpower Implications of Small Business Financing: A Survey of 149 Minority and 202 Anglo-Owned Small Businesses in Oakland, California,” was sent to the Bay View by its author, Joseph Debro, prior to his death in November 2013, and his family has kindly permitted the Bay View to publish it. The survey it’s based on was conducted by the Oakland Small Business Development Center, which Debro headed, “in cooperation with the small businessmen of Oakland, supported in part by a grant, No. 91-05-67-29, from the U.S. Department of Labor, Manpower Administration, Office of Manpower, Policy, Evaluation and Research.” Project co-directors were Jack Brown and Joseph Debro, and survey coordinator was Agustin Jimenez. The Bay View is publishing the report as a series. A prolog appeared in the December 2013 Bay View, Part 1 in the January 2014 Bay View, and this is Part 2 of the report.

All the ingredients of human bondage and denigration which characterize Anglo treatment of minority peoples in the United States are also present in Oakland, California. A study of Oakland’s socio-economic situation demonstrates, as the Kerner Report and many other similar queries have done throughout the country, that the poor are cut off dramatically from the middle and upper classes.

This segregation of white and Black and its ramifications are seen in the demographic trends, housing, education, recreation, income, public assistance, employment and criminal patterns of Oakland. 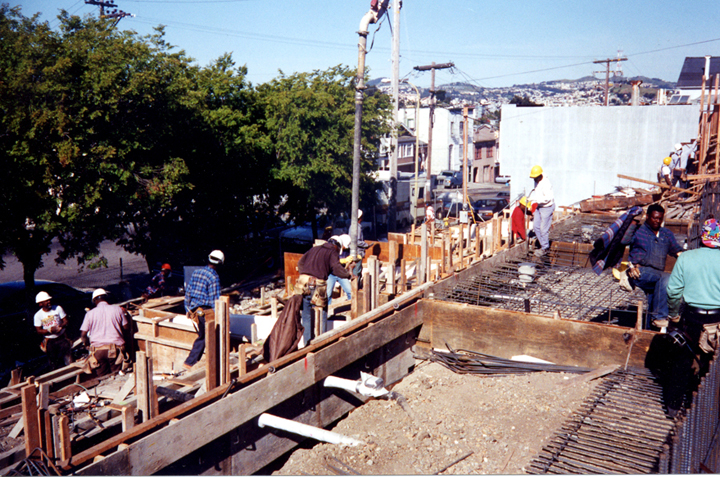 Oakland’s racial chasm is heightened by its particular geographical features: The Anglo middle class homes are located in the hill section of the city, while the ghetto is in the flatlands adjacent to San Francisco Bay. In general, each foot above sea level signifies a rung higher in the socio-economic ladder. Huge mansions dot Oakland’s tree-lined ridge and boast panoramic views of the whole Bay Area, while tenements decay in the industrial section built on fill land that was once part of the Bay.

Schools in the hill region are modern, and the local board of education prides itself for the excellence of academic facilities and achievements in the hill schools. Income levels are high among the college-trained, upwardly mobile hill residents.

The opposite is true of the flatlands, where unemployment, poor housing, poor educational facilities, poverty, dependence on public assistance and criminal arrests abound.

In almost every detail, Oakland reflects the image of social, economic and political stratification apparent in every major American city where violence has erupted over the last few years. Will Oakland not be next?

Against this mural of skyline haves and flatland have-nots, this study presents the results of a survey of 351 businesses in both socio-economic regions of Oakland. The basic findings in relation to Black and Mexican American businesses are as follows:

– entrepreneurial dependence upon a racial or ethnic market;

– the presence of a superordinate number of management problems, the most severe being that of inadequate record keeping;

– an inability to acquire sufficient capitalization due to lack of management know-how in some cases and racial or ethnic discrimination in others;

– the genesis of a psychological attitude of frustration with lending institutions in general and banks in particular;

– a heightened dependence upon finance companies and other high-interest, short-term money sources;

– smallness of operation both in terms of sales volume, earnings of proprietors and total number of employees when compared with Anglos in the same business line;

– necessity for employers to “moonlight” – or work at another job – in addition to the business;

– low wages paid minority employees in such concerns, necessitating “moonlighting” on their part as well.

By and large, these findings paint a grim picture of Black- and Mexican American-owned businesses in Oakland and, by extension, in the United States. There is, however, another side of the coin. These data indicate that:

– minority employees, particularly Blacks, tend to remain relatively longer than do Anglos with a single employer of their own racial or ethnic group;

– minority persons without many skills or high levels of education can acquire employment and can perform well on the job when there are no irrelevant or unfair aptitude or intelligence tests to pass;

– the relative stability offered a Black employee in a Black-owned shop is sometimes sufficient to change a youth’s attitudes about his economic future. Such employees seem more enthusiastic about their jobs than others employed in Anglo factories or other establishments.

There is a sound basis for the hypothesis set forth by the National Negro Business League and others that creation of a minority business class would provide for a more equitable distribution of the economic pie. Such a class might well temper the severity of the Black and Brown revolution.

In order to provide disadvantaged ghetto entrepreneurs with funds, management counseling and business training, the Oakland Small Business Development Center (OSBDC) was founded. Funded under Title IV of the Economic Opportunity Act of 1964, the OSBDC has offered its services to ghetto entrepreneurs on the basis of good character and willingness to learn rather than on collateral strength and/or a history of successful business management.

In this manner, the OSBDC assisted over a thousand minority businessmen from March 1966 until December 1967. During this same period, nearly 100 loan packages totaling over $1 million were approved by the Small Business Administration (SBA) for ghetto merchants.

Such merchants, because of their unfamiliarity with governmental forms and bureaucratic delays, soon would have despaired of any hope of federal assistance without the aid of the OSBDC. This combination of technical aid and long-term, low-interest financing enabled many fledgling ghetto enterprises to open under sheltered conditions in which every major decision during the first critical months of operation was discussed with OSBDC personnel. Existent businesses were strengthened by similar methods.

In order to provide disadvantaged ghetto entrepreneurs with funds, management counseling and business training, the Oakland Small Business Development Center (OSBDC) was founded. The OSBDC has offered its services to ghetto entrepreneurs on the basis of good character and willingness to learn rather than on collateral strength and/or a history of successful business management.

As a result of this program, over 200 jobs were created where none existed before. Only 5 percent of all OSBDC-assisted enterprises failed within the first year and a half of the center’s inception. This record compares favorably with the 50 percent failure rate observed during the first two years of operations of 82 Anglo owned small businesses in Providence, Rhode Island.

Another measure of this program’s success is the ability of ghetto entrepreneurs to repay their respective loans. It is interesting to note that an amount equal to the total value of the average loan would be returned to the government every two and a half years in the form of taxes and interest.

The average maturity of these loans is nine years. This means that in addition to the principal, all of which would be repaid at the end of this period, the government would receive about five times its investment over the term of each respective loan.

The potential of this program cannot be overstressed. It creates or bolsters a group of self-employed minority persons who might otherwise be dependent upon the state. It makes new jobs for the hard-core unemployed as these businesses expand. And, most important, it is probably the only anti-poverty program in the United States which pays for itself.

That this program merits serious consideration from Congress, the anti-poverty program, the departments of labor and commerce, and other governmental agencies is beyond question. And yet, the reverse appears to be true.

In spite of the exceptionally outstanding record of the Oakland and sister Small Business Development Centers throughout our nation, the program’s impact has been severely impaired by the priorities of the war in Vietnam and by political forces within and around the Office of Economic Opportunity, the Small Business Administration and the Congress. Like many other worthwhile anti-poverty programs, the SBDC concept and program may well be the victim of present-day circumstances and political exigencies.

In order to save this fledgling program, a most potent solution has been suggested. The OSBDC concept should become incorporated into a non-political ghetto development bank where management assistance and direct long-term, low-interest lending on the basis of character and limited collateral would take place.

Initial capitalization for this bank would derive from $2 billion in federal stocks. Administration of the bank would be in the hands of ghetto residents, with a board of directors representing the banking community, the public and private business sectors, and members of the ghetto community itself.

Such a development bank would be empowered to act as liaison in attracting labor-rich industry into the ghetto through a number of initiatives, such as the 7 percent tax write-off and inducing the municipality to provide land or building space gratis or at low cost. More important, such a bank would be able to finance minority entrepreneurs on an unprecedented, large scale, providing at the same time the mechanism whereby the public trust is safeguarded through tight management control exercised by professional advisors.

In spite of the exceptionally outstanding record of the Oakland and sister Small Business Development Centers throughout our nation, the program’s impact has been severely impaired by the priorities of the war in Vietnam and by political forces within and around the Office of Economic Opportunity, the Small Business Administration and the Congress.

Large businesses which chose to locate in the ghetto would be encouraged to organize their operation in such a way that the full potential of every employee would be utilized. Companies would be structured, for example, with a relatively large number of middle and high management levels so that some employees could achieve a high status in the firm.

This process would insure low turnover and loyalty to the company. The plan would also include a gradual phase-out of Anglo high management personnel and a phase-in of ghetto personnel within a few years after establishment of the factory.

A program such as this would create a class of minority entrepreneurs unparalleled in American history. It would provide an avenue of socio-economic mobility where none previously existed. It would provide a meaningful alternative to violent revolution for a generation of disenchanted slum dwellers.

Reviewing the socio-economic picture as we have presented it, it is evident that unless vast changes occur in attitudes regarding the economic role of Negroes and Mexican Americans, Oakland will erupt with the same destructive force as have other cities throughout the nation.