by SSU Freedom From Fees

Please sign our petition in support of students and their families, and pledge to boycott future donations to Sonoma State University if the fee is not rescinded.* 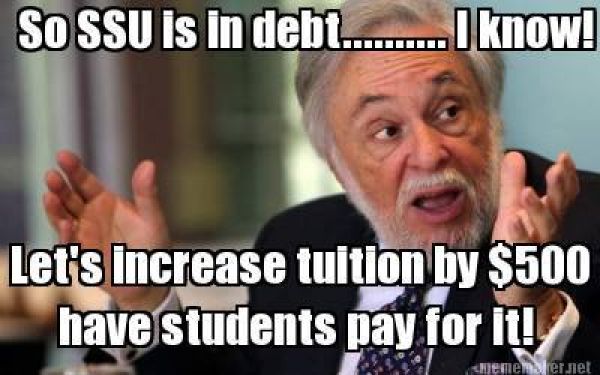 Sonoma State University (SSU) President Ruben Armiñana is preparing to announce the imposition of a $500 annual fee increase for all students in the fall of 2014. The proposed increase is called a “Success Fee” and would supposedly be used for more classes.

The timing of the fee announcement comes just days after the ending of a registration crisis where many hundreds of students could not get the classes they need for graduation. Before 2011, fee increases required a campus-wide student vote. The CSU trustees now allow campus presidents to impose fees with campus consultation only. In 1996, students at SSU voted down a proposed $300 fee increase by a two thirds margin.

Sonoma State University (SSU) receives more than enough money from the state of California to provide classes for all students to graduate in a timely manner. However, the money has been mismanaged by the president through a bloated administration, the diversion of campus resources to the management of the Green Music Center and failure to use money from campus profit making enterprises to support classroom instruction.

Hundreds of SSU students will be forced to quit college if fees are raised by $500, and thousands are unsure if they could continue. In a survey of 300 students on campus in November of 2013 (90 percent confidence level for 9,120 students), 8 percent answered “no” when asked if they could continue next year if fees were raised by $500 and 33 percent answered “unsure.” This survey is consistent with a survey completed in April of 2011.

SSU students graduate with the second highest amount of student loan debt in the CSU system. Sixty-two percent of graduating SSU seniors in 2012 owed an average of $21,206. A $500 a year increase would add $2,000 or more to student debt, making SSU the most debt burdened campus in the CSU system.

SSU has a bloated administrative structure with the highest manager to student ratio in the CSU system and twice as many managers as similar size campuses. However, SSU professors are the lowest paid on average in the entire CSU system.

SSU’s development office raises money primarily for buildings and the Green Music Center and not classroom instruction. SSU spends 76 percent of its donor gift disbursement distribution on buildings and other projects and only 18 percent on instructional programs. SSU’s ratio is the exact opposite of all other CSU campuses where the average donor gift disbursement to instructional programs is 63 percent.

SSU debts for construction exceed CSU standards. CSU Executive Order 944 requires the campus CFO to annually review the debt service coverage ratio (DSCR). As of June 2010, SSU’s DSCR was 1.4, which is greater than the state mandated DSCR limit of 1.35.

Analysis: It is important to note that individual CSU campuses have internal flexibility in choosing to prioritize spending. The SSU administration has consistently during the past 22 years demonstrated that academics are not the primary mission at SSU. This is why SSU has disproportionate administrative costs and the highest fees in the CSU, when most all other campuses prioritize campus resources for academics. It is also the reason why in 2007 faculty voted no confidence in President Armiñana. It is absolutely wrong to let the SSU administration get away with forcing students and their families to bail out their administrative mismanagement.

*Note: Our intent with a donations boycott is to put pressure in the SSU campus administration and the CSU trustees. Such a boycott could spread to other campuses if successful at SSU. However, our intent is not to boycott donations to instructional programs and activities earmarked specifically for student education as athletics, individual departments, Holocaust Studies Center and other academic specific units. However, it is important that donors for such activities monitor the distribution of their monies as the campus administration is noted for the diversion of development funds for administrative activities.

Support for the factual statements above is available on line at the following URLs:

May 2007, 73.4 percent of SSU faculty vote no confidence in President Arminana’s leadership. http://ssufacultyforqualityeducation.org/ssu-faculty-vote-no-confidence-in-president-ruben-arminana/

The Financialization of Education and Sonoma State University http://ssufacultyforqualityeducation.org/the-financialization-of-education-and-sonoma-state-university-part-iii/

Interviews of 16 department chairs at Sonoma State University during the spring 2012 semester indicate that over the past 15 years there has been an overall decline in the quality of education. http://ssufacultyforqualityeducation.org/the-opportunity-costs-of-the-sonoma-state-universitypercentE2percent80percent99s-green-music-center/

Occupied Sonoma State University: No Billionaire Left Behind and the sordid tale of the financialization and corporatization of one California State University http://ssufacultyforqualityeducation.org/occupied-sonoma-state-university-no-billionaire-left-behind-and-the-sordid-tale-of-the-financialization-and-corporatization-of-one-california-state-university/

Summary from Senate Budget Report for 2005/06 In 2005/06 the schools received less money (by 1 percent) than they did in 2001/02 at a time that the total sent to campus increased by 16 percent! http://ssufacultyforqualityeducation.org/the-arminana-years/