by Tiny, aka Lisa Gray-Garcia, daughter of Dee, mama of Tiburcio

On Wednesday, Feb. 5, citing California Penal Code Section 368, we, the evicted, gentrified, policed, elderly and disabled, walked into the Hall of Justice in San Francisco to bring criminal charges of elder abuse against landlords for the perpetration of the crime of Ellis Act evictions against frail, elder, disabled and traumatized residents of San Francisco. 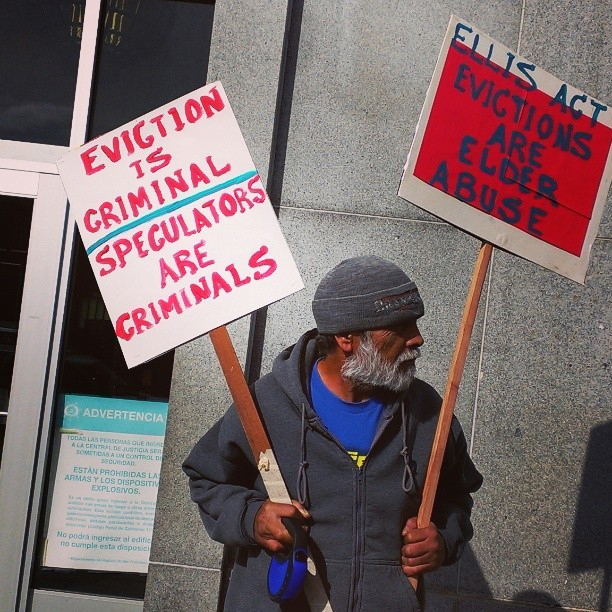 “Becoming homeless as an already disabled senior almost killed me,” said Kathy Galvez, African Descendent elder evicted in 2012 from her San Francisco home of 40 years so a realtor and bank gangster could make profit on her now stolen home.

Due to the predatory speculation of landlords like Urban Green and lawyers like Andrew Sacks trying to scramble to make profit from the huge influx of new tech employees flooding the Bay Area, thousands of families with young children and disabled elders have been served with Ellis Act eviction notices, or have already been evicted, ending up in the streets, in shelters or, most terrifying of all, dead from the trauma of eviction and homelessness.

The Ellis Act is a state law which says that landlords have the unconditional right to evict tenants to “go out of business.” This landlord-written law has been used to enable speculators to buy apartment buildings filled with long-term tenants and “legally evict” all the tenants living there so that after a short wait, they can re-rent all the vacant units for any insane price they want.

‘I have nowhere to go’

Pictures of Black Herstory filled every inch of Miss Nan’s walls. Mamas, daughters, sons, uncles, aunties, grandmamas and great-greats looked down at me as Miss Nan spoke: “This whole eviction process has made me extremely ill. I was already sick, but I’m not sure if I’m going to make it now.”

The voice of 75-year-old Miss Nan was shaking as she spoke about the Ellis Act eviction notice she and her neighbors had just received, which would mean she, an African-American disabled elder and life-long resident of San Francisco, will be evicted from her home of 43 years. “I have nowhere to go, and I can hardly walk. And now they are sending people out here to harass me,” she concluded.

Me and POOR Magazine’s co-editor and Manilatown son Tony Robles were there, sitting in her humble living room with Judge Judy quietly adjudicating on the old school Panasonic in the background, trying desperately to “save” Miss Nan from the vicious crime of eviction for profit.

As Miss Nan spoke, telling her story and the stories of her two disabled neighbors, one of whom had just been rushed to the hospital because he was so traumatized by receiving an Ellis Act eviction notice, her voice remained deep and strong, holding back over 50 years of rent and bills paid, jobs tirelessly labored, unions joined, children born, families raised, elders cared for, mamas transitioned. “I have nowhere to go,” she repeated.

After holding the disgusting crime of Miss Nan’s eviction on my heart, I was thrown back to the trauma of nine years ago, when me and my mama were given an Ellis Act eviction notice – the last straw, she said, after an already too long life of poverty and suffering, and the reason she became very sick and soon after transitioned.

Thousands of families with young children and disabled elders have been served with Ellis Act eviction notices, or have already been evicted, ending up in the streets, in shelters or, most terrifying of all, dead from the trauma of eviction and homelessness.

I remembered the family of Gerry Ambrose, a four generation working-class family dismantled by Ellis Act eviction and eventual displacement to a trailer park in West Sacramento from the predatory impact of the first dot-com boom, my own eviction in 2010 under Ellis Act of Mamahouse, a home for poor single parents like myself that I started in 2007.

And now Miss Nan, Benito Santiago, the entire block just Ellis Acted last month in North Beach, dozens more we at POOR Magazine have gotten calls from every week for the last eight months and literally thousands more across the state of California, being evicted for profit of the few and the suffering of so many.

As a caregiver for elders, an advocate for all poor peoples who like myself and my family have struggled to survive in the inhuman system they call capitalism, and a good indigenous daughter who has always practiced eldership, I realized then that these evictions under the Ellis Act, used for the profit of a few and causing the suffering of so many, were an actual crime, a crime of elder abuse.

“We need to put an end to the Ellis Act and other laws like it which cause more poverty and homelessness,” said Luis Rodriguez, candidate for governor of California, who spoke at the press conference that preceded the filing.

“I’m sorry, we can’t take this complaint. You will need to go downstairs to the police window.” When we first presented the detailed complaints of 12 disabled elders ranging in age from 62 to 95 years old, whose lives have been dismantled by the abuse of an Ellis Act eviction, the DA tried to give us what us po’ folks call the “welfare shuffle”; i.e, sorry we can’t help you, you need to go somewhere else.

But this time, for one of the few times in our unprotected and system-abused lives, someone stood up for our fight for the most unprotected in our society.

“Actually, no, this is the right place for us to be. Due to the enormity and seriousness of these charges, they have the right to go directly to the District Attorney,” said Tony Prince, revolutionary lawyer who showed up for us and is also acting as Luis Rodriguez’ campaign manager in his run for governor of California.

And then suddenly, almost as quickly as the “no” came out of her mouth, the DA’s representative agreed to go to the back and consult with other attorneys. When she came back, she agreed to take our first seven complaints and make an appointment to sit down with us to discuss investigating them further.

Her “no” was not unexpected for us. Us poor and profiled folks of color have been told “no” more than we would care to count. Our lives and the lives of our young Black and Brown people are constantly arrested, cited, incarcerated and harassed for less than what these landlords and speculators have gotten away with.

We are constantly called criminals and thugs and perpetrators and dangerous. And yet, who among us is abusing the most vulnerable of us, who among us are creating sit-lie, stop and frisk and gang injunction laws daily to keep our poor bodies constantly under threat and attack.

“We will be investigating any clear acts of elder abuse,” said George Gascon to reporters who questioned him on our complaints.

“We need to put an end to the Ellis Act and other laws like it which cause more poverty and homelessness,” said Luis Rodriguez, candidate for governor of California, who spoke at the press conference that preceded the filing.

It is the people who have stolen this indigenous land and charged us rent for it and use papers and lawyers to destroy us who are the real criminals, the dangerous ones. They are the ones we need to watch out for – the ones who need to be cleaned off our streets and out of our neighborhoods before they abuse any more of us.

This Friday, Feb. 14, at 12 noon, elders, families and advocates come back to 850 Bryant St. in San Francisco to hold a press conference on the front steps of the Hall of Justice and then meet with the district attorney to pursue these criminal charges of elder abuse. Come join us.