COME WALK WITH ME – south, across the busy intersection of Third and Williams to Carroll. FINALLY, A COMMUNITY DREAM REALIZED! Groundbreaking Ceremony, Saturday morning, March 1, kicked off the long anticipated building of the NEW DR. GEORGE W. DAVIS Senior Center and Housing to be completed by 2015. The sight and sounds of trucks hauling material, tractors, drilling; voices of workers can be heard behind the 5800 Third Street Condo apartments. Sounds of PROGRESS – JOBS! JOBS!

Mrs. CATHY DAVIS, director, Adult Day Health Care Center and Bayview Hunters Point Multipurpose Senior Services, proudly showing off beams of happiness, to finally get the ball rolling! It’d been years of struggle before and since her husband’s death, March 8, 2010; she’s carried the baton to keep his dream to provide housing for seniors. March 1 was a red letter day in the Bayview!

The closing of Fresh ‘n’ Easy Neighborhood Market last fall left a huge void in the area that affected residents also at 5600 Armstrong Senior Apartments – loneliness – no foot traffic; so some good news was needed to boost the area; hopefully, a top supermarket will be in place to sell nutritious fresh produce. Currently only stores to serve the Bayview area are FOODSCO on Williams and SUPER SAVE Market on Third and McKinnon. For many years, the Bayview had been a FOOD DESERT, void of a major market. Fresh ‘n Easy offered some hope – many devastated when they closed shop, left the community dry! 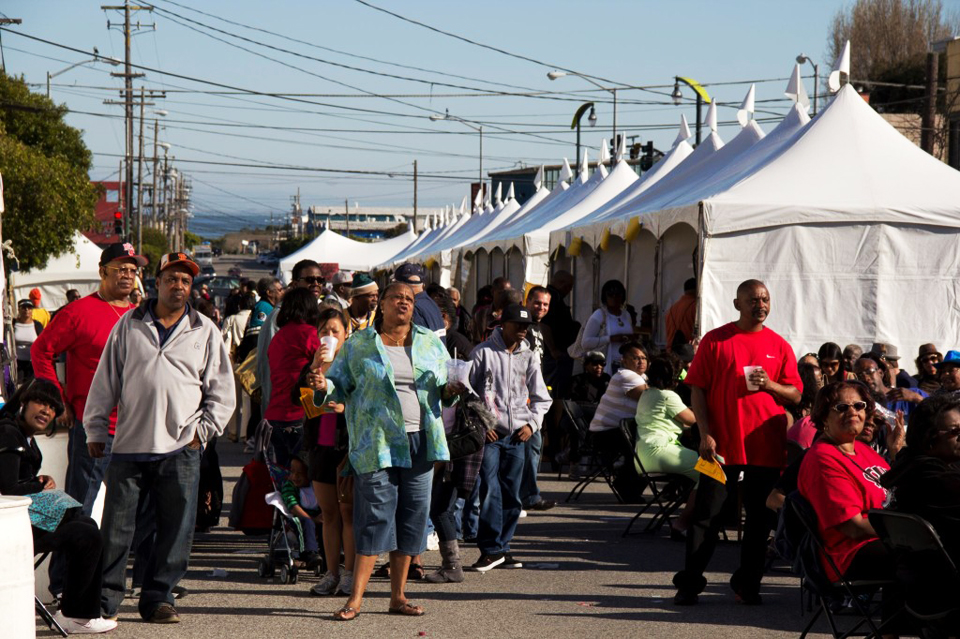 The annual BLACK CUISINE follows the groundbreaking on Yosemite. This column was written before the festival, and the BAY VIEW is already on the street! BUT, I can say in advance, the festival is always a lot of fun, down home cooking and LIVE music! I always look for some CHITLINS’. Remember sitting down with WILLIE B. KENNEDY at a table in the Kente kitchen. The MONTE CARLO club will be missed, for in previous years, many gathered in the bar after browsing the closed off street; later that evening MONTE CARLO KING DON JUAN celebrated his birthday there !

MOVING ON – 3-STREET’S own MISS APRIL was in the spotlight one Saturday afternoon during Black History Month at MACY’S Union Square, starring in the Cellar Kitchen. Chef April demonstrated and served the soulful vittles that one can taste at AUNTIE APRIL’S restaurant; HEY, another lady showing out – MS. HINES – owner YVONNE’S Southern Sweets on Third – FAT TUESDAY, 12-4 p.m., will serve coffee and BEIGNETS at her shoppe – now I’m excited about that!

CHECK IT OUT – MARDI GRAS SAN FRANCISCO STYLE – FAT TUESDAY on the Fillmore, Saturday, March 4, 5-11 p.m. from Sutter to Turk; many venues will participate.

BACK on Third – STOPPED into FRISCO FRIED on a recent Friday afternoon, starving for some fried fish. The Seafood Sampler – oysters, garlic crab, shrimps and catfish – downright good! The place was crowded – San Francisco City College Trustee ANITA GRIER in the mix; SHOUT OUT TO “LETS EAT BARBECUE and More,” next door to Yvonne’s Sweet Shop, invited by Evangelist BOB WADE of WARRIORS for Christ Outreach Ministries, San Francisco, to join he and his mom, MISS BILLIE, as she’s affectionately called, for barbecue dinner – BOY, did we enjoy a finger-lickin’ meal – collard greens, yams and more. The three of us left the place HAPPY! Thank you, BROTHER WARD!

HEY, FELLOWS, want to take your lady, or significant other, out for a FANCY evening, dressed to IMPRESS? Well, EVERY Sunday join the elite RHYTHM AND BLUES CLUB members over at the VERDE CLUB, 2424 Mariposa St., off Potrero, starting at 5 p.m.; dance to the swinging sounds of DJ extraordinaire BOB GRAHAM; occasionally a LIVE BAND will turn you on!

CHECK IT OUT – MARDI GRAS SAN FRANCISCO STYLE – FAT TUESDAY on the Fillmore, Saturday, March 4, 5-11 p.m. from Sutter to Turk; many venues will participate.

LET’S PLAY BASEBALL – San Francisco GIANTS AND Oakland A’S KICK OFF THEIR 2014 BASEBALL SEASON EXHIBITION GAME March 27 at AT&T Park. BARRY BONDS is working with the Giants as a hitting coach during Spring Training in Arizona. OK, FELLOWS, let’s see what you got!