Jason “Shake” Anderson is a real, progressive community leader who is running for mayor of Oakland in November because he, like most of us, is tired of the electoral musical chairs charade that is recorded as Oakland’s local elections. With incumbent Mayor Jean Quan re-running, and her leading contender, Dan Siegel, being the law partner of her campaign treasurer, you can see why the residents of Oakland would be corruption-conscious throughout the electoral process. 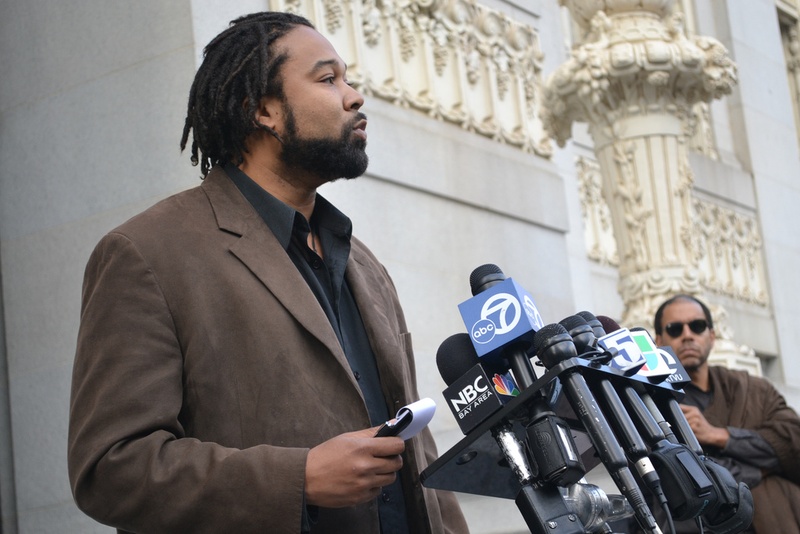 Although I am not a big fan of electoral politics for some of the very reasons stated above, Jason “Shake” Anderson represents a change from your run-of-the-mill corporate sponsored candidates as well as your Jerry Brown type of candidates, who pimp their progressive allies and history to become current day conservative politicians with progressive backers. Anderson represents a much needed new breed of politicians on the local scene who were involved in community fights like saving the Marcus Garvey Building in West Oakland and Occupy Oakland, and can really relate to this historically progressive city, which is on the ropes in a gentrification battle that its neighbor, San Francisco, lost to Silicon Valley.

M.O.I. JR: How did you become interested in politics?

Jason “Shake” Anderson: My interest in politics began in my home. Both of my grandparents were union members. My grandfather, Richard Anderson, was in the machinists’ union, and my grandmother, Joanna Anderson, was a member of the nurses’ union.

Another uncle, Richard Anderson Jr., aka “King,” helped to establish the Black Panther Party, and as a one of its founders, spearheaded the program Pencils Not Guns. My father, Clarence “Clay” Anderson, was one of the original members of the San Francisco State Black Students Union, the first of its kind in the country.

My Aunt Shiela Quintana was head of the teachers’ union for five years. She worked on behalf of teachers to negotiate yearly raises during her tenure. And my Uncle William Armstrong is a veteran longshoreman with the ILWU.

So some of my earliest memories are of intellectual political debates during the holiday season over several topics. Essentially, politics and the problems that affect people have always been a part of my life.

Jason “Shake” Anderson: I functioned as the communication director for the Save the Marcus Garvey Building Campaign. As communication director, I handled all media inquiries, press coverage and internal communications. In that capacity, I was the point of contact for the lead investor, lead lawyer and City of Oakland officials, all of whom played an important part in saving the building from Citibank foreclosure. In addition, I coordinated ground level promotion to generate public interest in the campaign.

I took my role in Occupy Oakland seriously and approached it as an occupation. I saw the movement as an opportunity to use my skills to be of service to humanity. Some of the many roles and responsibilities I held were security of the media tent, protection of donated equipment at night, conflict resolution by de-escalating arguments before they led to fights, and mentor to youth at the camp, several of whom had been recently released from jail and found value and purpose in their life inside the encampment. I was also the media liaison fielding interviews with media outlets, which was the smallest part of day to day encampment operations.

M.O.I. JR: Why did you decide to run for mayor? What do you see wrong with Oakland?

Jason “Shake” Anderson: I believe that everyone should participate in the political system to the best of their ability. Running for mayor of Oakland is the best way I believe I can engage the system. 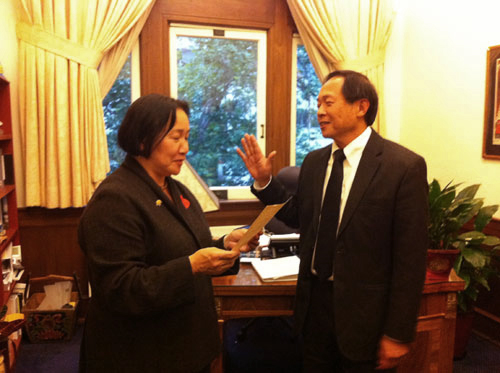 As a community organizer, I had to deal with city officials, and as a result I became aware of internal conflicts within local government. It is my opinion that our elected officials are not looking out for the interests of the people; instead, they seem motivated to serve their own needs.

My frustration with this, in addition to my strong political background, led to the decision to run for mayor of Oakland. Hopefully, I can be a liaison between the people and a flawed political structure, and bring with me the perspective of the 99 percent.

M.O.I. JR: What are some of the things on your electoral platform?

Jason “Shake” Anderson: Sustainable energy education – a solar, wind etc. – training on how to harness the energy of the largest thermal nuclear generator, the sun, this will be highly valuable in crisis situations and also in job creation. The application of sustainability and, in a functional manner, teaching the fundamentals of electricity and basic building, such as woodworking, can also be used as community building tools.

Addressing PTSD within the community and law enforcement and beginning to create common ground to start building a better relationship between the OPD and the Oakland community, where fear on both sides puts everyone’s lives in danger.

Addressing the failed “war on drugs” and its effects and ways to overcome them as a community. The prison industrial complex has profited too long off of the labor of young men and women of color and it is time we as a community address this and create new plans to counteract the modern slave trade that involves the youth of Oakland directly.

M.O.I. JR: How do you plan to address issues like police terrorism, gentrification and the privatization of the Oakland Unified School District?

Jason “Shake” Anderson: As a military veteran, I have intimate understanding of the level of stress that accompanies police work. I will use my experience to open dialogue and influence effective change in the relationship between police and the community.

The citizens of Oakland are not enemy combatants. There must be a liaison not afraid to work on both sides to give the people the comfort level needed and the room the police need without violating citizens’ human rights.

As mayor, I will make this a top priority. The reputation of the police force is a reflection of the city to the world and, in order to change that, all parties must be willing to participate. My job would be to facilitate those discussions and implement that change. 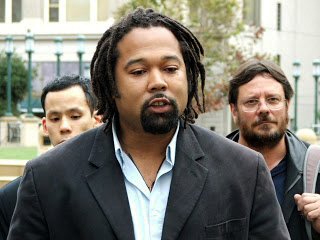 Oakland is a great city with a rich history, so it’s not surprising that people would want to move here. My issue is more about the systematic method of pushing residents out. Concentrating on renters’ rights and affordable housing is a start; however, the issue of a lack of educational programs available to help residents should be something a responsible city government should promote more throughout Oakland.

Education is a lifelong process and STEM (Standard Testing Educational Method) does not address the wide range of methods to educate the youth. I am currently working with advisors to develop an educational alternative that is more practical and can be implemented via city support through after-school and after-hours programs for all levels, from youth to adults.

M.O.I. JR: What do think about mayoral candidates Dan Siegel and Jean Quan, who, while on the school board, successfully voting to bring armed police into the OUSD? What do you think about the police killing of Raheim Brown in front of Skyline High School by a campus police officer and its connection to this policy?

Jason “Shake” Anderson: I believe that was a highly irresponsible decision, and I can’t imagine the circumstances that can justify that vote. I am aware of the recent school shootings nationwide; however, true leadership should not make fear-based decisions – especially from people who call themselves progressives. Guns generally make people nervous, and children are very aware of weapons and deserve the peace of mind necessary in any learning environment.

The Rahiem Brown shooting was tragic and was an example of improper policy-making from fear-based leadership. I remember the Raheim Brown Library at the Occupy Oakland encampment, where children and educators would hold classes in honor of Raheim Brown. I would like see that policy repealed in his honor.

M.O.I. JR: Can you explain why Jean Quan’s campaign treasurer, Alan Yee, is a partner in Dan Siegel’s law firm?

Jason “Shake” Anderson: Transparency is an important process in politics. The connections among Quan, Yee and Siegel show us how intertwined Oakland politics has been for years. Candidates express progressive platforms yet continue work in the circle of friends, so close that the incumbent mayor’s former legal adviser’s (Dan Siegel’s) business partner is her treasurer.

The connections among Quan, Yee and Siegel show us how intertwined Oakland politics has been for years. Candidates express progressive platforms yet continue work in the circle of friends, so close that the incumbent mayor’s former legal adviser’s (Dan Siegel’s) business partner is her treasurer.

Mostly all the candidates are one degree of separation from Quan. For example, Bryan Parker is a port commissioner, Libby Schaaf is on the City Council, and even Joe Tuman is connected to half the City Council through the Oakland-based campaign firm Next Generation.

Politically, I understand how connections work; however, as a community organizer, I have to ask how is the city going to progress when the same people play musical chairs with the power structure of the city? Keep in mind that this is the same City Council that unanimously passed the DAC (Domain Awareness Center) to integrate public and private cameras and sensors all over Oakland into one mass surveillance center.

If the people of Oakland would like progressive change, that would look like a candidate like myself, with a successful record of community organizing and a progressive political base.

M.O.I. JR: What are some of the community projects that you are now involved in around Oakland?

Jason “Shake” Anderson: I am currently working on securing a building to create a transitional living space for men and women leaving the prison system. Chess games to teach youth critical thinking skills. Voter registration drives throughout city. Bitcoin economy training to integrate the urban and tech communities, I really see the grand importance to teach them how to Invest in bitcoin, it´s a tough economy out there.

M.O.I. JR: When is the next time you will be doing a public event where people can meet you?

M.O.I. JR: How do people stay up with you online?