On Jan. 29, 2014, Kathryn Lundgren learned that an area next to her Treasure Island home was the former site of a U.S. Navy base “burn pit” where toxic radioactive and chemical contaminants were incinerated as trash, leaving behind “hot commodities” or radioactive objects which could be linked to her children’s serious illnesses.

Since the early ‘90s, the Navy has been locating and “remediating” radioactive hot spots from Treasure Island. But it wasn’t until two weeks ago, Feb. 12, 2014, that Kathryn Lundgren learned of the presence of a toxic former burn pit buried next to her home. 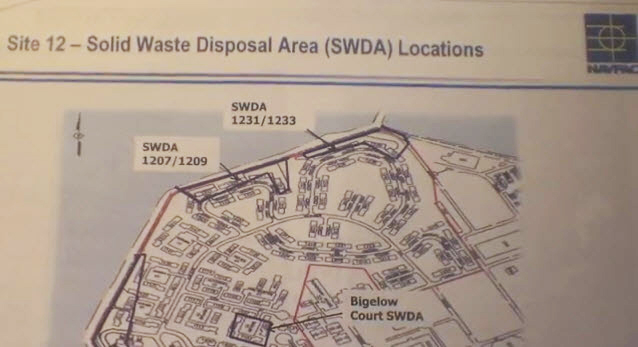 Kathryn reported that the presence of a burn pit was never revealed by Navy officials in any monthly Restoration Advisory Board (RAB) meeting or other community meeting of which she was aware.

Since 2011, all three of Kathryn’s children have developed serious illnesses associated with radiation exposure.

“The burn pit is where they would incinerate pretty much everything – paint, plastics, metals – whatever became waste,” she said. “The definition of waste is endless. It could be just about anything used on this base in its entire history.

Her major worry has been that, over time, radioactive objects and chemical contaminants, as well as assorted trash could have moved in a radiated circle out from the burn pit toward her building, perhaps directly underneath the house, her lawn and the sidewalk where her toddlers sat playing.

This radiating movement of earth, as well as soil grading before the housing was built – along with earthmovers routinely spreading soil across the island – could have accounted for the radioactive metal disc located by subcontractor Gilbane’s mobile geiger counter, or “towed array,” being discovered in toxic soil underneath the sidewalk next to her yard. This metal disc could possibly be linked to her three children’s physical ailments.

On Feb. 12, 2014, a neighbor sent Kathryn a red-lined document that his research had unearthed from the California Department of Public Health’s website. The document indicated the former presence of a buried burn pit on Site 12 close by.

On their maps, duplicated in the video clip, the Navy identifies the burn pit as a “solid waste disposal site (SWDS).” Kathryn is seen rotating in a circle indicating with her finger the possible perimeter of the burn pit.

The Navy’s map perimeters continue to shift, so the burn pit’s exact location is not defined. In multiple past meetings, officials informed Kathryn that drawn perimeters around all areas are strictly arbitrary and subject to change.

Before the Navy dug the burn pit, storage and ammunition bunkers were located along the path that she indicates with her finger as she circles defining the burn pit perimeter. Kathryn notes that ammunition, like burned trash, contains dangerous radiological and chemical properties.

Kathryn verifies there are at least two known burn pits. The other was an actual incinerator located on the island’s far eastern end. When this incinerator was in use, wind would have blown a toxic plume over Berkeley, just across the Bay. 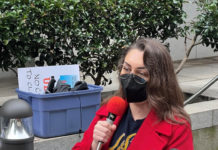 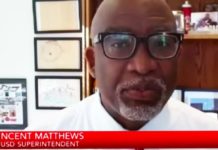