The barren landscape which our ancestors traversed as enslaved people in various reincarnations – from the Antebellum era to Jim Crow – is ground zero for beautiful Black radicalism and truth-telling. From Fannie Lou Hamer to Medgar Evers, the resilience, brilliance, passion and determination of Mississippi’s revolutionaries have served as a collective blueprint for freedom fighters following in their footsteps. And into their vast legacies steps Chokwe Antar Lumumba, son of late, legendary human rights attorney Chokwe Lumumba.

When Chokwe Lumumba died on Feb. 25, less than nine months after being elected the mayor of Jackson, Miss., a brief moment of panic and confusion engulfed the Magnolia State’s capital city. Who would unapologetically work to dismantle White supremacy in a city full of good ol’ boys for whom politics is just a means to maintain racial and economic disparities which cripple the majority Black city?

Who would ensure that the goals of the Malcolm X Grassroots Movement (MXGM), the New Afrikan People’s Organization (NAPO) and the Jackson People’s Assembly – to promote self-determination, cooperative economics, participatory democracy and social equity – would be realized?

And, then, the rain came.

In African lore, rain means good fortune. So when Chokwe Antar Lumumba announced that he was running to fill his father’s mayoral seat on a rainy day in March, it was reassurance that The People’s Movement would forge ahead. At just 31 years old, and still grieving for his father who had died just two weeks before, Chokwe Antar strapped a city, a people, The People, on his back and vowed to fight for the progress set into motion by Chokwe Lumumba and MXGM.

“We must continue moving Jackson forward on the upward trajectory that it has experienced the last seven months. We must continue that vision and that movement. What we do know from scripture is that Moses led the children of Israel through the wilderness, but it was Joshua that led them to the Promised Land. Jackson has a Promised Land and we will get there together.”

From the moment that Chokwe Antar announced his candidacy, there was a desperate sprint to stop the flow of power from City Hall to the people of Jackson. Bigots questioned his religion and purposely mangled the pronunciation of his name, just as they did to his father.

The city caved to pressure from “concerned” residents and painted over a mural created to honor the late Chokwe Lumumba. His mantra, The People’s rallying cry of “One City, One Aim, One Destiny,” was erased, allegedly out of fear that it would tilt the election in his son’s favor. But it clearly was intended to send a message that Jackson would be back to business as usual after a short detour into progressivism.

That message, however, was received and just as swiftly discarded.

The late Mayor Lumumba was dedicated to Black liberation and, as such, did not place his faith or the lives of Black people in the hands of a political system designed to keep us in chattel slavery. When he was asked during an interview, why, then, did he run for office, his answer was clear:

“We didn’t want to give credence to an oppressive system … But we’re in a city that’s 85 percent Black, in a county that’s 70 percent Black, and in a region where 17 of the 18 counties are predominantly Black.

“So we adjusted our strategy to account for the fact that people with whom we are organizing in good faith, to fight against the conditions that they are experiencing, should be entitled to put people in office and expect them to do what they wanted them to do.”

In the Jackson-Kush Plan, MXGM focuses on “building and exercising … dual power” – building autonomous power outside of the realm of the state (i.e. the government) in the form of People’s Assemblies and engaging electoral politics on a limited scale with the express intent of building radical voting blocks and electing candidates drawn from the ranks of the Assemblies themselves.”

And though Chokwe Antar lost the mayoral election to former Councilman Tony Yarber in a close run-off on April 22, he understands, just as his father before him, that one battle does not decide the war. Addressing his supporters, he encouraged and empowered them in the face of what many viewed as a crushing defeat:

And though Chokwe Antar lost the mayoral election to former Councilman Tony Yarber in a close run-off on April 22, he understands, just as his father before him, that one battle does not decide the war.

“A great man once said, ‘Our movement is not measured by the size of the crowd … but by the size of our revolutionary hearts.’ That man’s name is Chokwe Lumumba. Tonight, I stand proudly with each of you. I stand proudly knowing that we fought this battle with integrity, compassion, selflessness, hope and, most of all, love … love for our great city and its great citizens.

“We were told by many that we were too young, too inexperienced, too progressive for City Hall. Perhaps … but not for the City of Jackson. I’d submit to you that the only thing we are too young or too progressive for is believing that our work stops with the vote … It most certainly does not. Our goal is to work to make Jackson rise for all of our citizens, not just some.

“With that being said, the people’s mission continues … It continues and it does not stop for us. We look forward to working with Mayor Elect Yarber and to ensuring that the people are involved in the process. We have much work to do and together we will get it done. Free the land! FREE the land! FREE the land! For the work we do for the people did not stop today. We will continue to rise as a city together. I love you and I thank you. Jackson rises. Together we rise!” 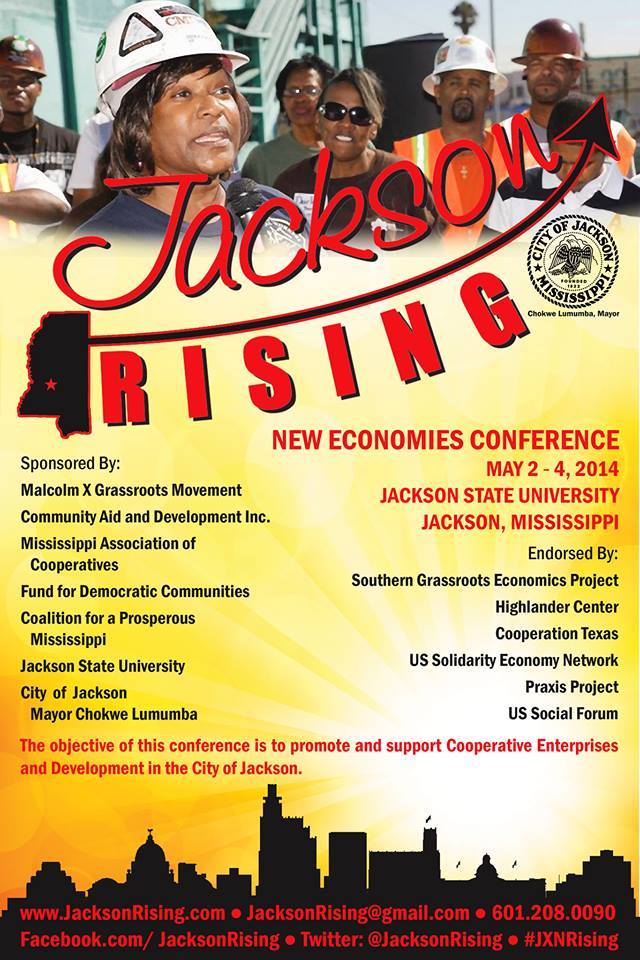 To that end, The Jackson Rising: New Economies Conference, the manifested vision of the late Mayor Lumumba, will still take place in Jackson from May 2-4. The three-day conference will educate and engage citizens around cooperative entrepreneurship, credit unions and other self-sustaining community development initiatives.

In other words, the fight continues by any means necessary.

“Everyone in Jackson, Miss., keep your head up. I know all too well the feeling of defeat and loss. First grieve it; you worked too hard not to. Second, remember that voting is a tactic; voting does not start movements. Therefore an electoral political loss does not end movements. Lastly, it’s time for new visions, new ways of thinking and doing. We won’t win every battle, but every day we wake up we can battle something. Palante!”

Mayor Lumumba’s election was a revolutionary act by the citizens of Jackson, and that momentum will continue to build through his son, Chokwe Antar. Energy does not die, it transfers to all who are open to receive it and The People are ready for change on a scale that the Deep South has not yet seen.

A month and a half before his assassination in 1964, Malcolm X, whose warrior’s spirit envelopes the movement in Jackson, said to Mississippi students in part:

“(W)e here in the Organization of Afro-American Unity are with the struggle in Mississippi 1,000 percent … We’re tired of this old runaround that our people have been given in this country. For a long time they accused me of not getting involved in politics. They should’ve been glad I didn’t get involved in politics, because anything I get in, I’m in it all the way.”

If one thing is certain, Chokwe Antar Lumumba, MXGM and The People are “in it all the way.”

Jackson, Mississippi, is rising. And there is nothing that anyone can do to stop it.

Kirsten West Savali is contributing editor at Newsone.com and blogger at Huffington Post.com. Her provocative topics explore the intersectionality of race, religion, gender, politics and culture. Kirsten’s feature articles also appear on Clutch Magazine.com, VibeVixen.com, TheRoot.com, TheGrio.com, Alternet.org and many others. Follow her on Twitter: @KWestSavali. This story first appeared in Ebony magazine.