The fall of apartheid in South Africa in 1994 was a watershed victory. It culminated decades of struggle by the Black and Colored South African masses, a struggle supported by millions in the U.S. and around the world. The victory brought to power the Tripartite Alliance government of the African National Congress (ANC), the South African Communist Party (SACP) and the Congress of South African Trade Unions (COSATU).

Now, two decades later, the ANC-led Tripartite government represents big business’ interests – especially the interests of U.S. and European-based banks and corporations. This has led the government to brutally attack workers who fight back against austerity. Indeed, in 2012, at the Marikana mine, this government massacred 34 striking miners at the behest of the mine owners.

But in South Africa, there’s an exciting new development: For the first time since the fall of Apartheid, there’s a serious challenge to the Tripartite government’s rule, and it comes from the largest and most militant union in Africa. The National Union of Metalworkers of South Africa (NUMSA) has broken with the COSATU leadership and called for South Africans not to support the ANC in this year’s elections. It is currently building a workers’ party and united front to lead the struggle against the capitalist onslaught of deregulation, privatization and strike breaking.

We are privileged to present Brother Mphumzi Maqungo, the national treasurer of NUMSA and past chair of NUMSA’s autoworker shop steward network, to discuss these developments.

For updates or to get involved in building for these events, contact the May Day Committee in Solidarity with South African Workers at twsc@transportworkers.org. Reach us directly at 510-325-8664 or 415-282-1908.

Greetings on May Day from Mumia Abu-Jamal to the National Union of Metal Workers of South Africa, brought to the Bay by the ILWU and Transport Workers Solidarity Committee

Sisters and brothers of the International Longshoremen and Warehouse Union and of your guests, the National Union of Metal Workers of South Africa (NUMSA), I greet you all as militant, historic labor unions who have in the past, the present and I’m sure in the future, continue the noble struggle for the working class in both countries.

As I write these words, I’m mindful of the horrors brought to us by the unholy alliance between capital and the state exhibited in all its ugliness in the Marikana massacre of Aug. 16, 2012.

NUMSA has rightly called this event a turning point in history, which finds its shameful echoes in the Sharpeville massacre of anti-apartheid protesters 1960 and the Soweto massacre of school children in 1976. There, school kids took to the streets in protest of new rules forcing the teaching of Afrikaans, the language of white, Dutch descendant settlers in South Africa to Black students. They knew that such a language would be of little use anywhere else in the world other than South Africa. 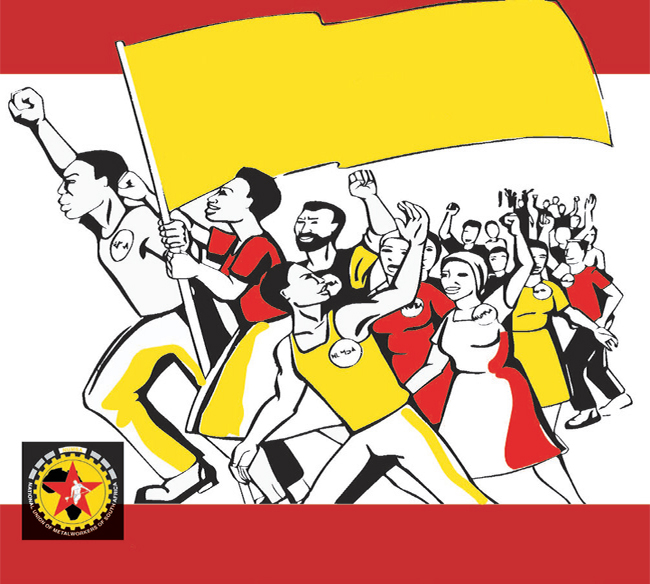 Here in Marikana, Black mine workers were protesting for a few measly dollars from a foreign mining concern, Lonmin mining. Living at virtually starvation wages, workers fought for a living wage from a consortium making millions off of their labor.

The owners gave orders to South African police to answer their demands with death. The ANC government, in many ways put in power by memories of events like Sharpeville, passed the orders down, and 34 miners and metal workers were executed in defense of capital.

Welcome, NUMSA. May you grow in numbers and militancy.

From Imprisoned Nation, this is Mumia Abu-Jamal