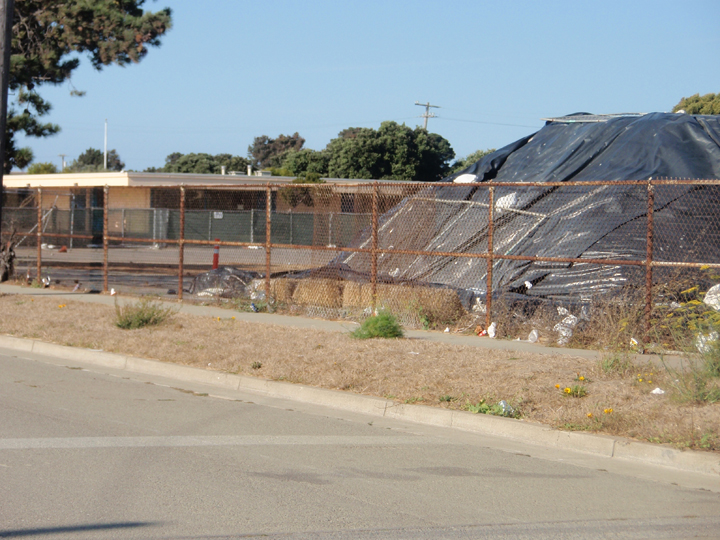 As if to save Site 31 from sinking into this burning hellfire, the C3 Church took over Treasure Island Elementary School at 401 13th St. Starting in 2006, students were bussed to the city.

It is probable that, because those primary school kids used this asphalt swathe as a track to practice running, their lives were changed forever by atoms exploding in their bodies.

Site 31 is sandwiched between the former San Francisco Boys and Girls Club on the north and, to the south, a fully-operational Catholic Charity-funded licensed daycare facility, Treasure Island Development Center.

In May 2013, the Boys and Girls Club vacated Site 31. Neighbors speculate the move came after the Navy fenced off the area, scooped this cavity from its southeastern end and began carting away truckloads of loosely-tarped toxic soil. The wind carried radioactive dust from the trucks into all of the Gateview Avenue and 11th, 12th and 13th Street neighborhood courts the locals call “fish streets” – Striped Bass, Halibut, Croaker and Flounder.

The day care center with its distinctive low slant roofs sits immediately across the fence from this toxic hole. During the day, toddlers from San Francisco, San Mateo and Marin play 25 feet away, and on warm nights from among the bullrushes genetically modified frogs pulsate their croaking chorus.

In his 2011 CalWatchdog.com article, “Treasure Island’s Toxic Problem,” Anthony Pignataro described Site 31 as a “big field next to an elementary school, of all things,” which, at that time, contained “immense piles of dirt, some covered in black tarps, others not.” He observed signs on a fence surrounding the field, trumpeting “Hazardous Waste Exclusion Zone.”

By March 2014, three years later, trucks have carted away all the dirt piles, and that sign is gone. But its square yellow and black steel clone reappeared on the nearby fence encircling the deep water-filled trench from which toxic soil was removed, warning: “Caution: Hazardous Waste Area – Unauthorized Persons Keep Out.”

On Thursday, Feb. 27, 2014, Kathryn Lundgren and I visited Site 31. Kathryn was aghast that the tattered green tarp fence near the Boys and Girls club lay flat on the ground.

I filmed Kathryn as she picked her way over the clanging metal, then marched across that dangerous expanse to the faraway toxic pit and back again demonstrating that kids playing or squatters searching shelter could enter the contaminated area with ease. Throughout her series of “toxic tours,” Kathryn repeated that “squatters” and “lost people walking around” could easily breach toxic buildings and exclusions zones, and walk over broken-down fences like the one we encountered here.

Kathryn walks in and videos Mordor.

In fact, On Thursday, March 6, 2014, a homeless friend described an experience he had in November 2013, returning with fellow squatters from a Treasure Island church feed through a “more or less circular, cut-off area,” taking “a shortcut” to get to “Buena Vista Island” faster. The group was most likely heading southeast from the C3 Church toward Yerba Buena Island through the toxic former playground that is now Site 31. This person’s conflating the name “Yerba Buena” with San Francisco’s “Buena Vista” Park indicates his unfamiliarity with the place.

“There was some signage that, like, suggested that it was a like a hazard, and, you know, like radioactive like signs or symbols, or whatever. We didn’t really know what the hell the deal was.”

A week or so later, he developed all over his body “gnarly,” out-of-control “crater scabs,” “like having a bug infestation – scratching and things like that – that spread like the goddam plague.

“I was just kind of wondering, like, maybe the radioactivity might have had some effect – my body being able to heal – and a direct effect on the wounds themselves which caused them to like grow out of control and spread like mad – just turn into this totally other whole affliction.”

A Site 12 resident attended to similar wounds incurred by a second group member. In their status as formerly homeless or at-risk for homelessness, Treasure Island’s subsidized housing occupants have a deep connection with unhoused people who escape there seeking shelter from San Francisco’s brutal streets. 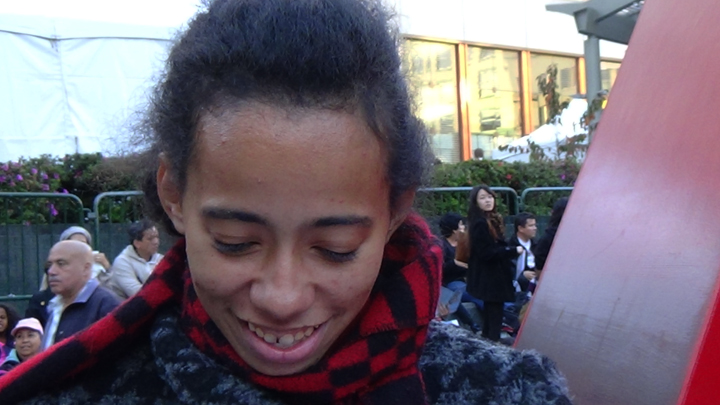 She “saw many buildings with asbestos hazards laden on them, graffiti made with spray paint and shattered, old windows. It looked very desolate.

“I walked by mesh wire fences which had ‘Radioactive’ labels strung on to them. I noticed a large mound of teal colored dirt on top of regular dirt conveniently placed across the street from a winery.

“I am just shocked that we’re allowed to access this ‘normal’ location even though the island is basically contaminated beyond repair.”

Returning, Kathryn announced, “I just saw (that) to take care of this problem, … (the Navy) needed to go (dig) underneath” into “the big wet pond.”

“The place where the grass is growing?” I asked.

She said she suspected they left the large former children’s play yard and track paved for a place to dump the dirt they excavated from the pit at the back of the space I was now calling Mordor.

“There were mounds here,” she remarked, recalling the tarp-covered dirt piles Pignataro described three years earlier, “covered with this thing called Rhino-snot. It’s like a green coating that supposedly absorbs (the radioactive material or chemical contaminants). Then they roll that up. What they do with that jelly afterwards, I don’t know.” I wondered whether they store it in the boxcars on Site 6 near the waste water treatment plant.

On her walk-around she noticed a drain in the center of the paved area.

“Dirt that they removed from (the hole) and left in piles is still laying here.”

“You mean the sandy stuff that’s blowing across?” I asked.

“Yes,” she answered. “And, it’s all dripping into that drainage tube in the center. There’s a wet ring around it.”

“This was (the school kids’) track,” she said sadly. “You can still see the lines where they used to run around it. And then soccer in the middle and basketball in the middle and …” Was she thinking of her own kids who went to school there? 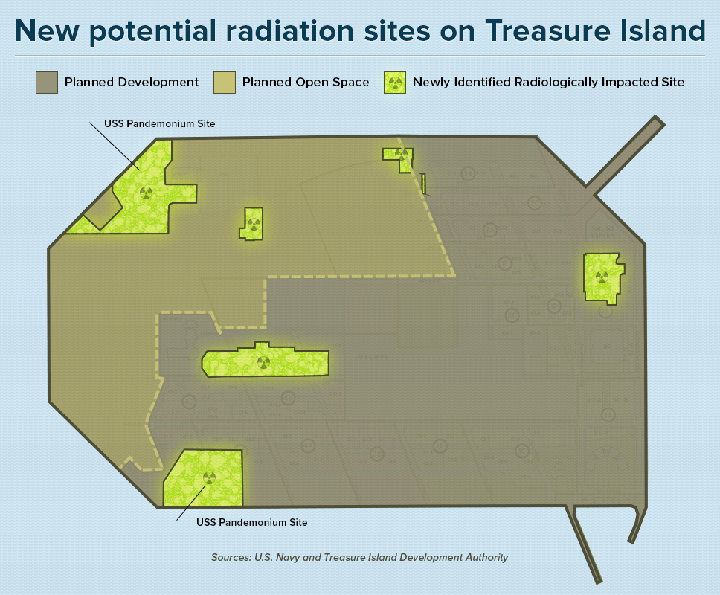 She laughed sardonically pointing out that the youngsters ran in that circle right around the center drain into which toxic silt still disappeared when it rained.

“I’m not laughing out of humor. I’m laughing because I just can’t believe this,” she said.

She took my camera on a second walk-around, filming evidence of an interesting pattern of dead and living trees next to each other along the fence perimeter.

Kathryn pressed a final point about Site 31. Behind us, the empty Boys and Girls Club building’s flat, low, tarred-over roof was covered with asbestos.

“The school buildings – kids climb on those. It happens all the time. They help each other up. They’re kids. And it’s low, and no one’s in them. So they come out here, and they hang out on it.”

She reported, “They (the military builders) used sheeting that most likely contained asbestos. That’s what I’ve seen in evidence throughout the other parts of the island. It’s usually the tar with the pebbles stuck in it, and then the asbestos is sticking out of it.” We, in fact, had filmed asbestos tiles lying in grass all over the island.

On her second circumnavigation of the track, Kathryn took my camera and filmed evidence outside the fence of a narrow “wind tunnel” of charred trunks, denuded branches and dead vegetation bordering thriving trees.

Gusting from northwest to southeast off the ocean side of the Bay, fast-moving Pacific winds lift poisonous fumes from Halyburton Court, carrying them across Site 12 homes, then east over Site 31. They blow off-island at the Bay Bridge’s Willie Brown span. This murderous current seems to have terminated trees and vegetation edging the former track and an adjoining side road.

Kathryn wanted to show me further evidence of this wind tunnel on a lane by the pond. So, we walked through the school yard and a few steps east.

There, tree trunk corpses tilted or lay fallen on cracked pavement next to dried beige scrub. A scant few feet on either side of this narrow path of death, healthy green-leaved Monterey pines and verdant weeds rose tall and proud along a cement cul-de-sac road where the remediation zone bisects Avenue E.

Pointing at a barren tree she filmed from the play yard side of the fence, I said, I’m calling it the Chernobyl tree because it’s right in the wind path blowing the chemicals and radiological stuff over it.

“Right,” said Kathryn. “You can feel the wind on your face right now. This is the path of the wind.”

“And the trees on either side of it are nice and green,” I added.

I commented on a brown tree that had fallen over, leaving its cones on the ground. “That’s (in) the wind path, isn’t it,” I said.

“It’s on my face,” she said. “You can feel it blowing. It’s just kind of whispering … right now, but when it really gets whipping, it pulls all the stuff from back there – Halyburton Court, the Pandemonium.”

“Where all the people (except military families) have never lived and the Pandemonium I radiation training ship was docked,” I said.

“Yeah,” she answered ruefully. “That wind is kicking through here, and all of these things in front of me are dying.”

She surmised that the death tunnel was formed by a combination of toxic particulate matter blowing from the former Pandemonium I site over deadly Halyburton Court and off the trucks that carted radioactive dust from the area.

“So, how can it not be a part of what (Navy scientists) see when they come here?” she asked. “They’re trained to see that, I thought. They’re scientists. You don’t notice these things? You don’t know how to observe patterns?”

Sadly, children are the beings who have been, and will be, most affected by the toxic wind, water and earth of deadly Mordor.

Radiation Bunny and other signs 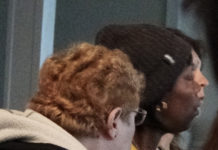