Oakland based artist Eesuu has been one of my favorite local visual artists for the last decade. I love his choice of colors and the ways in which he blends them, as well as I like the themes behind his work.

He is exhibiting a new body of work during the month of April in downtown Oakland at SoleSpace, 1714 Telegraph Ave., Oakland. Called “Sugar 2.0,” it looks at the history of this substance that has been used as a tool to enslave people, colonize land and build empires. The artist talk tonight, April 18, begins at 7 p.m. with Eesuu and moderator Michael Orange of Top Ten Social.

Check out Eesuu as he opens up about his newest body of work, his views on the city he lives in and the future …

M.O.I. JR: When and how did you become a visual artist?

Eesuu: I’ve been drawing and painting and making things all my life. The first painting I did was in oil paint at the age of 2. But it was in my middle 20s when I dedicated myself to art as my life calling and started selling my first paintings. I was working for a major financial company and hella unhappy there. It became clear to me I couldn’t give my all to that system and it was just as clear to me what my real passion was.

M.O.I. JR: How has the city of Oakland contributed to your development?

Eesuu: Oakland has been where my artist self was nurtured. I found a community that was creative and politicized with people who were culturally engaged. It’s changed a lot in the last eight to 10 years, so a lot of that community has moved on to other places and situations.

M.O.I. JR: What type of themes does your work deal with?

Eesuu: My work deals with the broad spectrum of life from my perspective – everything from love to oppression and resistance to orishas and spiritual concepts. My most recent show is revisiting the theme of sugar.

Not trying to tell a narrative or drive home specific points, but rather I’m using both the global history of sugar and its role in contemporary life as material to pull from and make what I hope is interesting and aesthetically pleasing art.

M.O.I. JR: What is so prominent about the word “Sugar” where you would make it the name of a series of work? What does sugar mean to the Black experience? What does your work under the name “Sugar” deal with?

Eesuu: You know how certain words are loaded to certain audiences? Like the word “cotton” is loaded to lots of Black Americans because of how symbolically linked it is to our collective past in this country.

“Sugar” doesn’t have the same impact to most people, but it probably should. Empires were built on the sugar industry. Its history impacts so many people, let alone its place in current day Western society.

It laces so many of the food products we consume on a regular basis and is part of the root of a health crisis in America, fasho. At the same time it has come to represent things we cherish, like a kiss from your auntie or some other form of love.

M.O.I. JR: Can you talk about why you decided to collaborate with SoleSpace and Top Ten Social? Can you tell us a little bit about your artist talk this Friday? What will you be saying about your “Sugar” series of work?

Eesuu: The first edition of this body of work was shown in my home a couple of years ago. When it felt like time to revisit the theme, I wanted to show it in a gallery setting to reach a broader audience. 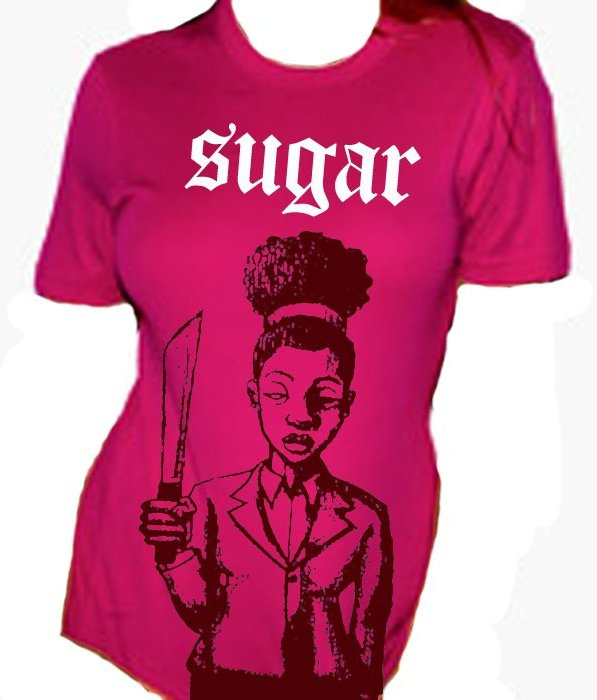 I’m out of the habit of formal submissions to show my work in somebody’s space, especially in Oakland where so many people know my work. So I thought I would just put it out on social media that I was looking for a gallery space to host this show, knowing that the owners of several art galleries and several curators would see the call.

Jeff at SoleSpace responded immediately and made his space available on my terms. We were already doing business with my t-shirt line, so I had a working relationship with him. Funny thing is none of those other galleries or curators on my 2,000-plus-person friends list even responded. I don’t think they took me seriously or maybe they didn’t think it would benefit them enough to be worth their time.

I’m glad it worked out the way it did. I asked Michael Orange to moderate the artist talk randomly. He’s asked me to do the same type of thing in a couple of situations, and I thought it would be interesting to reverse the roles. I thought he might bring with him an audience that could appreciate my work but may need the right person to introduce them to it.

M.O.I. JR: What do you think about the visual arts scene in Oakland – the New Oakland scene and the organic one? Who inspires you? Why?

Eesuu: I don’t know what to think about the visual arts scene in Oakland. The scene is changing with the demographic which is moving from a Black cultural vibe to more of a young white hipster thing. 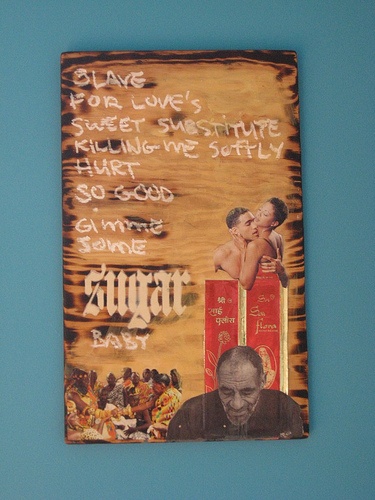 Black artists are still here, though, and we are still making relevant art and showing around town. I’m more interested in showing outside of Oakland, in and out of the U.S. Who inspires me? Everybody, the human experience when it’s genuinely expressed.

M.O.I. JR: What is needed to take the Oakland art scene to the next level?

Eesuu: Business: galleries that have collectors on their mailing lists who are buying artwork.

Eesuu: This year I want to take my t-shirt line, Orundide Afro Urban Couture, to the Afro Punk festival in Brooklyn, N.Y., and I want to participate in Art Basel Miami in some form, whether it’s showing in a gallery or doing a mural.

M.O.I. JR: How could people get in touch with you?

Thanks again, fam. I appreciate you taking an interest in what I’m doing.