May 16, 2014 – District Court Judge Gladys Kessler has for the first time ordered the U.S. government to suspend force-feeding of a hunger-striking prisoner in Guantánamo Bay. 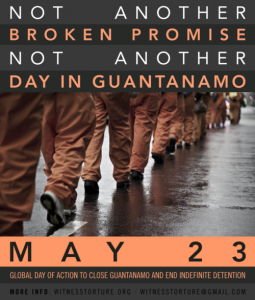 The same order requires the Obama administration to halt ‘forcible cell extractions’ of a prisoner, in which a team of guards in riot gear storms a prisoner’s cell to move him by force to feedings if he refuses to go.

Judge Kessler also stated that the government must preserve all videotaped evidence of cleared Syrian Abu Wa’el Dhiab’s force-feedings and forcible cell extractions, the existence of which Justice Department attorneys admitted only this week.

The existence of the recordings – captured by the military – emerged during the course of litigation in Washington, D.C.’s federal district court attempting to prevent abusive force-feeding.

The renewed legal challenge to the practice was launched after Reprieve’s initial force-feeding case, Aamer v. Obama, in which the D.C. Court of Appeals cleared the way for these cases. In this litigation, detainees revealed a host of abuses during feeding, including being left to defecate in restraint chairs, the gratuitous insertion and extraction of long feeding tubes, and speeds of force-feeding that grossly exceed accepted medical procedures.

The tapes are likely to show Guantánamo’s Forcible Cell Extraction (FCE) team transporting hunger-striking detainees who refuse – or are too weak – to walk to the force-feeding chair. This process, in which a team of military police in riot gear storm a prisoner’s cell and “subdue” him, has long been criticized as abusive. In 2003, USAF Spc. Sean Baker suffered permanent brain damage during a cell extraction training exercise. He was playing the role of the detainee.

Reprieve attorney for Abu Wa’el Dhiab, Cori Crider, said: “This is a major crack in Guantanamo’s years-long effort to oppress prisoners and to exercise total control over information about the prison. Dhiab is cleared for release and should have been returned to his family years ago. He is on hunger strike because he feels he has no other option left. I am glad Judge Kessler has taken this seriously, and we look forward to our full day in court to expose the appalling way Dhiab and others have been treated.”

“We are very grateful to Judge Kessler for recognizing the urgent need for judicial relief. The force feeding that has been happening at Guantanamo Bay is a stain on our country and must end,” said Jon Eisenberg, another attorney for Dhiab.

Washington – ENEWSPF – May 13, 2014 – A prisoner in Guantánamo Bay has revealed to his lawyers the increasingly brutal punishment meted out to detainees peacefully protesting their indefinite detention via hunger strike.

Emad Hassan wrote in a letter to his lawyers: “One Yemeni is 80 pounds and he was brought to his feeding by the Forced Cell Extraction (FCE) team, Guantánamo’s official riot police. Yesterday the FCE team beat him when they came into and out of his cell. He is 80 pounds with one broken arm. He cannot walk, just crawl from his bed to the faucet or toilet once he needs to use it! How can someone with this condition fight eight armored guards?”

“Yesterday the FCE team beat him when they came into and out of his cell. He is 80 pounds with one broken arm. He cannot walk, just crawl from his bed to the faucet or toilet once he needs to use it! How can someone with this condition fight eight armored guards?”

Emad, himself a Yemeni who has been on hunger strike since 2007 and cleared for release from the prison since 2007, has never been charged with a crime. He said in another letter:

“As I write now, [a detainee] is vomiting on the torture chair, having been brought there by the Forced Cell Extraction (FCE) team. The nurse and corpsman have refused to stop the feed, or to slow the acceleration of the liquids.”

In a renewed challenge to brutal force-feeding practices in federal court, Emad and other detainees have recounted speeds of force-feeding that grossly exceed accepted medical procedures. Medical expert Professor Steven Miles, M.D., has submitted an affidavit in which he describes the reported rates of force-feeding at Guantánamo as “an extraordinary departure from customary medical practice” reminiscent of “a practice of torture called ‘Water Cure’ that has been practiced since the Middle Ages.”

Emad’s letter continues: “The culmination of six or seven years of force-feeding is now taking its toll. A couple of months ago I had been given a kind of feeding formula … The formula made me vomit from 10 p.m. to 7 a.m. – pieces of fat kept coming out whenever I vomited …

“They have begun this cruel process with [another detainee] – at 6 a.m. he was holding a cup with vomit in it after six brutal hours of feeding. Every day is like that. If this isn’t torture … surely this is what normal people call it? By normal, I mean the normal people outside the prison, because there is no normality here.”

One hundred fifty-four men are still held at the prison, more than half of whom have been cleared for release by the very government that continues to hold them without charge or trial.

The most recent estimate of the number of men still on hunger strike in the prison is approximately 17. The authorities at Guantánamo stopped releasing official figures towards the end of last year, while detainees’ access to lawyers has been increasingly restricted – reducing the availability of accurate information on the strike.

The World Medical Association is unequivocal in its denunciation of force-feeding, stating in the Declaration of Malta (2006) that the practice is “unjustifiable,” “never ethically acceptable,” and “a form of inhuman and degrading treatment” when the patient is able to make an informed and voluntary refusal of food.

Medical expert Professor Steven Miles, M.D., describes the reported rates of force-feeding at Guantánamo as “an extraordinary departure from customary medical practice” reminiscent of “a practice of torture called ‘Water Cure’ that has been practiced since the Middle Ages.”

Emad’s brother, Mohammed Abdallah, said: “Since my brother was rounded up and taken to Guantánamo on false pretenses, despite never having done anything wrong, our family has been devastated without him. When we read his letters describing the dreadful torture and horrific treatment that Guantánamo authorities subject him to it breaks our hearts.

“There is no reason at all that Emad can’t come home to us in Yemen or anywhere we can see him. Please, President Obama, let him return to us.”

Cori Crider, attorney for men in Guantanamo, said: “Although the authorities are trying to cover it up, the hunger strike at Gitmo is still going on and the military’s effort to suppress it as savage as ever. We’re fighting this brutality in federal court, but there is one man who has the power to end this pain. Obama must send cleared men like Emad home to their families at once.”

“There is no reason at all that Emad can’t come home to us in Yemen or anywhere we can see him. Please, President Obama, let him return to us.”

For further information and copies of court documents, go to www.reprieve.org. Reprieve is a UK-based human rights organization that uses the law to enforce the human rights of prisoners, from death row to Guantánamo Bay.