Africa’s elite and the elite internationally have concluded the African Development Bank’s 50th anniversary celebrations and annual meeting under the theme: “The Next 50 Years: The Africa We Want.” Over 3,500 delegates, seven African heads of state, the governor of the Central Bank of China and the U.S. deputy secretary of treasury were among the dignitaries to grace the occasion. The guests and the host were in an upbeat and hopeful mode, predicting that the next five decades will be far better than the preceding ones.

There are enough grounds to celebrate some of Africa’s political, economic and social achievements since 1957, when Ghana blazed the trail to become the first to gain political independence from British colonial rule. Africa can now boast of a total population that exceeds 1 billion, 54 sovereign states and a rich endowment of natural resources. There is every reason for Africa to celebrate its shining moments, the founding fathers of the post-colonial order who shaped them and the African people who make them happen.

Beneath the confident calm, Africa is on edge, and the participants in Kigali were aware. After five decades of political independence, thousands of reports on human development, tons of advice from mainly Western consultants, and trillions in aid money, the condition of the majority of African people remains precarious. Africa remains the continent of peasants and, increasingly, of urbanized populations living on the margins of squalid slums bursting at the seams.

Africa’s silent emergency comes in the form of pernicious killers in the form of poverty, hunger, disease, illiteracy and unemployment. These preventable conditions claim millions of African lives every year because they target Africa’s heart and soul: children, women, the elderly and peasants.

Though the statistics do not capture the full and often intangible extent of human suffering and lost opportunities, they are nevertheless shocking. According to UNICEF, annually there are 3.2 million deaths of children under 5 in sub-Saharan Africa from preventable conditions; Africa is the most dangerous place to have a baby in the whole world (800 women die every day during pregnancy and child delivery, and half of these deaths are in sub-Saharan Africa). Over 11 million Africans under the age of 25 enter the labor market every year, only to swell the ranks of the unemployed.

Africa’s loud emergencies are exemplified by the hundreds of missing Nigerian girls still in their captors’ hands, another terrorist attack in Kenya, civil war in Central African Republic and Southern Sudan, continuing conflict in the Democratic Republic of Congo, a failed state in Somalia, Rwanda and Burundi sliding into civil war, Uganda’s long-running battles with Joseph Kony, stand-off in Egypt, uneasy peace in Libya, to cite a few examples.

A report, “Africa’s Missing Billions,” by the international charity Oxfam “showed that between 1990 and 2007 the cost of armed violence and conflict to Africa was $300 billion – approximately the same as the aid money that flowed into the continent during that time. Losses continue at around $18 billion a year. Conflict shrinks the economies of affected African countries by at least 15 percent a year.”

Hence, as the elite in Kigali conclude the summitry and deliberations, there is the other part of Africa that is on fire, dying, burning silently and occasionally bursting into deadly conflict and tragedies.

Unable to find hope, jobs, inspiration and the reason to live, Africa’s youth have become the easy victims of war-lords, rabble rousers, demagogues and modern day slave traders. Africa’s youth, which should be the continent’s present and future, have been turned into pirates, terrorists, rebel child soldiers and sex slaves.

Dreading the conditions in their own countries, they take dangerous voyages into uncertain worlds, and they perish on high seas as they did last October 2013 in Lampedusa, Italy. A 15-year old Somali boy stowed away in an airplane wheel well last month flying from San Jose, California, to Hawaii, in search of his mother in a refugee camp in Ethiopia.

If Nigeria – population approximately 174 million, largest oil producer in Africa, with annual defense spending of $2.3 billion – cannot rescue its own young girls from Boko Haram, and Uganda cannot defeat a three-decade-old menace from Joseph Kony and his Lord’s Resistance Army, will a handful of U.S. Marines and aircrafts save them?

Africa has a crisis of leadership. Many of Africa’s rulers have, by and large, betrayed African people for too long. If this is the diagnosis, what is the treatment plan?

First, Africa’s ruling elite must admit that they are mostly to blame for Africa’s problems. They must stop the opportunistic habit of depending on the West’s help (the East helped as well during the Cold War), and denouncing the same benefactor when Africa’s self-inflicted wounds become too obvious.

Unless there is a change of mindset, African elite will continue to act like a herd, yesterday behind the West or East, today the West or China, and tomorrow, God knows who. Africa must follow its conscience and its people’s interests.

Second, African leaders must recognize that the interests of African people are sovereign and, therefore, a first priority. Of these interests, nothing is more important than the right to life, security, health, education and livelihoods.

It is in this context that Africa must spend less on armies and armaments, because African countries do not generally fight each other. Africa’s armies fight their own people, and record shows that they generally do an exceedingly poor job at that.

African leaders must stop denying fundamental human rights to their population. Freedom and equal opportunity will unleash entrepreneurial energy that has historically transformed other societies. They must invest in education, health, rural and urban areas where the majority of poor Africans live, and small and medium-sized enterprises. In all these areas, women and youth should be given priority.

Third, Africa leaders must have a clear and robust strategy to exit from being the dependent patient, in and out of rehab or intensive care of aid. Africa’s natural wealth must beget value. Africa’s export of natural resources, national revenues, foreign investments and aid money must be deployed and recycled into developing the capital, knowledge and skills to create value-added products and services. This is the trajectory of wealth creation that the rich aid-givers of today follow. Africa is not an exception.

Fourth, African leaders must prevent and cure the recurrent epidemics of self-inflicted conflicts. The current fire-fighting demonstrated in international peacekeeping, drones, and ad hoc arrangements for U.S and Western armies to intervene in Africa can be temporary relief but are not sufficient to ensure lasting security and peace.

Conflicts within African countries remain matters of unresolved problems because of the cut-throat competition for power among the elite. It is a life-and-death struggle to capture state power and in turn use it to access and hoard resources and/ or dispense a victor’s justice to the losers.

The winner takes it all, and often the losers must accept their losses, or otherwise organize for the next round of bloody conflict since the status quo rarely yields power peacefully. The antidote to this is to democratize and enlarge the circle of people’s participation in governance, strengthen the rule of law, and nurture a culture of dialogue, power-sharing and peaceful resolution of conflicts.

Last, but not least, African rulers must heed the wisdom from all cultures of the world. Human progress is not solely about building material abundance and registering GDP growth, important as they are for human survival.

Creative imagination, innovation, science, technology and entrepreneurship proceed from man’s quest to improve his lot. To do this, he/she discovers that co-operation is both a pre-condition for survival and an opportunity to demonstrate what Bantu-speaking peoples of Africa call Ubuntu (or human-ness). Africans must learn from their own achievements and flaws and those of other societies to nurture the wellbeing and resilience of individuals, families, communities and nations.

A mind rich on Ubuntu peels away clan, tribe, gender, race, class, religion and nation identities to see the brother and sister in the other. Such a mind is not quick to kill and plunder. It does not commit genocide or easily go to war. It is a mind that shares and weeps when others suffer. It is a mind that sees dialogue, respect of others and humility as strengths. It is a mind that is happy because it fosters happiness in others.

In a stampede to become like the West and, of late, like China, Africa’s ruling elite have lost their African-ness, and yet they get frustrated when they cannot exactly emulate the West’s and China’s ingenuity.

African leaders must change their own mindsets; put women and children at the center of all national and continental endeavors; create an enabling environment for growth of institutions, freedom and the rule of law; champion Made-in-Africa value-added products and services for consumption and exchange; prevent and cure violent conflicts; and, above all, embrace Ubuntu as a central organizing philosophy in African societies.

African societies must liberate themselves from chaos, suffering, and dependency.

African leaders must redeem themselves from scorn, shame and condemnation before it is too late.

Africa, be and heal yourself!

Dr. Theogene Rudasingwa, former ambassador of Rwanda to the United States and author of “Healing a Nation: A Testimony,” can be reached at ngombwa@gmail.com.

It is our pleasure to announce today, June 8, 2014, the publication of two books by Dr. Theogene Rudasingwa, “Guérison d’une Nation: Un Témoignage” (a French translation of his earlier book, “Healing a Nation: A Testimony”) and “Urgent Call,” both by Createspace, an Amazon company in the United States.

“Guérison d’une Nation” is a portrait of a family caught up in the larger, tumultuous and often tragic story of Rwanda. Though the history of Rwanda as a nation spans centuries, this testimony casts a glance at the two violent revolutions (1959, 1990) and their catastrophic consequences that have affected every Rwandan and Rwanda’s neighbors in the Great Lakes region of central Africa.

“Each revolution began with a promise, only to betray it. We repeatedly have become a nation of losers and winners, of perpetrators and victims, with individuals, families, communities and ethnic groups (Hutu and Tutsi) changing positions in a race beset with death and destruction,” Dr. Rudasingwa writes.

The book asserts that Rwanda is broken and hurting and explores how to build a free, united, democratic and prosperous Rwanda, at peace within and with her neighbors.

“Urgent Call” is a call to action for regime change in Rwanda so as to enable societal transformation, healing and peace. The author believes and warns that Rwanda has once again reached a tipping point, as in 1959 and 1990, with all indications of another civil war and more bloodshed. 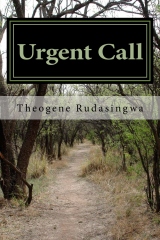 The book is a collection of Dr. Rudasingwa’s writings and speeches since 2010 mainly on Rwanda, but it occasionally touches on the African condition, the United States and its policies in Africa. Its central message is that Rwandans must unite, mobilize and organize themselves so as to overcome President Paul Kagame’s criminal and fascist regime.

Dr. Theogene Rudasingwa is a graduate of Makerere University Medical School, Uganda, and the Fletcher School of Law and Diplomacy, Tufts University, Massachusetts, United States. He has previously served as the secretary general of Rwanda’s ruling party, the Rwandese Patriotic Front (RPF), ambassador of Rwanda to the United States and chief of staff for President Paul Kagame. He is the coordinator of the Rwanda National Congress (RNC), an opposition political organization in exile, and the author of an upcoming book, “Crime Scene Rwanda.”