by the International Jewish Anti-Zionist Network

“Our message to the world is that we are peacefully resisting our arbitrary detention, despite the threat the hunger strike imposes on our health … Our bodies are weak, but our determination to end injustice and achieve our demands has never been stronger … According to international law, the occupation’s practice of administrative detention is arbitrary and violates all international human rights regulations and laws that call for respecting human beings, their rights, freedom and lives …

“Without international and media pressure, nothing will change. The humanitarian side of the issue should be revived; it is not a matter of numbers and years. There are children, sons and daughters, parents and families that are suffering from the raids, arrest processes and administrative detention renewals and everything else that is directly connected to these conditions.” – Palestinian political prisoners on hunger strike, Day 55, June 17, 2014

“Without international and media pressure, nothing will change.” – Palestinian hunger strikers

From California to Palestine to Guantanamo, prisoners are resisting the torturous conditions to which they were never sentenced. On July 8, 2013, 30,000 prisoners across California began a hunger strike and work stoppage protesting long-term solitary confinement and horrific prison conditions. The day after, Palestinian former political prisoner Sheikh Khader Adnan, whose 66-day hunger strike protesting being detained without charge, attracting worldwide attention, wrote in support of the California hunger strikers:

“Today, the hunger strikes of the Palestinian prisoners inspire those who are detained to engage in hunger strikes to guarantee that they are treated humanely and with respect and dignity.” – Sheikh Khader Adnan

Now Palestinian prisoners are in acute need of our support. Palestinian detainees in Israeli prisons launched an open-ended mass hunger strike on April 24, 2014. Since then, detainees have been subsisting on only water and salt. This is the latest in a series of mass and individual hunger strikes since 2011 protesting Israel’s policy of “administrative detention,” whereby Israel holds Palestinian men, women and children without charges or trial, or the opportunity to hear the evidence against them.

The Israeli military commander issues detention orders for periods of one to six months, which can be renewed indefinitely. In its indeterminate length, lack of due process or transparency, and its use as punishment for political activity, administrative detention resembles California’s Security Housing Units (SHU).

Administrative detention has been used against tens of thousands of Palestinians; detention is a constant threat in Palestinian daily life. Random incarceration and torture are used to collectively punish Palestinian people, as they seek to survive and resist Israeli military occupation and colonization.

Random incarceration and torture are used to collectively punish Palestinian people, as they seek to survive and resist Israeli military occupation and colonization.

As in the California strike, hunger strikers are experiencing serious consequences to their health, as well as harsh retaliation by the Israeli Prison Service (IPS), including placement in solitary confinement, continuous transfer to different prisons, beatings, constant shackling, strip searches, and other tactics of abuse and humiliation.

Family visits for all prisoners have been denied for four months, and six months for hunger strikers. Israeli authorities have also attempted to limit visits by lawyers – to cut off communication between hunger strikers and the outside world. Prisoners report mistreatment and negligence by medical staff, and accuse the prison physicians of working with IPS to break the strike, in violation of the World Medical Association’s Malta Declaration on Hunger Strikers.

Prisoners also report that physicians are threatening them with force feeding. This is a grave threat, as the Islareli Knesset, following the U.S.’ lead, is currently debating legalizing force feeding. According to Addameer, a Jerusalem-based prisoner support and human rights group:

“Although the Israeli Medical Association is firmly against this proposed force feeding, Israeli Prime Minister Benjamin Netanyahu has recently stated that Israeli physicians will be found to carry out the force feeding and has also stated that the process for passing of the force feeding legislation will be speeded up in an attempt to deal with the current hunger strikers. If this legislation is indeed passed into law it would have serious implications as, according to the World Medical Association Declaration of Malta on Hunger Strikers, ‘Forcible feeding is never ethically acceptable.’”

Force-feeding geese is illegal in Israel because of its cruelty, according to Haaretz. The fact that the Legislature debates using it on Palestinian people is obscene.

Force-feeding geese is illegal in Israel, yet the Legislature debates using it on Palestinian people.

The last mass hunger strike was ended through negotiations between the hunger strikers and IPS on May 14, 2012. Israel agreed to improve prison conditions – and to limit use of administrative detention to “exceptional circumstances.” But IPS has continued to use it regularly and has not improved conditions. 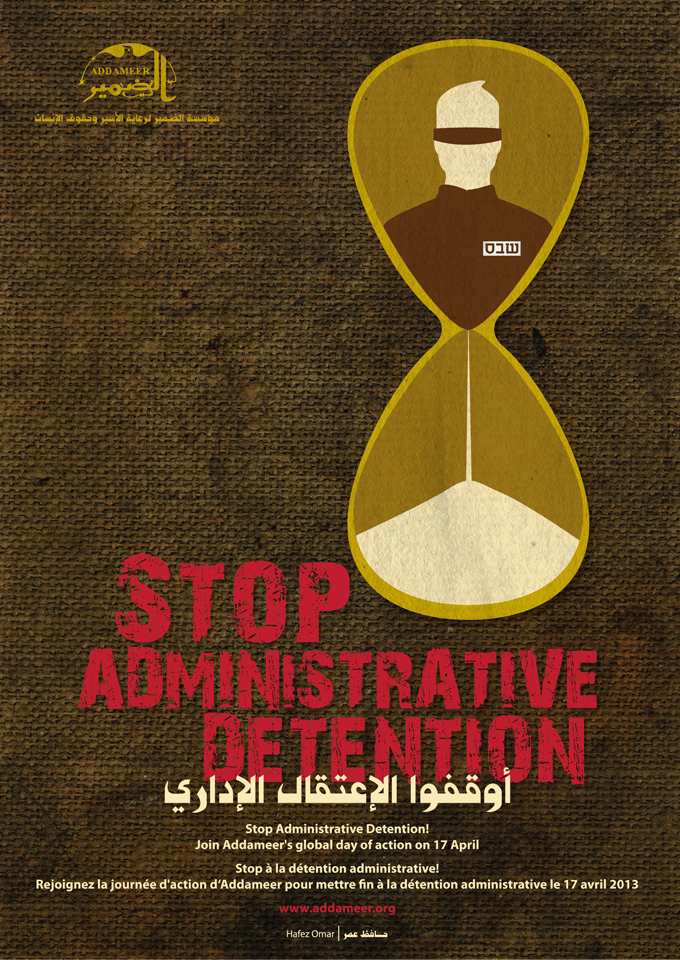 This will sound familiar to California prisoners, their loved ones and solidarity activists, who have seen the California Department of Corrections and (no) Rehabilitation renege on their promises after the hunger strikes in 2011.

From California to Palestine to Guantanamo, hunger strikers have offered solidarity to one another. They are not only fighting the same fight in each of the prisons they find themselves in, they are fighting the same enemy.

We know that repression in the U.S. and in Israel are deeply connected and use one another to attempt to legitimize and justify repressive actions and policies. Both Israel and the United States use policing, imprisonment, and especially solitary confinement, and surveillance as tools to keep people and movement down – often sharing weapons, technology and training. Israel plays a large role in the training of repressive police forces in the United States and elsewhere.

On the issue of force feeding, the U.S. invited Israeli doctors to advise them on methods of dealing with hunger strikers, and this week in the debate on force feeding, Israeli Prime Minister Netanyahu justified legalizing the practice by making reference to the U.S.’ force feeding of people imprisoned at Guantanamo.

And the United States provides Israel with $6 billion a year to create weapons and tools that they first use against Palestinians and then sell back to the United States and other countries to use against their own people and on movements being built to resist their pursuit of global conquest.

Across both the U.S. and Palestine, prisoners are willing to risk their lives organizing for their rights and dignity. They are the reminder of what our governments are willing to do to keep us from demanding justice. Therefore, their fight is for the freedom and dignity of us all.

Since the beginning of the hunger strike, there have been calls for the International Committee of the Red Cross (ICRC) to publicly condemn Israel’s use of administrative detention and highlight the situation of the Palestinian hunger strikers. Even on their 55th day of hunger strike and as their health continues to deteriorate rapidly, these calls have not been heeded and the ICRC continues to remain silent.

Please email the ICRC office in Jerusalem, at Jer_Jerusalem@icrc.org, and ask them to immediately and publicly condemn Israel’s use of administrative detention, the recent arrest campaign across the West Bank, and to highlight the current situation of all Palestinian hunger strikers.

What you can do to stop Israel from force feeding the prisoners on hunger strike:

If you are able, send messages of solidarity with the Palestinian prisoners to Addameer, P.O. Box 17338, Jerusalem.