Leroy Stanfield is a Bay Area comedian on the rise, who some may know from his company, GoBaby Productions, and others may know him from his crew, The Bay Boys of Comedy. But if you haven’t heard of him, you might want to look out for this local talent.

One thing that I respect about him is that he is not just a comedian but a community man, who is doing what he thinks will help to quell all of the street violence in Oakland. I can respect that more than somebody who is just sitting on his ass complaining.

At the end of July, he is organizing Oakland’s First Annual Comedy Superfest Weekend. Check out this independent businessman in our community making a difference in his own words …

M.O.I. JR: Can you tell people a little bit about your Stop the Violence Campaign? When did you start it? What do y’all do?

Leroy: That would be my pleasure. It started Nov. 6, 2010. We call it SAVE, Soldiers Against Violence Everywhere. Why we stand? Well, because murder is a demoralizing crime that impacts every aspect of society and should never be tolerated. All citizens have a right to safety in the community where they reside.

Reminiscent of the 1960s sit-ins, Soldiers Against Violence Everywhere (SAVE) was created to raise awareness about the crisis of violence in the city of Oakland and create a grassroots movement to raise awareness and encourage residents to take action.

The SAVE movement was initiated by my pastor, Zachary Carey of True Vine Ministries. His impassioned call for action came as a direct result of the murder of Leon Wilson, a True Vine member, who was gunned down in front of Allen Temple Baptist Church. Too many churches in Oakland have similar stories to tell.

Soldiers Against Violence Everywhere encourages residents to break the silence, speak out, get engaged and take a non-violent stand against the rampant murders in our community.

We stand every Saturday from 11 a.m. to 12 p.m. in an area where a murder had taken place. We do this to let the families of the victim know that there is folks out there who care.

For more information and how to get involved – and we encourage everyone to join in – visit the SAVE website, www.Save-Oakland.com.

M.O.I. JR: You’ve been doing a gang of comedy events around the Bay. Now you have the First Annual Oakland Comedy Superfest Weekend. What is it? And where is it going to be? And who are some of the comedians that will be there?

Leroy: You got it right, sir. GoBaby Productions’ Oakland’s First Annual Comedy SuperFest Weekend is a weekend full of laughter. It’s strictly for the fans of laughter.

For three days we will have six different comedy shows with six different lineups with some of the funniest comedians from all across the country. No contest, no judges, just the crowd and comedians and a whole lot of fun.

Every summer we have all kinds of events here in Oakland – KMEL Summer Jam, Stone Soul concert, for example – but nothing for the love of laughter. So we here at GoBaby Productions decided to start an annual comedy super FEST weekend. We plan to make it bigger and bigger each year.

We will open up each show with a spoken word artist: 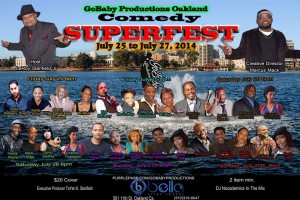 All performing artists will leave everyone wanting more. Trust me on that. Since this is our first Comedy SuperFest, all of the performers are giving me a discount so we are able to keep the ticket prices very low. For tickets to all shows, please visit www.purplepass.com/GoBabyProductions.

M.O.I. JR: Why is laughing good for people’s health?

Leroy: Well, my wife and I have been studying the Bible, and it’s funny you ask that, because we came across a scripture in the Bible. I believe it is Proverbs 17:22. And it says, “A merry heart does good like medicine, but a broken spirit dries the bone,” so that tells us right there that laughter is good for you.

I also did a little research about laughter. Laughter does quite a few things. Laughter has been proven to be very healing. Laughter is good for the heart. Laughter can change and improve your mood and reduce stress. It also helps defuse conflicts, which goes hand in hand with SAVE Oakland Stop the Violence Movement.

M.O.I. JR: What else is going on with your production company, GoBaby Productions?

Leroy: We are pleased to say that we had our first annual BBQ, which is an appreciation event for all of our supporters. It’s just our way of saying thank you.

We have our annual summer GoBaby bowling league, which runs from June through August on every Thursday night at Albany Bowl – shout out to Albany Bowl. More on the business side, we spend time traveling the country, scouting for new talent for our shows.

M.O.I. JR: Do you see the Oakland comedy scene on the rise?

Leroy: Absolutely I do. There are many new comedians from Oakland on the scene, putting in work and trying to get their names out there. Just a few off the top of my head are comedian Marcus McFarland, who happens to be the creative director of GoBaby Productions.

You have The Bay Boys of Comedy, which is a group of comedians that I am involved with from the Bay Area, of course, as well as Antwan Johnson, Jay Rich, Wight Out, Big Tree and Leon Gibson. And there are many more comedians putting in work.

You can look for good things coming out of Oakland. Be on the lookout for GoBaby Productions.

M.O.I. JR: What do you think about the recent announcement that legendary Oakland-based comedian Paul Mooney has cancer?

Leroy: I had heard something like that but I don’t follow his health too much. I will keep him and his family in my prayers. I did work with Paul Mooney. Well, I can’t say I worked with him, but I did warm up his crowd for a few of his shows at the Berkeley Black Rep. It was a great pleasure of mine to do that for him.