Oakland – On July 29, the Oakland City Council surprised observers by postponing a final vote on the West Oakland Specific Plan (WOSP) without setting a new date. WOSP is a massive redevelopment scheme spearheaded by some wealthy investors planning to gentrify the old Oakland Army Base and major portions of West Oakland that are cynically being called Opportunity Sites, and at first reading on July 15, the City Council voted 7-0 to approve it, with only Desley Brooks abstaining. 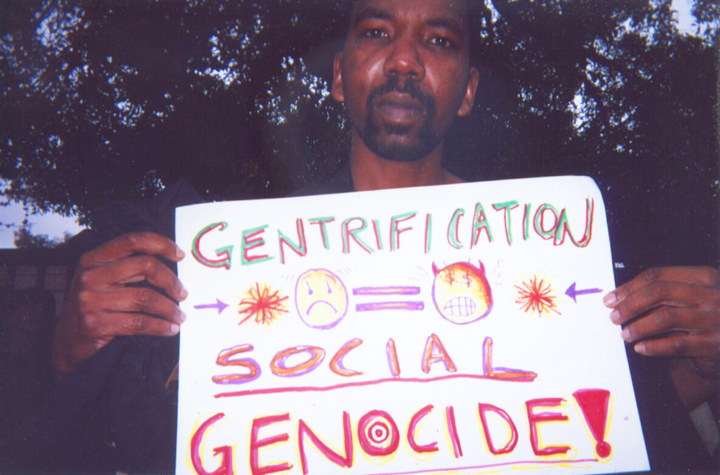 Opponents believe that WOSP will result in the displacement of thousands of long-time low-income renters in West Oakland. Postponement of the final vote gives them an opportunity to press city leaders and the public to reassess the scheme.

Supporters claim that WOSP will result in the remaking of West Oakland into a whole new gentrified community for higher income renters and market rate housing developments. WOSP is expected to result in as many as 5,000 new market rate apartments, 4.7 million square feet of new commercial and industrial space, with as many as 28,000 new jobs, according to City Planner Ed Manasse.

But WOSP will exclude primary recycling operations within the Third Street CIX zone in the area bounded by Ettie, Hannah, 32nd and 34th Streets, which is currently an industrial block. WOSP recommends changing the current zoning for residential development, which will result in the loss of future  recycling operations needed by the homeless and long-time residents of West Oakland.

Millionaire Phillip Tagami and wealthy Wall Street investors Hamid Moghadam, Douglas D. Abbey and T. Robert Burke have teamed up together to promote the massive gentrification projects in West Oakland. These are the wealthy investors who are the movers and shakers in the combined redevelopment schemes to gentrify the old Oakland Army Base and West Oakland.

The AMB Co., founded by Moghadam, Abbey and Burke, which is presently called Prologis Inc., and the California Capital & Investment Group, founded by millionaire Phillip Tagami, is the master development team that is working with the Oakland Redevelopment Agency and the Port of Oakland to develop the entire former Oakland Army Base under one vision. As part of the same gentrification vision, the Redevelopment Agency has also been taking steps to gentrify major parts of West Oakland and what are being called the Opportunity Sites.

Once WOSP becomes the law of the land, the plan is to target the Opportunity Sites for redevelopment and maximum exploitation by wealthy developers. WOSP legislation will be used as a marketing tool to attract developers to the Opportunity Sites. Low-income people need not apply and will be abandoned to fend for themselves once this gentrification scheme gains traction.

The WOSP is also being designed as a sneaky way for developers and the city to avoid complicated environmental impact reports and pesky zoning regulations in the effort to develop the Opportunity Sites as quickly as possible. Other “specific plans” similar to WOSP exist to redevelop the Coliseum area and the Lake Merritt area.

In the pocket of wealthy investors from Oakland and Wall Street, Oakland’s Mayor Jean Quan and the City Council are rapidly moving forward on the massive gentrification scheme that is destined to displace thousands of West Oakland’s low-income households.

Known by locals as the WOSP gentrification scheme, it will result in major rent increases for the low-income and working poor residents throughout West Oakland and will displace many of them from their homes in the process. According to public records, 78 percent of households in West Oakland are renter occupied, with the median income of $28,055 for a three-person West Oakland household in 2011.

The high stakes controversial plan has met with resistance and protests by local groups including Justa Causa/Just Cause, Against the Struggle and such luminaries as Elaine Brown, a former member of the Black Panther Party, according to reports.

The WOSP is also being designed as a sneaky way for developers and the city to avoid complicated environmental impact reports and pesky zoning regulations in the effort to develop the Opportunity Sites as quickly as possible.

In a July 15 email, Robbie Clarke of Just Cause writes: “A large public turnout is expected as opponents fight to maintain relevance to proposals in the plan. The recently released draft plan of WOSP outlines a number of areas ripe for development in West Oakland and calls for incentives for investment in these areas. Organizers against say the plan will displace working families who have lived in West Oakland for years and that it was not created to keep current working-class residents/families of color in the neighborhood.”

Indeed, in all of Oakland’s specific plans, city officials and staff have refused to require any affordable housing, claiming it would disincentivize developers from investing and would create lopsided development throughout the city.

In West Oakland, 33 percent of residents are living below the poverty level. The WOSP gentrification scheme will pave the way for the construction of thousands of condominiums and market rate apartments that poor people will not be able to reside in.

Tenants moving into the new developments will not have Just Cause renters’ protection. Additionally, the new market rate housing developments will compel the rents to skyrocket throughout West Oakland, eventually forcing the existing poor out of their rental units when their landlords decide to demand higher rent.

The coordinated policies and investment activities about to take place will eventually leverage $243 million from the state Trade Corridor Improvement Fund, $32 million in local agency funds, and as much as an additional $200 million from various federal agencies to gentrify West Oakland. All of this funding will end up being used as a force and marketing tool to displace the poor from West Oakland.

In all of Oakland’s specific plans, city officials and staff have refused to require any affordable housing, claiming it would disincentivize developers from investing and would create lopsided development throughout the city.

The AMB Co., which is presently called Prologis Inc., and the California Capital Investment Group, founded by millionaire Phillip Tagami, are spearheading the corporate attack to gentrify the Oakland Army Base and West Oakland. They plan to enhance their already huge fortunes by redeveloping the old Oakland Army Base and what are being called Opportunity Sites in West Oakland, once WOSP becomes the law of the land.

In 2011, ProLogis and AMB merged to become what is now called Prologis Inc., the largest industrial real estate company in the world with $51 billion in assets under its management during the first quarter of 2014. Prologis Inc. has 1,400 employees, is headquartered in San Francisco and was co-founded by wealthy industrialists Hamid Moghadam, Douglas D. Abbey and T. Robert Burke.

According to Forbes, Hamid Moghadam, 58, the chief executive officer for Prologis Inc., was paid a total of $15,190,029 in compensation during 2013, and SEC filings revealed that he owned 2,359,762 shares of AMB Co. common stock in 2000. The stock for Prologis Inc. was going for $41.46 per share on July 15, 2014. He is also a trustee of Stanford University and is on the executive committee of the Urban Land Institute.

Headquartered in Washington, D.C., the Carlyle Group has become notorious for making billions on the so-called war on terror, its investors including ex-President George W. Bush and members of the family of Osama Bin Laden.

The other major player wanting to gentrify the Oakland Army Base and West Oakland with the WOSP gentrification scheme is the California Capital Investment Group founded by millionaire Phillip Tagami, who became notorious when he pulled out a shotgun and threatened to use it against members of the Occupy movement during a November 2011 protest in Oakland. The California Capital Investment Group has made over a billion dollars in business deals in Oakland and the East Bay since its inception over 20 years ago and has merged with Tribune Commercial, according to its website.

In addition to WOSP, on March 5, 2014, Mayor Jean Quan announced that she wants to bring 10,000 new renters into the City of Oakland and wants to build 7,500 new housing units at 15 projects across the city, as a way to capitalize on Oakland’s hot rental market. She wants to turn Oakland into a playground for the rich and powerful.

From September 1998 through December 1999, 30-day no-cause evictions rose by 300 percent, with 56 percent of those evicted being families with children and 75 percent people of color. Most evicted renters earned less than $25,000 per year and paid between $600 and $700 in rent per month for one-bedroom apartments in Oakland.

By 2004, the average minimum cost to rent a studio apartment in Oakland was around $625 per month, compared with around $850 to rent a studio condominium. One-bedrooms were similar: apartments $650, condos $850.

Once Mayor Jean Quan’s plan to bring in 10,000 new renters kicks in, in addition to WOSP, the rents are expected to skyrocket even further in Oakland.

Once Mayor Jean Quan’s plan to bring in 10,000 new renters kicks in, and if the City Council votes to approve WOSP, rents are expected to skyrocket even further in Oakland.

Lessons from Lakeview: Families and students of color in crisis