Ted Wafer faces a maximum sentence of life in prison

Theodore Paul Wafer, 55, of Dearborn Heights, Mich., was convicted of the murder of 19-year-old Renisha McBride on Thursday, Aug. 7, in downtown Detroit. The jury of 12 men and women – four of whom were African American and three of whom were of Middle Eastern or Arab descent – began deliberations a little before noon on Wednesday, Aug. 6.

The Wayne County jury found Wafer guilty of second-degree murder, manslaughter and using a firearm in the commission of a felony in the Nov. 2, 2013, killing of McBride. Wafer was remanded into custody after the trial and will be sentenced Aug. 25 by Judge Dana Margaret Hathaway. He faces a maximum of life in prison.

“We are obviously very pleased with the jury verdict and feel that justice was served today,” said Wayne County Prosecutor Kym Worthy. “We sincerely hope that this brings some comfort to the family of Renisha McBride.”

Cheryl Carpenter, Wafer’s defense attorney, had no comment on the verdict.

Wafer initially told police that he had shot someone banging on his door, that the gun discharged accidentally and that he did not know the weapon was loaded. Once charges were filed, however, Wafer claimed self-defense under the Castle Doctrine, the basic philosophy of which is that a person’s home is his castle and there is no duty to retreat.

Later in the interview, Wafer said he was “mad” and “full of piss and vinegar” and went to his front door with his gun to scare the person or persons who had been banging on his door.

In his closing argument on Wednesday, Aug. 6, Assistant Wayne County Prosecutor Pat Muscat told jurors that Wafer “wanted a confrontation” with the neighborhood kids he thought were harassing him, and taking his shotgun to the door is not how you scare someone.

“That’s how you scare someone,” said Muscat as he racked Wafer’s unloaded 12-gauge Mossburg pistol grip shotgun in front of the jury.

When asked how she felt, Monica McBride, mother of Renisha, told reporters, “I’m not ‘piss and vinegar,’” referring to Wafer’s police interview statement, and said she had “kept the faith” throughout the trial. Prior to leaving the courtroom, McBride hugged prosecutors Athina Siringas, Pat Muscat and Terry Anderson.

Walter Simmons, father of Renisha McBride, said Wafer was now “where he belongs.”

Ron Scott, a long-time community activist and friend of the McBride family, was quoted in the Detroit News as saying the verdict represented “a quest for justice and the rule of law over acrimony and vengeance.”

“She just wanted to go home, but she ended up in the morgue because the defendant picked up this shotgun, pulled the trigger, and blew her face off.”

This is how Wayne County Assistant Prosecuting Attorney Pat Muscat began his closing argument in the trial of Theodore Paul Wafer for the murder of Renisha McBride on Wednesday, Aug. 6. The jury impaneled to hear the case began deliberating before noon and was dismissed for the day around 4 p.m.

Wafer, a 55-year-old airport maintenance worker is charged with second degree murder and manslaughter in the death of the 19-year-old Ford Motors employee. Wafer shot McBride in the face with a Mossburg 12-gauge pistol grip shotgun in the early morning hours of Nov. 2, 2013, he says, due to fear that someone was attempting to break into his home because of loud “banging and knocking” noises he heard at his front and side doors.

McBride had crashed her car several hours before arriving at Wafer’s house. Her family has speculated that she was seeking assistance. McBride had wandered away from the site of the crash without her cell phone or keys.

Prosecutors portrayed Wafer as being fed up with the deterioration of his neighborhood. They also posited that Wafer was being harassed and decided to strike back.

Wafer testified that he was a little edgy since his car had been paintballed by unknown neighborhood kids approximately two weeks before he killed McBride. “He wanted a confrontation, he wanted to show those kids that shotgun, because he had had enough, enough of the paintball, enough of the drug paraphernalia [on his lawn],” said Muscat.

Describing McBride as “drunk and disoriented,” Muscat said “[Wafer] shot her through a locked door.”

Defense attorney Cheryl Carpenter began her closing argument by asking the jurors, “Does Ted Wafer look like a man who was out of his mind with anger that night?”

According to Carpenter, there are only two questions that matter in this case: Was her client “in fear for his life or great bodily injury?” and “was it imminent?”

Carpenter then began to reiterate the main points of her defense, at times using a projector and bringing out Wafer’s screen door and its insert for emphasis. She reminded the jurors that the burden of proof, which she likened to “a big boulder, a big burden, is on the prosecution, not on the defense.”

She told the jurors she hadn’t heard how the prosecution disproved self-defense, which is what Wafer has argued throughout the trial, although his first statements to police were that the shooting was accidental.

Reading to the jurors the instructions on self-defense, Carpenter told the story of Dr. Ossian Sweet, an African American, who in 1925 faced an angry mob for moving into a white neighborhood.

The mob threw rocks at Sweet’s house, and shots were fired from the home into the crowd, killing one white man and wounding another.

Carpenter argued that the fatal shots were fired after the Sweet’s window was broken, similar to Wafer’s case where he fired a fatal shot after his screen – “part of his house, on his house” – was broken by Renisha McBride.

“That jury sent Dr. Sweet home. I ask you all to send Ted home. Find him not guilty.”

As part of the prosecution’s rebuttal, Assistant Prosecutor Athina Siringas took offense at Carpenter’s evoking of the Sweet trial.

“I guarantee you, if an armed mob came to Ted Wafer’s door, he would not be here (as a defendant),” Siringas said.

Jurors sent a note to the judge requesting several items before retiring from deliberation for the day. They asked for a board and markers, Ted Wafer’s gun, Wafer’s screen door and a tape measure, and the clips that came from Wafer’s screen door.

The last request could not be accommodated since the clips had not been entered into evidence.

Thandisizwe Chimurenga is a community journalist and the author of “No Doubt: The Murder(s) of Oscar Grant.” She writes for Black Agenda Report and has reported for the L.A. Watts Times, KPFK Evening News and Free Speech Radio News. Read her work at http://www.thandisizwe.net/, email her at tchimurenga@gmail.com and follow @idabeewells. 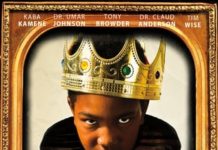