The internet was founded by the United States government and was made accessible to the masses in the mid ‘90s. Since then, it has revolutionized how people access information and how quickly they can get information on almost anything from sources internationally. 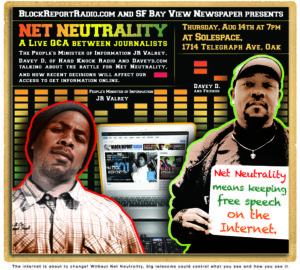 Now there is a battle going on between grassroots people across the country, small media organizations and media activists against a major attack on that speedy access by giant telecom and media conglomerates. The issue is Net Neutrality – making all websites, large and small, rich and poor, just a quick click away. Big media and telecoms want to get rid of it so they can make more profit by charging rich and powerful website owners for quicker access, a fast lane, leaving those who can’t pay in the slow lane, their sites abandoned because they take too long to load.

Journalist, activist and media analyst Davey D of www.daveyd.com and Hard Knock Radio, sat down for this Q&A to inform our community about the battle at hand, which we should be aware of, since it can affect our ability to receive and get information out. Check out Davey D in his own words.

M.O.I. JR: Can you tell the people what is Net Neutrality?

Davey D: Net neutrality is what has made the internet a level playing field and a viable alternative to traditional media. The way things work with radio, TV and print is that one usually has to have a lot of money to operate. On top of that, you need money to distribute what you produce and you need money to advertise. This has meant that only a handful of rich and powerful people can effectively use what we commonly call “mass communications.”

Those rich and powerful people have taken something that should be for the public good and made it strictly for profit, with particular demographics of people being main targets. So for example, if you watch local newscasts here in the Bay Area, you will notice they always do human interests stories or have a camera crew out in the small town of Walnut Creek. Many have asked why.

What’s so special about Walnut Creek? Well, in that city, there are rich white viewers and Neilsen boxes that reflect television ratings. Sadly in 2014, many advertisers only want to appeal to rich white audiences in places like Walnut Creek as opposed to working class Black or Brown audiences, so the end result is programming and stories are highlighted that appeal to them.

A story about Deshawn from Castlemont High School in East Oakland graduating is not as appealing as Sally from Walnut Creek who just won a spelling bee or lost her cat. So with limited space and tight resources, media giants wishing to make a buck will put the story of Deshawn on the back burner.

Net neutrality is what has made the internet a level playing field and a viable alternative to traditional media.

The internet gave the Deshawns of the world and people who want to write and highlight them a clean shot. A newspaper like the SF Bay View, which doesn’t have a fraction of the budget of the New York Times or MTV could compete because anyone on the internet has access. Everyone big or small is one click away. Being one click away is the fundamental principal of the internet and what Net Neutrality is all about.

Over the past few years the big telecom companies and major broadcasters, many who initially ignored, resisted and then were late in getting on the internet, found that they were losing ground. Audiences that they once ignored found new homes and new media outlets on the internet that spoke to them.

Many of these outlets were small startups or blogs, which, while not having or making a whole lot of money, have been able to effectively get important stories to the public. Those stories included the NSA spying, Trayvon Martin, Stop and Frisk abuse, Oscar Grant, immigration battles. The list goes on. Lots of stories ignored by mainstream media were blown up on the internet.

The big telecoms and media giants started lobbying Congress and other lawmakers and spent over a billion dollars to change the rules governing the internet. The main thing they wanted changed is to get rid of Net Neutrality. They argued that big companies should be allowed to set it up so that some outlets are one quick click away while other outlets, smaller and less affluent, are many minutes away.

In other words, if I surf the internet and go to the New York Times or MTV, those sites would pop up on my browser quick and fast, but if I went to the SF Bay View it might take 20 or 30 seconds for each page to load. In some instances it might not load at all or take an extra long time, because some big telecoms who provide internet service might decide they don’t like the content or feel it competes with what they are offering.

So some companies might slow down your content because you favor Palestine over Israel. Or you may be an artist who is in competition with a major label. They might slow it down if you are a phone company using the internet and charging a low rate and the big telecoms want to charge a higher rate for similar services and find you to be too much competition.

So in a nutshell, Net Neutrality means everyone on the internet is one click away. Without it, those who have money and can pay hefty fees would be one click away while everyone else is four or five clicks away.

So in a nutshell, Net Neutrality means everyone on the internet is one click away. Without it, those who have money and can pay hefty fees would be one click away while everyone else is four or five clicks away.

M.O.I. JR: Which companies are against Net Neutrality? Why?

Davey D: Most of the major telecom companies are against Net Neutrality. AT&T and Verizon are the ones who led the charge and got the laws changed so they could speed up or slow down content accessibility. Comcast is also against it.

Many major broadcasters and networks are against Net Neutrality. In the case of the telecoms, it means they can make millions by charging folks to have their work accessible by one click. The major broadcasters want to eliminate the competition. Many big newspapers don’t want bloggers being in the same space as them.

For example, over the past few years major newspapers pressured Google to create a separate space for “news” when you do a search. So today you will rarely see a blog or small news site in the same arena as the big media outlets. Without Net Neutrality, it would be hard for you to access that site even if you know its name.

Many major broadcasters and networks are against Net Neutrality. In the case of the telecoms, it means they can make millions by charging folks to have their work accessible by one click. The major broadcasters want to eliminate the competition.

M.O.I. JR: Who are some of the congresspeople who were bought off by these internet companies?

Davey D: Former Black Panther Bobby Rush made a deal with AT&T a few years back to support getting rid of Net Neutrality in exchange for a Tech Center in Chicago, which never materialized. He’s gotten tons of money in campaign contributions, and events he’s a part of are sponsored by many of these outlets. Others are Congressman Gregory Meeks of New York, Corrine Brown and Alcee Hastings from Florida, Bennie Thompson from Mississippi, Texas Congressman Marc Veasey of Dallas and Lacy Clay of Missouri.

Check out this article to get the full 411: http://blackagendareport.com/content/big-sell-out-congressional-black-caucus-and-internet.

Sadly the major civil rights groups who often get sponsored by telecom outlets sold us out on this as well. What’s been attractive for them is knowing that in the end they as an organization and their cronies will have fast lane accessibility. They will be the only game in town and folks will have to lobby them to get critical information out to the masses. Here’s an article on that: http://www.republicreport.org/2014/leading-civil-rights-groups-just-sold-out-on-net-neutrality/.

M.O.I. JR: How will the end of Net Neutrality affect the average person?

Davey D: The average person with a website will have to pay every single service provider a fee if they wish to have their content easily accessible, meaning one quick click away. There are hundreds of providers all over the country and each one that has an audience you wish to reach may want to charge you to reach that audience.

So you might have to pay Comcast one fee, AT&T a fee, Verizon a fee and the service provider in some small town in Mississippi a fee. Some companies might not even allow you to pay a fee. They can pick and choose who they want to make accessible.

M.O.I. JR: Where is the struggle for Net Neutrality at now?

Davey D: Millions of people are pushing to have the FCC (Federal Communications Commission) classify the internet as a utility, which would prevent the telecoms from doing this. Right now we are in the middle of a comment period where folks are contacting the FCC and members of Congress asking them to protect Net Neutrality. Go to FreePress.net or Electronic Frontier Foundation (EFF.org) for more info.