This morning, Monday, Oct. 27, 2014, at 8 a.m., I woke up to sounds of hard banging at my door. I thought it was the person to fix my broken heater, but once I looked outside my peephole I saw what I thought were two sheriff’s officers. My heart pounded thinking something terrible had happened to my child if two officers are standing outside my door with full blown police gear on.

I opened the door and was anticipating horrible news that no mother would want to hear. But I quickly learned these two officers, one Mexican woman one African American man, were not sheriff’s deputies and they were not the local police.

They were two agents of the California Department of Corrections and Rehabilitation’s Special Service Unit (CDCr SSU) wearing long police jackets, badges hanging around their necks that looked just like sheriff’s badges and black bulletproof vests on the outside of their uniforms with “POLICE” in huge letters across the middle. They asked me if I was who I was and I said to them, “Who are you and tell me why you are here?”

Special Agent Gregory Hopkins pulled out his ID and showed it to me, but I had him take it out of his wallet because I could not believe that CDCr officers were actually standing at my door. They said they were at my door due to a postcard I had recently mailed to inmate Sitawa Nantambu Jamaa (Dewberry) whom I have been corresponding with since 2011 both since he arrived at CCI Tehachapi SHU and, before that, when he was at Pelican Bay State Prison SHU Short Corridor.

I would not answer anything until they explained to me why they were at my door. I asked, “Am I under arrest?” They said, “No, we just want to ask a few questions.” They tried to get into my house and they threatened me, saying, “We can do this here or we can take you to the local police department.” I informed them that they can stand right where they were and that they do not have a warrant to come into my home and I have not done anything wrong.

So the two SSU officers stood outside of my door and showed me a postcard I had mailed Sitawa – my mail has not been restricted to or from anyone in prison. I was quite surprised they were at my door for a postcard.

They told me that they were “concerned” about the “meaning” of how I had “worded” things and they were concerned that it was “criminal” activity. I could not help from breaking out in laughter in front of them. I informed them that I just got mail from Sitawa last week and I get correspondence from numerous inmates from all different prisons, including from other inmates at CCI Tehachapi, in the course of my human rights advocacy.

These two SSU agents let me look at the postcard for a moment. It was a postcard I had written due to the Institutional Gang Investigators (IGI) withholding inmates’ mail, including any mail to and from Sitawa and other inmates. They barely let me glance at the postcard, since the woman agent did not really want me to see it.

They told me that they were “concerned” about the “meaning” of how I had “worded” things and they were concerned that it was “criminal” activity.

The male agent showed it to me, though I was half asleep, just waking up. On the postcard, I had commented to Sitawa, “I am the queen, and my man spoils me.” I wrote about two sentences saying something like “those IGI better not purposely tamper with my mail to you or anyone else; if they do, they’ll be playing with fire.”

I also wrote to Sitawa that my favorite county is Kern County, since I was born in Bakersfield and Kern County is where my family is from. I was responding to a letter Sitawa had written me just a week prior.

Those SSU agents wanted to know the meaning of my postcard. I informed them, laughing, that I meant exactly what I wrote. It’s true that IGIs tamper with mail all the time. And I explained that what I meant by playing with fire was that I would expose their human rights violations publicly and get attorneys involved. I informed them that I have the freedom of speech to tell someone that Kern County is my favorite because I was born there.

I have done nothing wrong and I will continue to use my voice to advocate for prisoners’ human rights to help those tortured and voiceless to get the help they need for better, more humane conditions.

I was shocked at what happened next. I informed the two SSU agents that I have been advocating for prisoners’ human rights for the last three or four years publicly to get better conditions for the men being tortured inside solitary confinement at CDCr. I said I have written many inmates of all different races and have sometimes been pushy – demanding justice for prisoners being badly abused – because that’s just who I am.

The SSU agents said they were concerned now due to “who I am with,” since my man is validated with CDCr, and they said to my face that they believed I was going to harm someone. I laughed and said, “Harm someone?!”

They said yes, we are concerned you are going to go “kill someone” because of your involvement with your husband. I was blown away and said, “If you are accusing me and my man of doing criminal activity, then I think I need a lawyer.”

They responded: “No, I didn’t say that. We are not accusing you all. We just want to know what is the meaning behind your writing in the postcard.”

I told them there is no criminal meaning at all – only my human rights advocacy. I was simply responding to a letter from Sitawa the week prior and insisting that the IGIs not tamper with Sitawa’s mail. I informed the agents that I had just bought a radio for Sitawa’s cellie because of the inhumane conditions the inmates in CCI are experiencing and, since Sitawa is a good friend of ours, I wanted to make sure he is not stuck in isolation without anything to do.

I informed the SSU agents that I am a well-known prisoner human rights activist and by them showing up at my house, they are proving that retaliation and harassment by CDCr officers for advocating for inmates’ human rights is real. Note that California Department of Corrections agents are NOT police officers, but they came to my door wearing full blown police gear, impersonating real police officers and threatening me as if they were about to arrest me for a postcard I legally mailed through the United States Postal Service.

They kept wanting to speak about my husband and imply he was doing criminal activity, and I told them that was not true. I politely said: “So since I am a law abiding citizen, I have a clear record, my man spoils me with love because I have respect for human rights and have helped many people of all races for years, I am a writer for the San Francisco Bay View National Black Newspaper and now I am in love with a man labeled the Mexican Mafia, then I am going to be labeled a “criminal” merely because I wrote a postcard that had no criminal wording and no threats?”

I informed the SSU agents that I am a well-known prisoner human rights activist and by them showing up at my house, they are proving that retaliation and harassment by CDCr officers for advocating for inmates’ human rights is real.

I informed the SSU agents that I do not know about any criminal activity and I do know that my man has not been involved in any criminal activity or else he would not have been on general population for almost a year in Step 5 of the Step Down Program. Keep in mind that I was in my pajamas while all this was going on.

They were surprised that I admitted to writing that postcard. I said yes, I wrote that, and I know it was a bit pushy, but look what the IGIs do to the inmates. They threaten them, harass them, beat them, withhold medical care from them.

And now I am being accused and harassed not by the police or sheriff but by the CDCr Special Service Unit at my door at 8 a.m. over a postcard I mailed to Sitawa Nantambu Jamaa (Dewberry), who is a good friend of mine, and for supporting Sitawa’s human rights or just speaking to Sitawa.

The male special agent, Gregory Hopkins, left me his card “just in case you need to talk.” I informed him that he can tell CDCr that CCI Tehachapi SHU is going to be exposed real soon in the media and CDCr is going to be exposed legally for what they do illegally – showing up at people’s houses accusing prisoners’ family members of being in a “gang” just for a writing a postcard and accusing family members of serious criminal activity just because we are in love with a person in prison falsely labeled a Security Threat Group (STG) member or associate.

This is how we are treated now. This is what happens to family members, regular citizens who advocate for the human rights of those in prison. Our rights are violated!

I have done nothing wrong and I will continue to use my voice to advocate for prisoners’ human rights to help those tortured and voiceless to get the help they need for better, more humane conditions.

We stand by Sitawa Nantambu Jamaa (Dewberry) in unity and with all those men of the like mind and heart at CCI Tehachapi SHU and ASU to hopefully get better conditions and shut down solitary confinement once and for all!

Kendra Castaneda Perez is a prisoner human rights activist and writer. Her significant other is Raymond “Chavo” Perez, K-12922, who is one of the 12-man Representatives Body responsible for the historic Agreement to End Hostilities. He survived 18 years in the Pelican Bay SHU Short Corridor until January 2014, when he was transferred to General Population in California State Prison (CSP) Sacramento (New Folsom) on Step 5 of the Step Down Program. Kendra can be reached at kendrachavoperez@gmail.com. 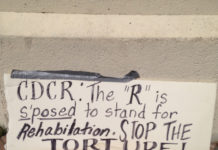 Gov. Jerry Brown, AG Kamala Harris and CDCr officials, you have the power to stop torture in California prisons