A 1968 book-length report, titled “A Study of the Manpower Implications of Small Business Financing: A Survey of 149 Minority and 202 Anglo-Owned Small Businesses in Oakland, California,” was sent to the Bay View by its author, Joseph Debro, prior to his death in November 2013, and his family has kindly permitted the Bay View to publish it. The survey it’s based on was conducted by the Oakland Small Business Development Center, which Debro headed, “in cooperation with the small businessmen of Oakland, supported in part by a grant, No. 91-05-67-29, from the U.S. Department of Labor, Manpower Administration, Office of Manpower, Policy, Evaluation and Research.” Project co-directors were Jack Brown and Joseph Debro, and survey coordinator was Agustin Jimenez. The Bay View is publishing the report as a series. A prolog appeared in the December 2013 Bay View, Part 1 in January 2014, Part 2 in February, Part 3 in April, Part 4 in May, Part 5 in June, Part 6 in August, and this is Part 7 of the report.

Occupational shifts among Negroes in the 20th century

The history of technology in the United States is inextricably related to Negro labor and business conditions. During the 18th and 19th centuries, the country was characterized by its rural and agricultural nature. With the advent of mass production, a steady and inexorable shift occurred, resulting in an urban, industrial society with many people leaving Eastern and Southern farms and towns and migrating to Northern and Western cities.

On a different level, the demands for greater amounts of education and training increased with each new decade as technology and the exigencies of a highly developed economy unfolded (see Table III). Because of the brutal manner in which the prevailing white society has deprived colored persons of education, social status, political power and many possibilities for participation in the field of employment, Negroes have been able to adjust only partially to the challenges of a metamorphosing economy.

At the close of the Civil War, most Southern Blacks returned to the soil to take up or continue as day laborers, contracted wage earners, sharecroppers, or cash tenants who had a lien on their crops. They did not become landowners in sufficient numbers to create a significant impact on poor whites in agricultural labor or upon white landowners in general. For the most part, no threat was posed to whites by Negroes in agriculture.

The picture was quite different in the skilled crafts, factories and on the docks, where keen competition prevailed. White employers no longer looked favorably upon apprenticing Negroes as was the case in ante-bellum days. Those skills which Blacks could teach themselves gradually became obsolete.

With technological progress, certain “dirty” jobs were cleaned up, and were consequently reclassified as “white men’s work.” Then too, women began entering the labor market thereby creating an additional hazard to the employability of Negroes, since the social norms prevented white women from working alongside Black men, especially in the South (Ross, 1967:10-11).

The expansion of American industry at the turn of the century was earmarked by unprecedented increases in gross national product and by dramatic increases in the total number of persons in the labor market. The demand for industrial workers was so great that recruiters were sent to the South to hire Black farmers for Northern factories. Negroes were employed in industries where racial barriers were weak, or as strikebreakers. Strikebreaking opened up opportunities for Black labor in coal and iron mines, iron and steel mills, lumbering, tobacco and meat-packing. But at the same time, Negroes were being eliminated more and more from work in hotels, white barber shops, docks, skilled construction and railroad occupations (Ross, 1967:12).

The expansion of American industry at the turn of the century was earmarked by unprecedented increases in gross national product and by dramatic increases in the total number of persons in the labor market. The demand for industrial workers was so great that recruiters were sent to the South to hire Black farmers for Northern factories.

The relative gains in Negro employment were drastically curtailed with the Great Depression of the ‘30s. According to Ross (1967:14), three interwoven developments were at play: the collapse of cotton cultivation in the South, the decline of opportunities for employment in cities, and the invasion of more and more traditional Negro jobs by whites.

In the 10-year span between 1929 and 1939, the number of acres of cotton land dropped from 43 million to 23 million acres. Negroes dependent upon the soil were displaced in large numbers. Flocking to the cities, Blacks found themselves “located at the bottom of the occupational pyramid, because they were concentrated in industries sensitive to the business cycle, and because they were subject to sharper discrimination in a period of job scarcity. Under these circumstances, the now familiar differential between Negro and white unemployment appeared in the statistics for the first time” (Ross, 1967:14-15).

The number of manufacturing, mining and technical jobs in which Blacks were involved declined by about 400,000 between 1930 and 1940, and a similar decline was evident in wholesale and retail trade, where Negro involvement sank from 398,000 to 288,000 persons during the same time span.

As Negroes left employment in urban centers during the decade of the Depression, whites invaded these positions at every opportunity, often with the collusion of employers, unions and the law. Negroes were removed from barbering, plumbing and other occupations by municipal ordinances in the South (Ross, 1967:15).

White waiters, porters, common laborers and domestics replaced their Black counterparts. In some factories, since Negroes generally held the lowest, most vulnerable positions, layoffs affected them as a group far more seriously than whites.

Were it not for the New Deal and public relief measures bringing food and some wages to impoverished families, the Negro during the Depression would have been entirely destitute.

The process of Negro familial breakdown, which traces its incipience to the first days of slavery, was accelerated by the Depression, which forced husbands to leave their wives and children so that the latter might receive welfare. The spectre of economic dependence, still so fresh in the minds of those who had come out of bondage just 70 years before, loomed large.

The paternalistic plantation system was being replaced by the equally paternalistic welfare system. It is difficult to assess to what degree the New Deal jeopardized the Black man’s role in the family and his subsequent attitudinal constellations about his relationship to predominantly white institutions. It is certain, however, that his economic level had fallen to an all-time low since the end of the Civil War.

When the Second World War began, Negroes did not recover from the Depression nearly so quickly or so effectively as whites. The need for unskilled labor declined even more, especially as whites improved their educational status, and new skills requiring advanced training came to be more in demand.

Whites were even better organized within the labor movement than before, and thereby managed to secure most of the jobs in the defense and armaments industries. Negroes could no longer be used as strikebreakers.

Demand was still present for unskilled laborers in airport and all types of military construction. Employment in iron and steel mills, chemical factories, sawmills and the meat-packing industries was still strong. But discrimination was still in evidence in big industry, as A. Philip Randolph noted in 1941:

“The most conspicuous and consistent denial of employment of Negroes which can be attributed almost directly to union influence is found at the Boeing Aircraft Corp. in Seattle, Washington. From the very beginning of the National Defense Program, the Boeing Co. has given as its excuse for not employing Negroes the fact that it had a contract with the Aeronautical Mechanics Union, Local 751, International Association of Machinists, AF of L, and that the union accepts white members only (Proceedings of the 60th Annual Convention of the American Federation of Labor, 1941, p. 250, quoted in Hill, 1967:395).

The net effect of the War, however, was to increase Negro employment in industry as well as in the armed services and in public service. The war created not only more jobs but an increased variety of occupations as well.

Negro identification with jobs as domestics and agriculturalists began to fade; however, progress was confined primarily to the blue-collar jobs. By the end of the fifth decade of the 20th century, there were still very few Negroes in clerical and sales jobs, professional activities, and in small or large businesses as managers and proprietors. In the area of public service, only in teaching had significant gains been made.

On a different level, the demands for greater amounts of education and training increased with each new decade as technology and the exigencies of a highly developed economy unfolded (see Table III). 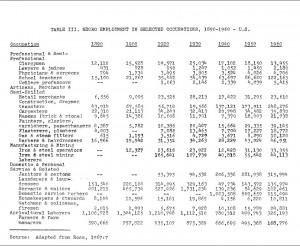 The decade of the ‘50s witnessed the Korean War and relatively greater gains in income and job diversification for Negroes. Unemployment rates declined, and income levels from salaries and wages reached an all-time high of 62 percent of that of whites in 1951. Again significant gains were made in manufacturing, public administration, nursing, hospital work and teaching, but only small increments were made in wholesale and retail trades.

The general trends in terms of increase in total numbers of Negroes employed and proliferation and elaboration of occupational categories open to them continued into the ‘60s. These trends have been maintained as a result of the relatively high labor demand necessitated by an economy heavily dependent upon military contracts, and a government which is absorbing more and more personnel as it grows in power and influence over America.

Negroes have come to play an ever more important role in the government. Victories such as the two mayoral posts captured by Negroes in Cleveland and Gary, Indiana, in 1967, plus the pervasive Anti-Poverty Program, in addition to the Department of Housing and Urban Development, have all been new steps designed to increase Negro involvement in the labor force.

Although these agencies are still in their infancy, they have demonstrated their capacity to absorb large numbers of minority persons into their ranks, thus expanding the proportion of Negroes in white collar, administrative and professional fields.2 The ‘60s have also witnessed the emergence of more Negroes in sales jobs – jobs which came about as a result of surveys assessing the tremendous untapped market for white manufactured goods in Negro neighborhoods.

With the appearance of a cadre of Negroes with considerable experience and background in sales and management, the distinct possibility exists that a business oriented tradition may yet develop, as we shall see later on. Meanwhile, let us examine some aspects of Negro participation in the labor force in recent years.

Footnote 2: The role played by government at the federal level is confusing. There are the highly visible examples of Robert Weaver, secretary of HUD, Thurgood Marshall in the Supreme Court and numerous middle management jobs in OEO, HUD and HEW.

If one examines the various agencies and departments microscopically, one will notice that most of the high level Negro jobs are in race relations areas. The Black jobs are not in procurement and supervisorial areas. The Small Business Administration has some 70 odd regional and area administrators, none of which are Black. Of the few Negroes employed by this agency most of them are in a commercial way.

Although there has been a very large increase of Negroes in middle positions, the quality of this increase leaves much to be desired.