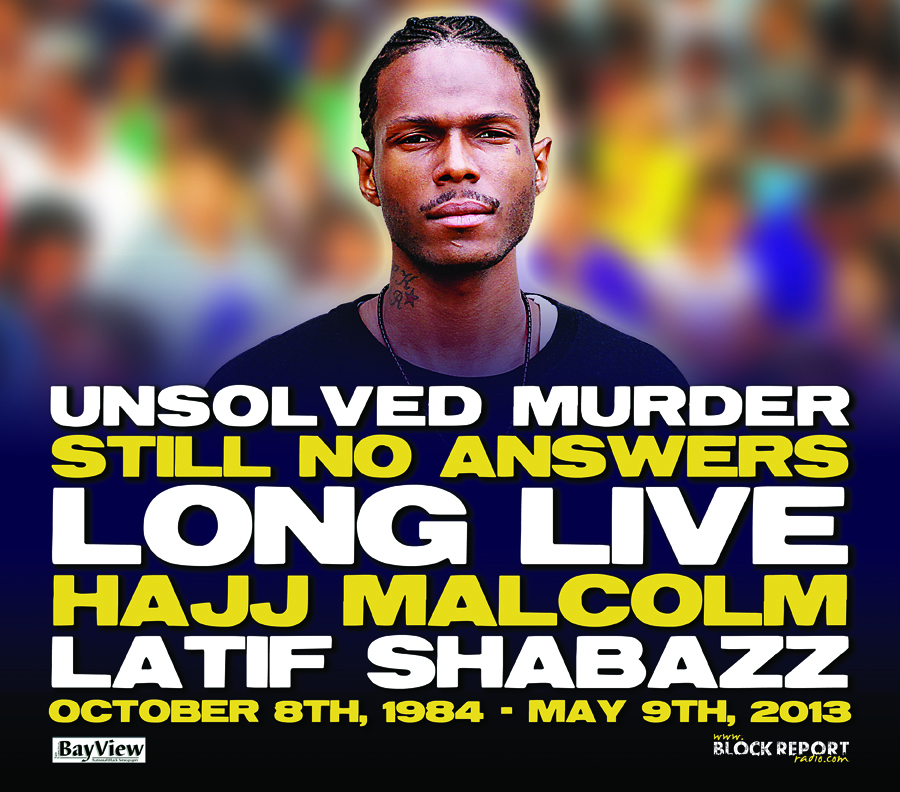 It’s been over a year since the murder of Malcolm Shabazz in Mexico City. The only thing that we have seen as a result of the Mexican police investigation into this crime is two mugshots of two Mexican men that they claimed were responsible for his murder, but no word of a trial, verdict or a sentence. As time goes by, it becomes clearer and clearer, even to the most skeptical of people, that this was a straight up assassination, like what was done to Malcolm’s grandfather and great grandfather.

Oct. 8 will mark Young Malcolm’s 30th birthday, and it is a must that we regularly commemorate the people who mean something to us, especially those who have fought for our human rights. I traveled nationally and internationally extensively and knew Malcolm Shabazz as a man who was fighting his own demons, while at the same time fighting the demons of many of us internationally on the platform that he was given because of the respect for his lineage.

He fought battles that he did not have to fight. He could have let people pamper him while he just sat back enjoying life.

He spoke to troubled youth all over the nation. I personally witnessed him speak to youth at the East Oakland Youth Development Center, Homies Unidos in East Oakland, a summer program in Dallas, Texas, and in at-risk high schools in Philadelphia. The youth would be unruly until they heard who he was and his personal story, as well as where he was planning to go.

He inspired youth who were hard to reach, because that was him in his early days. He also spoke at colleges and universities – UC Berkeley, Temple and Medgar Evers, to name a few. He was a very highly sought after speaker on the Black nationalist and revolutionary circuit as well as on the Muslim circuit.

People were constantly trying to interview Young Malcolm about his history and his thoughts on contemporary issues. When we went to Tripoli, Libya, with the international peace activist Cynthia McKinney, the late Muammar Qaddafi asked personally for him to speak.

Malcolm easily moved between hanging out with Bay Area rappers like Mac Mall to hanging with world leaders like Samia Nkrumah from the Ghanian Parliament and the daughter of the great Kwame Nkrumah at summits organized by the African Union.

I wanted to talk to somebody who really knew Malcolm well, and who Malcolm cared a lot about, Sheikh Hashim Ali Alauddeen. This man was Malcolm’s Imam as well as spiritual father who looked out for him in every way conceivable. Check out Sheikh Hashim as we talk, and remember our comrade and Brotha Hajj Malcolm Shabazz …

M.O.I. JR: How did you meet Young Malcolm? When and where?

Sheikh Hashim: I had a friend of mine, Sheikh Jafar Muhibullah, an African American Shia Muslim scholar, tell me that he had met young Malcolm while studying in Syria at the Islamic Seminary of Hazrat Zainab. After they had met, Jafar had us both friend each other on Facebook.

After some time Malcolm started chatting with me on Facebook and through our conversations about Islam and the state of African America we started to become closer. It was also then that Malcolm asked if he could return to the states to live and study Islam in my home. I said for what your father has done for me and our people, I would be honored. He then a week later flew to Miami to live with me.

M.O.I.JR: Be it that El Hajj Malik Shabazz was Sunni and you’re a Shia Muslim, how where those first interactions?

Sheikh Hashim: Malcolm was actually a Shia when I had met him. The school in Syria is a Shia school named after the daughter of Imam Husayn, the grandson of the Prophet Muhammad, who was martyred in the fight against extremism and oppression within the Muslim community. So there was no problem when we spoke.

He told me he became Shia while in prison when a half Iranian and Mexican inmate gave him books on Shia Islam. But I need to say that there are some Shia, like some Sunnis, that practice extremism and are against each other. Malcolm, like myself, believed in the unity of all Muslim and oppressed peoples and rejected separation and disunity.

M.O.I. JR: Can you talk a little bit about what it was like for Malcolm when he was preparing to go to Mecca for the first time for his Hajj?

Sheikh Hashim: That’s a funny question with a nice anecdote to go with it: When Malcolm came to live with me, he had braids in his hair. One of our debates was about presentation to the people. I said braids were cool, but a cleaner look for him might make his presentation better for more people.

He said, “No way! I will never cut my hair.” I said, “Watch, you are going to cut your hair in the end.” I then made some calls for him to make the Hajj to Mecca like his grandfather did.

And at the end of Hajj, each male pilgrim, after their first Hajj, must cut their head bald and be “reborn” like a newborn. So when he returned, I joked with him and said I could not get you to cut your hair, but Allah did. We laughed about it a lot and he never grew his hair back after the Hajj.

He did nothing special to prepare for the Hajj except prepare his soul to meet His Lord at Kaaba, the altar of life.

M.O.I. JR: What did he tell you struck him the most?

Sheikh Hashim: One can say that everything he said about his trip was like what his grandfather said in the autobiography: Unity of God and the unity of people together worshiping the One God. I remember him calling me from a pay phone near the Kaaba to tell me how things were going. In his voice was happiness that I never heard before or after that in his voice.

He had found his peace while visiting Mecca. He also joked with me about how he had been able to go inside the cave called Hira, where the Prophet Muhammad (AS) first received revelation. He was so excited and joked with me because I told him that I was not able to make it inside the cave and regretted it; it was too crowded when I went.

M.O.I. JR: What did Young Malcolm love about California?

Sheikh Hashim: Malcolm loved Cali because as a OG friend of mine, Shaykh Hamza, said, the Bay Area is the homeland of African American activism. I would add that the Bay is also the homeland of free speech, social movements and counter culture in general.

So Malcolm loved the historic culture of standing up and speaking out for justice. He said he got more love in Cali and the Bay in particular than in New York. The only other major city where he felt that activism was Chicago.

M.O.I. JR: Can you talk a little bit about his fascination with Tupac and the Black Panther Party?

Sheikh Hashim: Well Tupac was a Panther Cub and had a pedigree of activism. Malcolm X in many ways is the inspiration of the BPP (Black Panther Party), so young Malcolm had a love for Tupac and the BPP-BLA (Black Liberation Army) membership because of their commitment and love for the legacy of his grandfather.

I was blessed to have personally known and interacted with both. Malcolm loved Tupac’s revolutionary energy, but heck, who doesn’t like Pac’s positive contribution to our struggle except a Tom. Free Mutulu! by the way.

M.O.I. JR: What did Malcolm have to say to you about our trip to Libya, where he met Qaddafi?

Sheikh Hashim: Oh, he loved his trip for multiple reasons. One was that Malcolm’s father was North African, and so he was returning to his Moorish heritage.

Meeting Qaddafi was an honor that he cherished and always spoke positively about. He was honored that Qaddafi had requested to meet him. He said it showed him how respected his grandfather was around the world.

He was also happy to meet with the descendants of martyred Patrice Lumumba from the Congo. He also spent a little time with Samia Nkrumah, the Ghanian Parliamentarian and the daughter of the late great Kwame Nkrumah.

He had the opportunity to travel and socialize with African world leaders, including ambassadors, parliamentarians, kings, queens, princesses and sultans. He was also honored to have officially spoken and opened up for international peace activist Cynthia McKinney, who was the head of the delegation, and the revolutionary leader Muammar Qaddafi himself.

M.O.I. JR: What was his purpose in going all over the country speaking to young people?

Sheikh Hashim: He was just trying to give back and help raise all people to be the best they could be, both Muslim and non-Muslim. He loved helping young people to reach their potential. He mentioned to me how honored and touched he was when he spoke with, then took a picture with a youth group at the EYODC in Deep East Oakland.

M.O.I. JR: What is the legacy of Young Malcolm?

Sheikh Hashim: That’s a hard one, but I would say, the same as his grandfather: Seek for truth, rise for justice, and treat people with love and mercy.