San Francisco GIANTS vs. Kansas City Royals WORLD SERIES PLAY generated a lot of money on Third and King Streets, where AT&T Park is located, and lots of businesses in the area. Chump change trickled up Third across Evans for those selling T-shirts on one or two lots.

Had to file my copy before the final results of the winner, so will take a chance and screeeam, “HOW SWEET IT T’IS, the GIANTS HAVE WON THE WORLD SERIES, three-time WORLD CHAMPIONS – 2010, 2012, now 2014!”

GIANTS done good, without superstars, but team work: 2010, 2012 now 2014. Looking at K.C. ROYALS players – would be nice to get K.C. Players like LORENZO CAIN and JARROD DYSON – just to give the Giants some BLACK FLAVOR – IF YOU CATCH MY DRIFT!

There’s a lot of history in Kansas City, BLACK NEGRO LEAGUE and Jazz Museum. Visited the city in mid-‘80s – I loved KC and the history of 12th Street and Vine.

Well, had to file my copy before the final results of the winner, so will take a chance and screeeam, “HOW SWEET IT T’IS, the GIANTS HAVE WON THE WORLD SERIES, three-time WORLD CHAMPIONS – 2010, 2012, now 2014!”

MOVING ON – SURPRISED when I received an e-mail from MS. CECELIA KENNEDY, reference “Third Street Stroll” JULY column, where I covered the block on Third between Newcomb and McKinnon; reminisced about her late parents, Emmit and Dorothy Kennedy, and Club Long Island, and Kennedy Liquor store (changed to Market). Of which she owns the building, but leased out! Reported my SHOCK when I learned that the property was in FORECLOSURE!

Seems Ms. Kennedy was unaware of the article UNTIL October, when a friend told her about it! She communicated to this writer, via e-mail, Oct. 10, her concern that folks might misinterpret she mismanaged the finances, when the facts are entirely different, and wanted to get the truth out! SHE HAD HER IDENTITY STOLEN, and the loan in foreclosure was a total sham. According to her attorney, MICHAEL ROONEY, this has been confirmed by the IRS criminal investigation unit, and the perpetrator is behind bars.

Ms. Kennedy is FIGHTING HER CASE! through her attorney MICHAEL ROONEY. In response to the July 2014 article “Third Street Stroll,” Cecelia Kennedy has contacted the San Francisco Bay View (this writer) to tell her side of the story. “Ms. Kennedy claims in a lawsuit pending in San Francisco Superior Court that she was a victim of identity theft in connection with the foreclosure of 4600 Third, and was duped by a man who is accused of conning at least half of a dozen others in a massive mortgage fraud operation and who is presently behind bars.

“Ms. Kennedy appreciated the support of the Bay Area community and hopes that her example will be a lesson to con men and lenders who try to collect on fraudulent loans, that residents the Bayview will fight back!”

HEY, THREE STREET – AND BAYVIEW IN PARTICULAR – DID YOU VOTE??? Election Day Nov. 4! If you didn’t, you can’t COMPLAIN if your candidate, especially in the District 10 Supervisor race, did not win – incumbent MALIA COHEN challenged by heavyweight candidates Ed Donaldson, Tony Kelly, Shawn Richard and Marlene Tran!

Speaking of Supervisor Cohen, want to thank the SUPE and her office – YOYO CHAN, Legislative Aide – for taking care of those four darkened street light lamps at BAYVIEW’s KC JONES Park (Third, between Armstrong and Bancroft ) that presented a safety issue located across from the Armstrong Senior Apartments.

OH, before I forget – WING STOP franchise, which occupied the ground floor retail space, there at Armstrong Place, CLOSED its doors end of August!

HEY, THREE STREET – AND BAYVIEW IN PARTICULAR – DID YOU VOTE??? Election Day Nov. 4!

On the subject of politics, earlier this year, the WILLIE B. KENNEDY DEMOCRATIC CLUB was formed in tribute to the late former San Francisco Supervisor (1981-1996) for her enduring legacy of public service and community empowerment in San Francisco and the greater Bay Area. Officeholders include Bayview resident and community activist DR. TOYE MOSES, President; DR. VERONICA HUNNICUTT, First VP.

Mrs. Kennedy was a fine woman of distinction, caring, passionate above all she endeavored to make a difference – a better life for many. Years after office she continued to serve her community, especially the LAST bastion for Black folks – Bayview Hunters Point! Kennedy passed June 28, 2013, age 90. The dynamic lady’s birthday would have been Nov. 5.

OH, HAPPY DAY! It’s wonderful to receive one’s FLOWERS WHILE ONE CAN STILL SMELL THEM!!! Sister DOROTHY COOK, mesmerized by their fragrance, beautifully dressed in gold colored suit, matching hat, celebrated her 80th birthday in what was a magnificent BIRTHDAY musical in her honor at CORNERSTONE Missionary Baptist Church, located in the Bayview, corner Third and Paul, Saturday afternoon, Oct. 18. My heart warmed, as others, in enjoyment of the program. HOW SWEET IT WAS!

A member of OLIVET Missionary Baptist Church, Rev. Steven Bailey, Pastor, for 67 years, Mrs. Cook smiled over the beautiful program, focused on her love and devotion through her ROBES Symbols. Her service is far reaching!

REUNITED with an old friend, BARBARA SPEARS, of Seattle, Washington, visiting her cousin MARY LOU FLEMINGS at Dr. George W. Davis Senior Center, when stopping in to hear the afternoon LIVE BIRTHDAY JAM, featuring GUITAR MIKE and his POSSE. Barbara and I go back to the days when I moonlighted at the popular HALFNOTE Nightclub, when on Divisadero Street, during the ‘60s, both cocktail waitresses.

MOVING ACROSS TOWN – to YOSHI’s San Francisco … NOV. 1, the nationally renowned nightclub’s name will change to THE ADDITION! Fillmore Street won’t be the same when they take the signature YOSHI’s SIGN down!

SUDDENLY! BARBARA DAVIS RETURNS TO THE FASHION STAGE! The celebrated FASHION DIVA and PRODUCER has been off the scene about 20 years – a lady who was BEFORE her time, producing FABULOUS shows in San Francisco that featured clothing from Macy’s and other well-known high-end department stores and boutiques, often featured at the St. Francis Hotel on Union Square! Mark your calendar – “Suddenly It’s Magic,” Saturday, Nov. 15, at Scottish Rite Center, Grand Ballroom, 1547 Lakeside Drive, Oakland. TIX INFO (510) 259-1210.

SHOUT OUT to – GARY AND THERESA DEROUN-LYNCH – the loving couple celebrated their BIRTHDAYS at their Delta home in Rio Vista on a Saturday all day affair, inviting many of their friends and many customers of The Monte Carlo Club, which they sold last summer … Bay Area ENTERTAINMENT legend BLUES JOCK FRANKIE M, formerly of the famous radio station KDIA, on the sick list. SEND him some love!

LEST WE FORGET – THE JONESTOWN MASSACRE – NOV. 17, 1978! Cult leader JIM JONES of PEOPLE’S TEMPLE, located on Geary, near Fillmore, now U.S. Post Office, led more than 900 followers in a mass suicide in the jungles of Guyana, known as the Jonestown Massacre. Clearly remember the horror felt by the FILLMORE community in particular – families split, many joined up with Jones’ church felt he offered hope – a better land – milk and honey kinda’ thing in Guyana where they perished – BLACK FOLKS! Many attended churches in the Fillmore. WE SHOULD NEVER FORGET THIS HORRIBLE TRAGEDY! 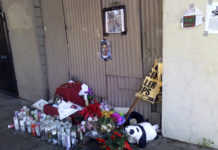 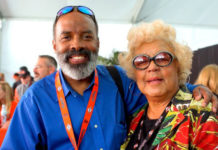