We do not count to this society and this world. We can be driven from our homes, beaten, tortured and murdered with impunity. We are placed outside of citizenship and even humanity. When we insist on our dignity, when we take our place in the cities and in the discussions and when we resist the violence that constantly rains down on us like an endless storm, we are shown to the world as criminals.

We are expected to suffer and die in silence. We are expected to leave a world for our children in which their only future is suffering. We are not alone in having to live under this cruelty. In Palestine, in Haiti, in the Congo and in the favelas of Brazil and the gecekondus of Turkey it is the same.

We have been facing serious repression recently. We have been facing bullets, evictions and lies. But in the middle of this storm we have been having a series of meetings with the Congolese refugee community in Durban surrounding the on-going genocide in the DRC. Abahlali[1] have vowed to stand in solidarity with our comrades here and those who remain facing abuse and butchery in their country.

Together we need to understand how it is that in this world so many people’s humanity is not recognized. We also need to understand what we can do to overturn this system that makes some few people rich while the rest are made poor, driven from their land and their homes and turned into some kind of animal that can be freely killed.

We reiterate our position that “unyawo alunampumulo,” a person is a person wherever he or she comes from. The pain of our Congolese comrades is our pain. We call upon ordinary South Africans to stand in solidarity with Congolese as they say to us that they see South Africa as the root of Africa and DRC as the heart of Africa.

In the same way, Abahlali have buried enough of our comrades who have been assassinated for exposing these greedy agents who steal from the public purse. We are saying enough is enough. We shall not keep quiet and watch while our comrades are being murdered by the police that are paid by politicians. It is a disgrace that our lives are being used to exchange money by politicians.

Four of our comrades have been killed within a space of 18 months: Thembinkosi Qumbela, Nkululeko Gwala, Nqobile Nzuza and Thuli Ndlovu. At around 8 o’clock last night, Mobeni Khwela, an ANC activist working against Nqola’s corruption in KwaNdengezi, was gunned down. We extend our deepest condolences to his family.

We also have more wounded comrades as a result of these gangsters who are based at City Hall. Durban’s land invasion unit and the police work under the instruction of these gangsters. The Durban City Hall is running with the blood of the people it should be serving with integrity. Those who pay the izinkabi[2] are welcome in this hall. Yet those who stand for justice are considered criminals in this hall.

“Away with the capitalist monopolies that continue to enrich themselves with the mineral wealth of the DRC.”

We acknowledge and salute our friends, partners and comrades around the world who are standing in solidarity with us at this trying time. We note with a particular interest the tireless solidarity efforts our comrades in London are demonstrating. Just as others stand with us when we face oppression, so too it is our responsibility to stand with others facing oppression.

We will be marching together with our Congolese comrades on Saturday. We have asked the minister of police, Mr. Nkosinathi Nhleko, to come and receive our memorandum regarding assassination and other violent crimes against Abahlali. We have also asked for the MEC (member of the Executive Council) for Human Settlements in KwaZulu-Natal Mr. Ravi Pillay to come and receive our memorandum on the brazen housing corruption that continues to reign in our province.

Our Congolese comrades have asked the DRC ambassador to South Africa to also come and receive our memorandum. The Department of International Relations has been also informed of this march and the need to intervene. We hope all these public officials will honor our demands and act accordingly.

We will be marching together with our Congolese comrades on Saturday. We have asked the minister of police, Mr. Nkosinathi Nhleko, to come and receive our memorandum regarding assassination and other violent crimes against Abahlali.

Abahlali demand that the death list created in Ward 101 and Ward 12 in Durban and at the high ranking political sphere must be investigated and exposed.

Abahlali demand that gangsters and warlords that hide behind party politics must be exposed and arrested.

Abahlali baseMjondolo (Shack Dwellers Union) is the largest social movement of the poor in post-apartheid South Africa. To learn more, visit http://www.abahlali.org. This story was edited by Ntokozo Khumalo.

[1] Abahlali is an isiZulu word meaning dwellers. Abahlali baseMjondolo is a grassroots organization and movement of those displaced in and around the area of Durban city which is in the province of KwaZulu-Natal, South Africa. The name of their organization directly translates to “dwellers of shacks.”

[2] Izinkabi is isiZulu slang for police, comparable to “pigs” in English. 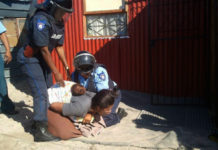