News & Views World News & Views Hands to the fire: Rebellion spreads from Ferguson and Ayotzinapa to the...
Facebook
Twitter
Email

“Fire is more of a social reality than a natural reality … Respect for fire is a respect that has been taught; it is not a natural respect … what we first learn about fire is that we must not touch it.” – Gaston Bachelard, French philosopher, author of “The Psychoanalysis of Fire”

Rebellion is a fire that spreads quickly, can’t be controlled and illuminates paths mired in darkness. As children we are taught not to play with fire. Fire is dangerous. It will burn you. While the obvious consequences of being burned will not be questioned here, the recent burning of a few buildings in Mexico and the U.S. have been central in exposing the inherent violence and contradictions of the state and capitalism.

The doors of the presidential palace were burned in Mexico. Gas stations, liquor stores and even a pizza place were burned in Ferguson. Police cars were burned in both sites. Demonstrators were tear gassed, beaten and arrested by cops. Rather than questioning police violence, mainstream media, which is largely influenced by corporate and dominant political interests, criminalize protestors outraged by the continued shootings of Black and Latino youth by white police officers.

Subcomandante Moises of the Zapatistas commented on the burning of the presidential palace doors in Mexico City:

“They forget that for a while now these doors have been meant to signal to those outside of them that they had nothing to do with the decisions made inside.

“They forget that these doors are now merely part of a useless shell within which sovereignty is simulated but servility and submission reign. They forget that behind these doors there is just a huge mall which the people outside can’t enter, and where the broken pieces of what used to be the Mexican Nation are sold off.

“Your word, your rebellion, your resistance.”

Rebellion is a fire that spreads quickly, can’t be controlled and illuminates paths mired in darkness.

While mainstream media attempts to narrate the burning of buildings and cop cars as “violent,” it turns a blind eye to the societal violence made visible by the shooting of innocent children by police, such as 12-year-old Tamir Rice, Black teenagers such as Michael Brown and Trayvon Martin, and Oscar Grant who was handcuffed and face-down while he was shot by a Bay Area Rapid Transit police officer in Oakland, California. UCLA American History Professor Robin D.G. Kelley calls this a “war against the Black and Brown underclass.”

This current wave of criminalization and oppression is tied to historical violence that has been systematically targeted against communities of color.

There is a fire that burns within everyday people. Fueled when disrespected or dehumanized, this fire ignites when people in our community are shot and killed by police. It is nurtured when those same people realize they are not alone and learn that this rage is shared by many.

In Ferguson, a focused and deliberate rage burns down the illusion of the American dream, a nationalist dream embedded in the psyche of many Americans for generations.

The struggle in Ferguson has inspired those who face and live in similar circumstances and has shifted the national narrative regarding the high level of racial injustice in America.

There is a fire that burns within everyday people. Fueled when disrespected or dehumanized, this fire ignites when people in our community are shot and killed by police. It is nurtured when those same people realize they are not alone and learn that this rage is shared by many.

A reclaimed sense of dignity is expressed collectively through the process of organizing from below, convening and assembling a grassroots politics that speaks directly to the roots of racism and how many people profit from the continued violence against the Black and Latino community. While the state attempts to “restore trust” with police, Mumia Abu Jamal wonders “when was there ever trust in the first place?”

In Ayotzinapa, the search continues for the 43 students who were disappeared on Sept. 26. In Mexico, there is a shared understanding of the existence and prevalence of the narco-state, which makes for a society where it is very difficult, if not nearly impossible, to make the distinction between the official government institutions and those that are criminal. Corruption and exploitation are terms that are too simplistic to define the current situation; it is systemic.

The families of the disappeared have a simple demand: “You took them alive; we want them back alive.” This demand is not only focused on the 43 students but also taking into account the more than 26,000 people that have been forcefully disappeared or are missing since former president Felipe Calderon took office in 2006.

The families of the disappeared Ayotzinapa students have organized a caravan to link with community-based movements across the country. Among the sites they visited to share their word and their struggle were the Zapatista communities in Chiapas. Their visit was oriented toward building a political strategy that doesn’t depend on the “incompetence of state institutions.”

The Zapatistas responded to the students’ families by stating:

“Your word was and is for us a source of strength … We know that there is a lot of noise coming your way. We don’t want to be one more noise. We only want to tell you not to let your word fall. Do not let it grow faint. Make it grow so that it can be heard above all of the noise and the lies. Do not abandon your word … in it walks not just the memory of your dead and disappeared, but also the rage of those who today are below so that those above can be up there.”

To put our hands in the fire requires us to demystify the social reality that has been imposed from above, to strengthen community, and to understand that autonomous alternatives exist but are hidden in the embers, under the flames of rebellion.

Armando Carmona is an editorial intern at Toward Freedom, where this story first appeared. Contact him at armando2k7@gmail.com. 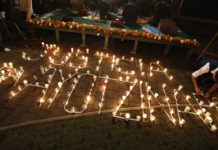 A silence that speaks: Ayotzinapa, the Zapatistas and the politics of listening

Reflections and dialogue with the Global South