by Kevin Zeese and Margaret Flowers

This week tens of thousands of people in the United States flooded the streets to demand racial justice. It is one of many issues that have been building for years, reaching the tipping point and seeming to explode in a national awakening. We also saw that in the last two weeks with national protests for living wages.

Four years ago when we organized the occupation of Washington, D.C., at Freedom Plaza, we listed 15 crisis issues that the country needed to face; poverty wages and the injustice in criminal enforcement, including racially abusive police practices, were two of them. None of these 15 core issues has been adequately dealt with. In each there are people working to build support for their cause; each has the potential to explode on the national scene – some already have.

This newsletter examines five current campaigns and mobilizations that are demanding social, economic and environmental justice.

In our last newsletter, we described how people in 170 cities took to the streets and shut cities down over the Ferguson grand jury decision. Since then, protests have continued, even throughout a holiday weekend; and then, at 1:01 p.m. on Monday, thousands walked out of high schools, colleges and workplaces and took to the streets in a national die-in.

One woman, Knox College women’s basketball player Ariyana Smith, took action by herself, protesting during the Star Spangled Banner at a basketball game with her hands up and then falling to the ground for 4.5 minutes when it was over. Smith explained it was a last resort.

After the Staten Island grand jury decision, protests in New York City and throughout the country were so large that even the mass media had to extensively report on them. The nationwide protests are already resulting in government officials announcing plans to review policing in their communities and more action by the federal government to investigate local police. The NYPD knew this was coming – thousands had marched protesting Garner’s death this summer – so they sent investigators to Ferguson to gather intelligence on professional agitators.

Police abuse, harassment of African Americans and killings of civilians has been going on for years. There is a long history of the NYPD (and other police) killing unarmed African Americans, as well as a history of grand juries not indicting police who kill citizens. The injustice in the U.S. justice system has become so evident that the United Nations is strongly criticizing police and prison practices in the United States as well as torture abroad.

While politicians are now talking about changes to police training, increased use of cameras on police and other reforms and the Department of Justice is taking action, protests must continue and be sustained in order to achieve the necessary changes . For example, there are sustained protests planned at the Department of Justice in Washington, D.C., every Monday at 4:00 p.m. We must be uncompromising in our consistent demand for justice.

Another issue that is increasing its people power and political strength is the reality of millions of U.S. workers receiving poverty wages. In the last two weeks we have seen two national days of action by people seeking living wages. Economic injustice has deep roots but now it is beginning to be addressed.

Three years ago these mass actions would have been unthinkable, but over the past three years people protested at Walmart and workers walked off their jobs on the biggest shopping day of the year, Black Friday. This year there were protests and walk-offs at 1,600 Walmarts in 49 states, the largest ever. The protests will continue to grow until Walmart starts paying people living wages.

The movement has not only grown geographically but also now includes more categories of workers. This year, baggage handlers, skycaps, wheelchair attendants and aircraft cleaners from 10 major airports supported the strikers as the “Fight for $15” movement continued its spread to new industries.

And, in two years of organizing, 8 million low-wage workers have seen raises. The lesson from this experience is that organized people can build power and create change.

This coming week is a key one for the Trans-Pacific Partnership (TPP). Trade negotiators arrive in Washington, D.C., on Sunday evening and we will be at the U.S. Trade Representative office to welcome them.

On Monday morning, we will greet them with a “Sit-in to End Secrecy,” where we’ll deliver an open letter calling for them to release the text of the TPP to the public. This will be followed by a noon rally. Please join us for this historic opportunity to stop the TPP.

If you can’t be in Washington, D.C., then take action to demand an end to secrecy in trade negotiations. You can sign a petition and get emails of key trade officials here. Write them and demand transparency – release the text. Secret negotiations are an injustice and are inconsistent with democratic governance.

Last month European trade negotiators announced they will be releasing their positions on trade and giving the people of their countries the transparency that is essential for a functioning democracy. They wanted to release the text of the full agreement, but the Obama administration continues to insist on secrecy. Tell the U.S. to release the text!

For the last two years we have successfully fought off attempts to pass fast track trade promotion authority. Without fast track it will be very hard for the TPP and other trade agreements to become law.

This week President Obama told CEO’s of transnational corporations, which will profit from rigged trade at the expense of the people and planet, that he is willing to defy Democrats and work with Republicans to pass fast track. We will not let that happen. We have been successful so far, and with your help we can continue to stop rigged trade.

This Thursday, Dec. 11, 2014, the Federal Communications Commission will hold a public meeting. They have taken the future of the Internet, net neutrality, off the agenda. Protests led to President Obama supporting our position: reclassifying the Internet as a common carrier and enacting net neutrality rules. We must insist that the FCC stop dragging its feet on net neutrality!

We need people to join us at the next meeting with the message, “Reclassify Now!” We are calling on people to attend a rally at 9 a.m. outside the FCC at 445 12th St. S.W., Washington, D.C., and then to attend the public hearing at 10:30 a.m. Bring a small sign (8 ½-by-11-inches suggested) to hold during the meeting. Messages should focus on calling for Title II reclassification now without delay.

This is another example, just like the TPP, of people-powered strategic actions winning. As we reported in a recent newsletter, when we started this campaign eight months ago, nobody thought it was possible to achieve reclassification and net neutrality. After months of actions, we have turned the politically impossible into the politically inevitable. Help us finish the job!

No doubt one of the most critical issues facing humans is the ecology of the planet: Climate change and extreme energy extraction undermine our health and safety as well as leading to a massive species die-off. The scientific literature on climate change is clear: Humans need to rapidly transition to a clean energy economy, end our reliance on fossil and nuclear fuels and leave oil, gas, coal and uranium in the ground. It is time to stop building infrastructure for carbon and nuclear-based energy and switch to energy efficiency and renewables.

This week we participated in the launch of a new coalition, We Are Cove Point, to stop construction of the first liquefied fracked gas export terminal on the East Coast and the first one ever to be placed in a neighborhood. Residents of the community have been fighting Dominion Resources since they learned about the terminal a year ago, but the courts and local, state and federal governments have ignored them.

The federal permit for the project was issued in late September by the Federal Energy Regulatory Commission (FERC) despite the absence of safety and environmental impact studies. More permits will still be required from the state of Maryland.

We visited the community in early November and were appalled to see that the terminal is surrounded by nearly 2,400 homes, including 19 day care centers and two elementary schools, and that the only evacuation route is a two-lane road that passes by the terminal. In the event of a chemical spill or explosion, the community will be trapped.

Even if no accident occurs, the terminal will dump 20.4 tons of toxins and 3.3 million tons of greenhouse gases into the air each year, will consume 210,000 gallons of fresh water from the local aquifer each day and will contaminate the waterways upon which the local economy depends. All of this risk and damage to export gas abroad. The only beneficiary will be Dominion, while the community and the environment pays the costs.

The dangers of Dominion’s gas export terminal extend to all of us. If completed, it will drive fracking of the Marcellus Shale and construction of more pipelines and compressor stations which will endanger other communities throughout the region. And if the Marcellus Shale, which extends from New York to Ohio and down to Virginia and Tennessee, is fracked, it will release millions of tons of carbon that will worsen the climate crisis. 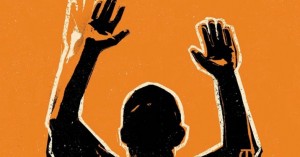 Inspired by We Are Seneca Lake, members of the Cove Point community joined allies in a nonviolent direct action training last Sunday followed by three days full of actions to resist construction and raise awareness about the efforts to stop the export terminal. We were pleasantly surprised by the enthusiastic support and warm welcoming from passersby. The community was happy to see people taking action to protect their health, safety and economy.

Over the past month, 29 people have been arrested resisting the terminal. We have plans to continue organizing and resisting. We need your help. Stopping Dominion’s export terminal is an issue that should unite everyone concerned about climate and the environment.

It is another opportunity to unite people across geographic and issue areas and build a campaign that can stop the construction of this terminal. We see multiple avenues toward victory – even though, as is so often the case people say it is impossible.

But to achieve success, we need to get more people involved. Visit WeAreCovePoint.org and sign up to participate in what will be a historic victory against carbon infrastructure. The Cove Point terminal is the KXL pipeline of the Marcellus Shale. We must stop it!

One of the chants we often use in actions is “The people are rising, no more compromising!” It is beautiful to see this rising together for a better world.

On all of these issues and more, we are united in our desire for justice – and together we are a powerful force.

Kevin Zeese is an attorney who has been a political activist since graduating from George Washington Law School in 1980. He works on peace, economic justice, criminal law reform and reviving American democracy. Reach him via Twitter at @KBZeese. Margaret Flowers is an organizer with Popular Resistance, which provides daily movement news and resources and where this story first appeared.