Congolese took to the streets this week to protest until the Congolese Parliament backed down on changes in election law that would have allowed President Joseph Kabila to remain in power beyond constitutional term limits. Reuters photographed graffiti in the streets of Kinshasa that said, “No Kabila Rwandais,” or “No Rwandan Kabila.” 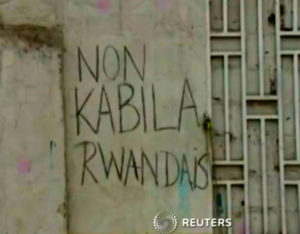 KPFA Weekend News Anchor David Rosenberg: A widely feared and anticipated military attack by U.N. and Congolese troops on the FDLR, a Rwandan refugee militia in the eastern Democratic Republic of the Congo, has not materialized, despite U.N. Special Envoy Russ Feingold’s repeated urgings. Instead, this week, the people of the Democratic Republic of Congo rose up in the streets to demand that their Parliament not pass legislation allowing Congolese President Joseph Kabila to extend his stay in office beyond constitutional term limits. KPFA’s Ann Garrison has the story.

KPFA/Ann Garrison: After days of protest in the streets of Kinshasa, the capital of the Democratic Republic of the Congo, and other cities across the country, the Congolese Senate dropped their legislation, which protestors said was designed to keep President Joseph Kabila in power. Instead of extending term limits, a plan already proven unpopular, the Senate had attempted to legislate that a census, which could take years, be completed before the presidential election, which is scheduled for 2016.

A Reuters video on the protests ended with a still photograph of graffiti scrawled on a wall in Kinshasa which said “NON KABILA RWANDAIS,” meaning, in English, “NO TO KABILA, THE RWANDAN.” This message expresses the widespread Congolese belief that President Joseph Kabila is the adopted Rwandan son of assassinated President Laurent Kabila and that he collaborates with Rwanda’s President Kagame in occupying Congo and plundering its resources.

The Rwandan army provided most of the troops who overthrew former dictator Mobutu Sese Seko in 1997 and put President Laurent Kabila in power. Daniel Simpson, U.S. ambassador to the country at that time, was videotaped expressing his satisfaction, saying: “It’s all done. It’s all set.”

Rwanda’s current Defense Minister James Kabarebe then became the commander of the Congolese army and other Rwandans assumed positions of power in the new army and government. But Congolese people soon protested that they had in fact been invaded and conquered, as recorded in this street demonstration.

Laurent Kabila (voiceover): Goma and Bukavu are occupied by the rebels? There are no rebels. Goma and Bukavu are occupied by Rwandans. I told you that they are Rwandans. If only they would stay in this country while respecting the indigenous inhabitants, we would accept them easily. But they come as conquerors, to dominate everyone. This is unacceptable. What language do you want me to express it in to say they are Rwandans? These gentlemen found so much honey here that they want to return.

KPFA: President Laurent Kabila was then assassinated during the ensuing war and succeeded by his son Joseph, who has remained in power since. Many Congolese believe that he is the son of Rwandan parents, that his mother married Laurent Kabila after his father’s death, and that he is secretly allied with Kagame’s Rwanda, a longstanding U.S. ally. Whether or not he is the adopted Rwandan son of the elder Kabila, as many Congolese believe, President Joseph Kabila is without doubt more acceptable to Rwandan President Paul Kagame and his allies.

Oakland writer Ann Garrison writes for the San Francisco Bay View, Black Agenda Report, Black Star News, Counterpunch, Colored Opinions and her own website, Ann Garrison, and produces for AfrobeatRadio on WBAI-NYC, KPFA Evening News, KPFA Flashpoints and for her own YouTube Channel, AnnieGetYourGang. She can be reached at ann@afrobeatradio.com. In March 2014 she was awarded the Victoire Ingabire Umuhoza Democracy and Peace Prize for promoting peace in the Great Lakes Region of Africa through her reporting.