In a blatant violation of the Congolese Constitution and of the rules and regulations governing the DRC health care system, Congolese President Joseph Kabila ordered the seizing of the bank account of Panzi Hospital in Bukavu, the hospital founded and run by Dr. Denis Mukwege. This Joseph Kabila, who is called by foreign diplomats in Kinshasa le petit rwandais (the little Rwandan), according to a French official, is persecuting Panzi and Dr. Mukwege in a way that no legitimate president of the citizens of a country should.

Panzi Hospital is an institution and its director, Dr. Denis Mukwege, an icon who should be held as a hero and the pride of the DRC and its president, considering the recognition and the awards Dr. Mukwege has received all over the world. The latest is the 2014 European Union Sakharov Prize for Freedom of Thought, awarded Oct. 21, 2014.

But first, here is the information we received from Panzi Hospital on this criminal and really dumb action by Joseph Kabila and his goons he calls “government” as well as all DRC institutions that are entirely under his orders:

On Jan. 2, 2015, Dr. Mukwege gave a press conference at which he read the press release issued by Panzi Hospital on the previous day and signed by himself. After the reading, he took some questions from the media. The sequence of the events he gave is as follows:

– On Nov. 4, 2014, Panzi Hospital filed a lawsuit against DGI complaining that its action was discriminatory and that it blatantly violated both the DRC Constitution and the rules regulating the health system of the DRC. Panzi’s lawsuit also demanded that this illegal and discriminatory measure be lifted.

– Yet, the following day, Tuesday, Dec. 30, 2014, the tax agency re-seized Panzi Hospital funds without an explanation, written or oral, contradicting its own decision of Dec. 29, 2014. This is how lawless DRC has been under Joseph Kabila.

Panzi Hospital is an institution and its director, Dr. Denis Mukwege, an icon who should be held as a hero and the pride of the DRC and its president, considering the recognition and the awards Dr. Mukwege has received all over the world.

Question to Dr. Mukwege (Q): How do you respond to the statement made to RFI (Radio France International) by the DRC minister of health, Flory Kabange, that Panzi Hospital is a private hospital; therefore, it has to pay taxes? (That declaration had been made the very morning of Jan. 2, 2015, the day Dr. Mukwege was scheduled to give his press conference.)

Answer by Dr. Mukwege (A): Panzi Hospital is a public hospital in the Ibanda Zone of Eastern Congo, one of 500 officially recognized general hospitals in the DRC – and none of them pays taxes. You can go and consult or check the national or official DRC’s health organizational chart …

In my opinion, what was stated this morning has no foundation whatsoever … I am categorical! … As witness the last declaration of the (Congolese) minister of media and information (Lambert Mende Omalanga), who specifically declared that Panzi Hospital is a public hospital …

Thus, I would like for someone to tell us since when has the status of anzi changed from the one stated by the minister (Mende) just a month ago … I believe there are some other reasons behind this persecution.

Q: Is there a connection between the confiscation of Panzi Hospital’s accounts and Dr. Mukwege’s declaration that he is against the revision of the (DRC) Constitution (so that Kabila can run for a third term, which is prohibited by the Congolese Constitution)?”

A: I am not going to speculate. You have to ask this question to those who are responsible for these actions if they have any hidden motives.

Q: If this situation persists, is the hospital going to close?

A: I do not wish that Panzi Hospital closes its doors. It serves over 400,000 people in the Ibanda Zone. Can you imagine closing an institution that serves 400,000 inhabitants? …

Come on, let’s be logical. We’re serving one of the poorest areas around. Where do they want us to get all this money? How much does the hospital make even in one year? …

I believe that there have to be men and women of good will who can understand our appeal and who can convince themselves that this evil has lasted for far too long and that it has to be brought to an end!

Will the world listen and respond?

The evidence available now 20 years after the triggering of the Rwandan Genocide and the ensuing invasion and occupation of the DRC by Rwanda and Uganda (watch BBC’s documentary “Rwanda’s Untold Story”) compels the world not to continue policies that are erroneous and destructive for Congolese and Rwandan people – policies based on Paul Kagame’s lies and coverup of his crimes of the 1990s.

The free world has physically removed despots and mass murderers who have done and sometimes “planned to do” fewer crimes than those Kagame, Museveni and Kabila have done and continue to do especially in DRC. Why is there NO attention to the over 8 million now slaughtered in DRC, the 3 million gang raped in DRC – the few “lucky” ones are “repaired” by Dr. Mukwege – and the millions displaced in DRC?

The culprits – we ALL know them. It is the trio Kagame, Museveni and Kabila. How many more must die and be gang raped before they’re stopped?

Why does the free world – or why do the powers of the West – continue to support Museveni, Kagame and Kabila, who have killed, together, millions of Congolese and Rwandans? The West knows that Congolese people will sell them their minerals, so why empower Kagame, Museveni and their Trojan Horse Kabila to continue to kill, gang rape and sell you the Congolese minerals tainted with the blood and the agony of savagely gang raped and mutilated Congolese women and tiny little girls of 2 years old?

Let us be frank and blunt: If these deaths, if these gang-raped women, if these children being hacked to death with machetes and hoes were WHITE, would the West still be going to the same people – Kagame, Museveni and Kabila – responsible for these heinous and human-shaming crimes begging them to stop their own crimes while still remaining in power and continuing to enrich themselves to the tune of billions of dollars?

Doesn’t or can’t the West understand that the reason why Kagame, Museveni and now Kabila provide the U.N. with their soldiers in the first place is so that the U.N. and the West can look the other way while the trio kill, rape, mutilate and rob in the DRC? We know one does not need a PhD in order to be able to make this elementary connection.

Back to Panzi Hospital and Dr. Denis Mukwege:

Dr. Mukwege on Jan. 2, 2015: “I believe that there have to be men and women of good will who can understand our appeal and who can convince themselves that this evil has lasted for far too long and that it has to be brought to an end!”

Is the free world, which has sincerely recognized the value of Dr. Mukwege to all of us humans, waiting until finally Kagame, Kabila and Museveni kill him so that the U.N. and the E.U. can, then, construct a monument in his memory – since they tried to kill him before, again and again? This is the question!

This story was first published on the Congo Coalition blog. To learn more, email Congocoalition@hotmail.com. 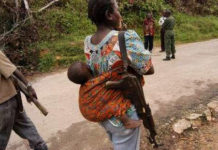 Tired of being gang raped, Congo mother takes up weapon